Stocks: Parts of a Stock

We will now study the parts of a gun stock. 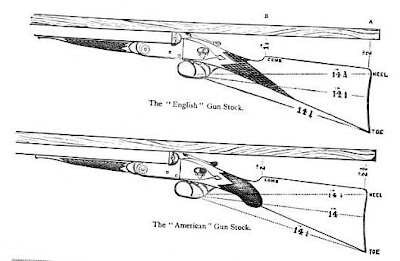 The above image shows a typical English stock and an American one. The English stock was built with dimensions suited for about 80% of the sportsmen hunter population in England. Note that the English stock is built a bit more horizontal than the American one (2 inches displacement at the heel, vs. around 2.5" for the American stock). This is because American shooters generally tended to stand with their heads more erect and the same shooting style was also used in some other English colonies such as Australia and South Africa.

Public domain image from wikipedia.org
In the above image, 1 is the butt plate of the weapon (i.e.) the part that rests on the shoulder, 2 is the fore-end or fore-grip of the weapon. 3 is called the comb, which is the part that the user rests his/her cheek upon. The comb is built to support the user's cheek so that he/she can aim through the gun sights comfortably. Some combs also have a cheek-piece shaped on the side of the stock. 4 is the heel and 5 is the toe of the butt. This particular gun-stock, unlike the other two stocks above, has a grip (6) and a thumb-hole (7) for the user to put their hand through. Hence, this stock is called a thumbhole style stock.
The two types of stock are (a) one-piece stock (i.e.) the stock is composed entirely of one piece of wood and (b) the two-piece stock (i.e.) the butt is made of one piece of wood and the foregrip is made of another piece. The one-piece stock is generally used for bolt-action rifles, whereas the two-piece stock is used for assault-rifles, pump-action, lever action and break-open action weapons. Wooden one-piece stocks are usually more expensive to manufacture than wooden two-piece stocks, because it is harder to find a long piece of wood without blemishes, than it is to find two shorter pieces.
There are many factors important in shaping the stock.
1. Balance: This is the center of gravity of the firearm. If a thin thread is passed around the firearm stock, this would be the point where it would balance upon.

2. Cast-off or Cast-on: This is the amount that the stock is offset from the center when viewed laterally. A thin man may require a lot less cast-off than a fat man with stout shoulders, a right handed user may, due to a deformity, aim with his left eye etc. Usually, mass produced firearms don't have cast-offs, but custom-stocks may have cast-offs since these are produced for individual user needs. A cast-on is similar to a cast-off except it is done in the opposite direction for a left handed shooter. 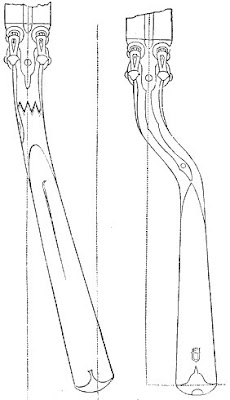 3. Grip: The shape of the grip varies from stock to stock. Some may have the almost horizontal stock as shown in the English stock in the first picture of this article. Some may have a vertical grip like the thumbhole stock or a pistol grip, similar to that seen most modern assault rifles.
Stocks may be solid (i.e.) they do not change shape, or collapsible, such as a folding stock or a sliding stock. Sliding or folding stocks are generally features of military firearms.

In the above picture, we have an US made M4A1. Notice that the stock is two-piece, has a pistol grip and has an adjustable sliding stock at the back of the weapon, which allows the user to adjust the distance between the butt plate and the trigger to their own requirements.
Posted by The Editor at 11:45 PM