In the last post, we discussed the break-open or top-break action. In this post, we will study the sliding barrel action.

The image above shows a French-made Bastin Lepage double-barreled shotgun using pinfire cartridges. This mechanism is fairly straightforward and easy to understand. The stock has a central groove cut along its length and the barrels slide along this groove. The movement of the barrels is actuated by the long lever on the underside of the gun. The barrels move sufficiently forward, so that the user can easily insert cartridges into the barrel. The user then pulls the lever back, which moves the barrels back into position. There is a catch on the stock that holds the long lever in place so that the barrels don't move when the weapon is fired. In practice, the catch never held very well, which is why this action is rarely used these days. 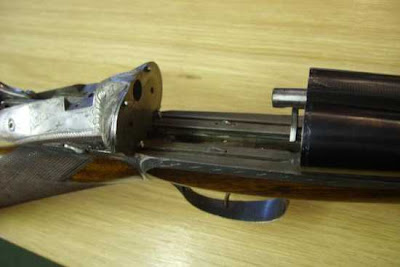 The above example is another double barreled sliding barrel shotgun made by another French manufacturer called Darne. Notice the top of the barrel has a cylindrical projection that fits in a hole on the other side when the breech is closed. Darne started making sliding breech guns around 1897, but the above example was made in the 1950s. Darne still makes shotguns like this to the present day.
This is a rare action and only a few firms like Darne still use it.
Posted by The Editor at 10:46 PM