In the last few posts, we've studied various types of single-action and double action revolvers. These were not the only types of revolver mechanisms though. 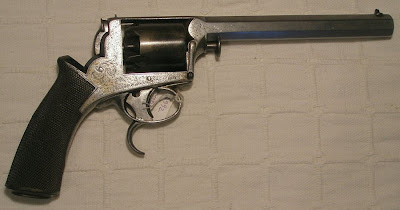 Click image to enlarge
The above image is a Tranter revolver invented by William Tranter. William Tranter used to manufacture the Adams double-action revolver under license and in 1853, he came up with his own invention, a double-trigger, double action revolver. Notice that the distinguishing feature of his revolver is the double trigger. The lower trigger sticks out below the trigger guard and is pulled with the middle finger. When the lower trigger is pulled, it cocks the hammer and rotates the cylinder. Then the user pulls the upper trigger with the forefinger to release the hammer and fire the weapon. If the user decides to fire rapidly, then he/she can pull both triggers simultaneously.
During the US civil war, the Confederates did not have any firearms factories in their territory and hence were forced to import their firearms from other countries. Many Tranter revolvers were imported by them, along with other revolvers such as the Adams and Beaufort-Adams. The Tranter revolvers gained popularity among the Confederates because of their reliability. Tranters were also carried by detectives of the famous Pinkerton detective agency. Pinkerton's men were responsible for the safety of US government officials before the creation of the Secret Service.
William Tranter made a sizable fortune from the sale of various firearms (including his revolvers) and later went on to co-found the Birmingham Small Arms company. This company later moved into manufacturing bicycles, motorcycles and cars. It was once the largest motorcycle manufacturer in the world and its bicycle brand was sold to India's Tube Investments Limited in 1957. Tube Investments still manufactures bicycles in India under the BSA brand.
Another unusual revolver mechanism was invented by the Iver Johnson company of the US. Between 1940 and 1947, they manufactured a revolver with a very special action. If the hammer was down, pulling the trigger would cock the hammer and rotate the cylinder. If the hammer was already cocked, then it would release the hammer and fire the weapon. Therefore, to fire the weapon when the hammer is down, the user would pull the trigger twice.
Another development that has been used since around 1901 or so is the automatic revolver. Basically, the disadvantage of a double action revolver is that it has a longer trigger pull than a single action revolver, because the trigger pull on a double action serves to cock the hammer, rotate the cylinder and release the hammer on a single pull, whereas a single action trigger merely releases the hammer when the trigger is pulled. This leads to a heavier trigger pull and therefore, less accuracy from double-action revolvers.
With an automatic revolver, some of the recoil force from the just fired cartridge is utilized to re-cock the hammer and rotate the cylinder. This results in a revolver that can fire with the speed of a double-action, but with the softer trigger pull of a single-action revolver. The Webley-Fosbury pistol of 1901 had this feature, but it was soon replaced by semi-automatic pistols, which were less expensive. In 1997, a company called Mateba invented the Mateba Unica Auto-revolver that uses the same concept.
Posted by The Editor at 11:32 PM