We've recently seen the falling block action, where the breechblock slides up and down on grooves when a lever is operated. Now we will study another similar action called the Tilting Block action
This is a mechanism that was used in several famous rifles. The original action was invented by one Henry Peabody and was used in the Peabody rifle. In this type of action, the breechblock is attached to a hinge on the rear of the block. When the lever is operated, the block tilts about this hinge and exposes the chamber of the rifle. 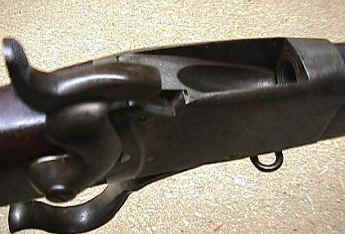 The Peabody action was later improved by a Swiss officer named Friedrich von Martini. In the Martini variation, the lever that operates the tilting block also simultaneously cocks an internal hammer. Meanwhile, the British government started a competition to replace the Snider-Enfield rifle in their service and one of the entries was submitted by Alexander Henry. While the British government liked Henry's rifle barrel design, they did not like his action and preferred the Martini action instead. The result was a rifle that used the Henry designed barrel with the Martini action which was called the Martini-Henry rifle. 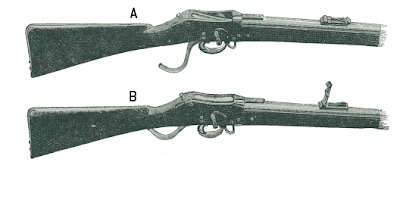 The picture above shows a Martini-Henry rifle. In the top picture, you can see the lever behind the trigger guard is opened, which opens the action and cocks the rifle. The breechblock is tilted forward, exposing the chamber. When the user pushes the lever back, as seen in picture B, the breechblock moves upwards and closes the breech. 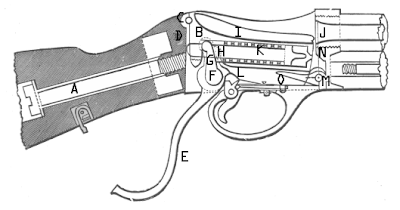 In the picture above, the breech block is B and K is the firing pin mechanism. The top of the breech block I is hollowed out to assist inserting a new cartridge when the mechanism is opened. When the user pulls lever E, it moves the tumbler G, which makes B and K pivot about the pin C. The front end of B and K drop and expose the chamber J, where the user can remove the old cartridge and insert a new one. When E is pulled back, G moves and makes B and K rotate back up so that K is in line with J. When the user pulls the trigger, the hammer strikes the back of K, which moves the firing pin to strike the primer of the centerfire cartridge and discharges the weapon.


The Martini-Henry first entered British service in 1871 and was involved in several British colonial wars, most notably in the Anglo-Zulu wars in South Africa. The Martini-Henry was partly blamed for the British defeat in Isandlwana (along with being caught by surprise, with overwhelming numeric inferiority), but also did extremely well in the battle of Rorke's Drift where 139 British soldiers successfully held off thousands of Zulu troops. A study by the British Army determined that the African climate made the action overheat and foul and the poor quality of the brass in the metallic cartridges and its black powder content were the direct causes of the jamming issue. Later versions (such as Mark II, Mark III and Mark IV) used a slightly longer lever to apply more torque to the action to prevent jamming and they also changed the brass of the cartridge cases with a stronger brass, which made the new Martini-Henry rifles very reliable in battle.
Martini-Henry rifles were later scheduled to be replaced in 1889 by the bolt-action Lee Metford rifle (which had a higher rate of fire), but somehow, they still managed to remained in service with the British Army until the end of WW-I. Martini Henry rifles were also used in many of the British colonies, including Australia, New Zealand and India. They were notably copied by gunsmiths of the Afridi tribe in the Khyber pass region of India (now part of North-west Pakistan) and are still manufactured by them to the present day. It must be noted that these Khyber pass copies are made of inferior quality materials and manufacturing techniques. Hence, the present day Khyber pass weapons are actually of lower quality than original weapons made by the Enfield Royal Small Arms factory in the 1880s! 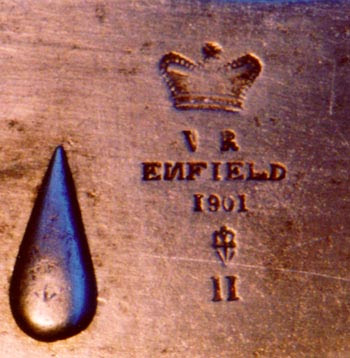 The above picture shows the action of a fake Martini-Henry rifle made in the Khyber pass factories. Note the poorly struck VR (supposed to stand for Victoria Regina after Queen Victoria). Also note the N in ENFIELD is reversed and the D is tilted a bit compared to the other letters indicating the letters were stamped individually. The 1901 indicates the supposed year of manufacture of this rifle (which may actually be true) and the II indicates that this is supposed to be a Martini-Henry Mark II rifle, but unfortunately, this is too late for the Mark II rifle, considering that the Mark IV version was already out in 1888! Also Queen Victoria passed away on January 22nd, 1901, and was succeeded by Edward VII. So unless the rifle was made before she passed away in January, an original rifle should have been marked as ER (for Edward Rex) instead of VR (for Victoria Regina).

Tilting block rifles were also manufactured by Marlin firearms in the 1880s and many are collector items. Since this action is very strong, rifles made using this type of action could fire heavy loads and were good for long range shooting. This action is also suitable for both left-handed as well as right-handed users, as it is easily accessible from either side. The only downside was the manual extraction and reloading of a cartridge. The tilting block weapons started to be replaced when bolt-action was invented, since bolt-actions can also extract the old cartridge and load a new one from a magazine automatically as the action is operated. However, older weapons were not phased out and people still encounter tilting block action weapons today in Afghanistan and Pakistan.
Posted by The Editor at 9:30 PM