Tinfoil cartridges were originally made by Samuel Colt for his revolvers. During this period, paper cartridges were common, but if the paper got wet, it would ruin the black powder. The idea behind using tinfoil was to make a cartridge that was not affected by water as much.

At the time that Colt first started working on tinfoil cartridges, his first company that he had set up to manufacture Colt Paterson revolvers was not doing so well (it soon went bankrupt in 1842, due to lack of sales.) He initially experimented using rubber as the material, before switching to tinfoil. Soon after, the US Government got interested in his developments. In April 1840, the Secretary of War and the Secretary of the Navy asked a mixed board of officers from the Army, Navy and Marine Corps to make experiments and evaluate Colt's tinfoil cartridges. The officers were: Colonel G. Croghan of the Army, Captain C.S. McCauley of the Navy and Lieutenant J.G. Reynolds of the Marines. They met at Washington Arsenal and performed several experiments and wrote a report of the results, an abridgement of which is below:

The tests that they performed for these cartridges may be of interest to readers:

"Experiment 1, April 10, 1840: Twenty six cartridges of tin-foil and as many of paper, were fired from well cleaned muskets, no difference was perceptible."

"Experiment 3, April 20, 1840: Four 6-pounder and thirty musket cartridges, all of tin-foil, which had been immersed in water from the 10th instant, were taken therefrom; two of the 6-pounder cartridges appeared to have been injured by accident, the other two were fired and appeared not to have been injured by the water; a dry sponge was used in these firings, and it was burned each time by the contents left in the gun. The musket cartridges were then examined; sixteen of them were selected for firing, seven of which only could be discharged"

"April 21: In order to test the relative strength of the tin-foil and cartridge paper, strips of each were tested; the foil could not support a weight of forty pounds, whilst the paper did not break with the weight of eighty pounds"

Most of the remaining tests correspond to use in cannon and the tin-foil cartridges left more residue globules in cannon, which is why the board recommended to only use the cartridges for small arms and only partially.

The US Army purchased a few thousand more tinfoil cartridges for further evaluation and in 1843, they placed a large order for 250,000 tinfoil musket cartridges, for the purpose of trying them in field service. This large order was an unexpected gift for Colt, since his revolver manufacturing factory in Paterson had gone bankrupt shortly before in 1842. The funds from the US Army were used by Colt to fund research for his "New and improved revolver" and he attempted to start a new Colt's Patent Manufacturing Company with this money. He also used some of the money to produce a waterproof telegraph cable for his friend, Samuel Morse (the inventor of Morse code and inventor of the single-wire telegraph). Then came the order from Samuel Walker for the Walker Colt revolver and the profits were large enough for Colt to go back into the firearms manufacturing business in 1847. A few years later, Colt also established a factory in London in 1853.

While Samuel Colt was in London, he met a gentleman named William T. Eley, who was in the business of making cartridges in England. William T. Eley was the son of William Eley and nephew of Charles Eley, who had founded the Eley Brothers cartridge manufacturing company in London in 1828 (Eley Brothers later became the largest ammunition manufacturer in the world and the brand name is still used for cartridges today). Together, they developed a new tinfoil cartridge that was granted British patent #1324 in 1855. 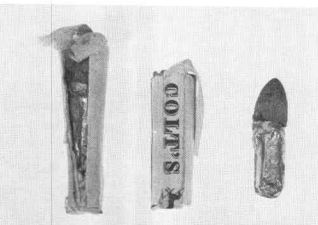 The powder container was made of tinfoil and the lap joint sealed with waterproof cement. The case was then filled with powder and the bullet was inserted to the top and then the end of the tinfoil case was crimped into the base groove of the bullet and then greased, to produce a waterproof cartridge. The cartridge was then enclosed in a paper wrapper, from which it could be easily removed before loading. Due to the shape of the bore of the nipple in Colt's revolvers, the flame from a percussion cap would pierce the foil and ignite the powder, without the need to tear open the foil.

In the above image, the cartridge on the right is of .31 caliber. The one on the left is also a .31 caliber cartridge, but it is enclosed in an additional protective paper case. The one in the middle, is a .28 caliber cartridge in a sectioned case. The case has a tape to pull the cartridge out, which was later copied by other ammunition makers. The side of the case visible to us says "COLT'S" and has a picture of a colt in the bottom, the other side has the word "PATENT".

Another image of a Colt tinfoil cartridge is shown below:

To manufacture these cartridges in the US, Colt set up a separate building, situated about a half mile away from his other factory in Hartford. In this cartridge manufacturing factory, no fire was allowed anywhere near it and the factory was heated by piping in steam, which was generated in a different building outside. 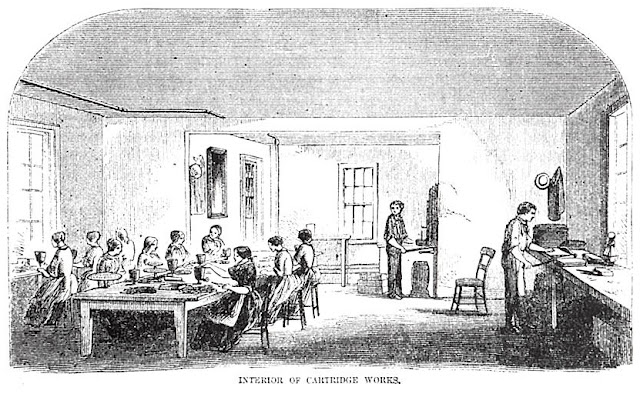 Most of the labor in this factory was performed by women, with the only men around being a foreman, an engineer and a charger.

In our next post, we will study more cartridges made of other materials.