A few weeks ago, we began to study an early form of cartridge: the paper cartridge. Where we left off, paper cartridges had advanced to the point where the paper was treated with chemicals to make it more combustible.

The main problems with paper cartridges are that they aren't very water resistant and the paper is somewhat fragile. As the bullet could be rather heavy, the weight of the bullet could cause the paper to tear as well. There was a need for a cartridge to be made of a more durable material and that's when the linen cartridge was born. 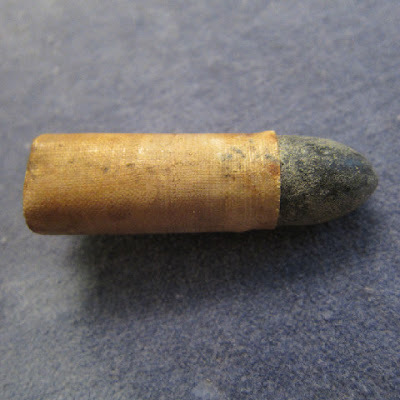 A .52 caliber linen cartridge for a Sharps rifle. Click on the image to enlarge.

For a while, cartridges were made for the Sharps rifle with both paper and linen, but the linen cartridge gradually started to find some backers. In the words of a Major W.A. Thornton:

"The making of Sharps Cartridges with paper must be abandoned and linen must be used in the formation of the cylinder. More care cannot be given in the making of cartridges than is bestowed in our laboratory. The fact is that the ball is too heavy for the paper, and worse than that -- the paper is sometimes softened by the lubric which causes it to break by the weight of the ball. From this date, I will make no more of paper, but I will make the powder cylinder of linen."

What the Major is describing are two flaws of the paper cartridges used by the Sharps rifles. The first is that the weight of the bullet is so great that a paper cartridge cannot hold its shape and often tears open by itself, due to the weight of the bullet. The second problem is that the lubricant (spelled in his letter as "lubric") also softens the paper and weakens it, thereby causing the paper to break. Since the lubricant is necessary to reduce the fouling inside the barrel, a stronger material must be used for the case body and this is why linen was used.

Linen cartridges were used by both the Sharps rifle and the Starr carbine during the Civil War.

In our next post, we will study another durable material that was also used to make cartridges during that period of time.