Since we were discussing cartridge rim types in our recent series of posts, your humble editor decided to go back in time to the first cartridges. We had already discussed paper cartridges some time back when this blog first started, but it might be nice to revisit that topic in detail.

A paper cartridge is simply a cylinder or conical shaped object made of paper and filled with a bullet, some black powder and sometimes, a lubricating substance (such as wax or lard). The paper was often of a thicker type. In later years, a special type of paper, called cartridge paper, was specially developed for this purpose. From a firearms perspective, one of the biggest advantages of paper cartridges was that it allowed the users to reload their firearms quicker than before.

According to W.W. Greener's book, The Gun and its Development, the use of paper cartridges has been going on for a while. It was stated that the soldiers of Christian I, Elector of Saxony (currently in modern Germany), were using paper cartridges in 1586. Interestingly, Christian I of Saxony was from the House of Wettin, some of whose descendants are the Royal family of the UK. Greener also states that in the Dresden museum, there are Patronenstocke and other evidence to show that cartridges were in use, as early as 1591 (since the book was written in the early 1900s and Dresden was bombed heavily in World War II, your humble editor is not certain if the specimens still exist there). Finally, an author named Capo Bianco wrote in 1597, that cartridges had long been in use among Neapolitan soldiers. In England, the British Patent office has a record from 1777, when one William Rawle patented several "instruments for carrying soldiers' cartridges". Therefore, we can see that paper cartridges have been in use for quite a while. 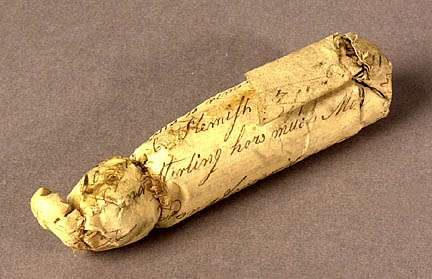 As we studied a long time ago, most of the early firearms were muzzle-loading, with no rifling at all. Early cartridges for such weapons simply consisted of a paper tube with three pieces of thread: two threads tied on each end to seal the packet and a third thread somewhere in the middle to divide the paper tube into two compartments, such as the one in the image above.

To load the musket, the user would use the following process:


Since the quantity of black powder in the cartridge is already measured in advance, this eliminates the  need for the user to measure the proper amount of powder during reloading. Also, since the bullet ball is already wrapped in the packet, the user doesn't need to search around in a separate bag to find a ball for reloading. As smoothbore muskets of the era were loaded with lead balls that were smaller than the diameter of the barrel, the cartridge paper also served as a patch to provide a good gas seal in the barrel.

Paper cartridges of this early type were generally designed with thicker paper, so that they could withstand rough handling.

It must be mentioned that black powder leaves a lot of residue in the barrel, therefore it becomes harder to push the ball in after every shot, until the barrel is properly cleaned. Also, black powder does not like damp conditions very much.

In the next part, we will look at some developments in paper cartridge technology that solved some of these problems, as well as handling newer firearm technologies, such as rifling.