Cartridges Rims: Rimmed vs. Semi-Rimmed vs. Rimless vs. Belted vs. Rebated - Part III

In our last couple of posts, we looked at a few cartridge rim types: the rimmed cartridge, semi-rimmed and rimless types. We will look at a couple more rim types in today's post: the belted type and the rebated rim type.

As we noted in our previous post, the basic problem with rimmed cartridges was reliable feeding from box magazines, as the cartridge rims would interfere with each other in this type of magazine. One way to solve this was to reduce the diameter of the rim, as we saw with the semi-rimmed type of cartridge. Of course, the smaller rim made it trickier to headspace the cartridge in the chamber properly. Around the same time, another type of cartridge was introduced in 1905 to solve both issues: the belted cartridge.

The belt acts similar to the rim for the purpose of headspacing the cartridge in the chamber properly. This design allows smooth feeding through box magazines, but also has the advantage of providing positive headspacing, just like a rimmed design. Most belted type cartridges are designed for high-powered hunting rifles.

Headspacing on a belted cartridge. Click on the image to enlarge. Public domain image.

The origin of this type of cartridge had to do with when black powder was being replaced by smokeless powders, specifically cordite. As we saw in the linked article about cordite previously, cordite is composed of long strings of a light brown color, which are packed into a cartridge case in bundles like spaghetti. The prevailing production method of these cartridges in England consisted of inserting small bundles of cordite into a straight-walled case, which was then necked down to the final shape and the bullet was seated. Because of the long strings of cordite, cartridge cases using this propellant tend to have long sloping shoulders.

When these cordite cartridges were first developed, most rifles were still single shot designs, so they were designed as rimmed cartridges. However, as the bolt-action rifles started to become popular, there began a demand for proper feeding from box magazines and hence, the belted cartridge was developed. The first belted cartridge was the .400/375 Holland & Holland Belted Nitro Express cartridge, and it was specifically developed to compete against the German 9.5x57mm Mannlicher-Schonauer cartridge, which was being adopted by Holland & Holland competitor in England, Westley Richards. However, soon after, a German gunmaker named Otto Bock designed the 9.3x62 mm Mauser cartridge. This cartridge was made to be fired out of the Mauser M1898 rifle, which was designed to be mass-produced and cheaper than most British rifles at that time. The cartridge and rifle rapidly became popular with African hunters, because of its all-round capability to be used against animals ranging from the smallest antelopes to the largest elephants. In response to this, Holland & Holland developed the .375 Magnum Belted cartridge in 1912. The belted design allowed cases to feed and extract reliably in the tropical environments found in India and Africa. The .375 H&H Magnum rapidly became one of the most popular all-round hunting cartridges in the world, and in many regions of the world, it is considered to be the legal minimum caliber allowed to be used to hunt large animals.

For instance, in the 1980s it was desired to increase the power of police pistols which use 9x19mm parabellum cartridge. In response to this, Evan Whildin, a vice-president of Action Arms, designed the .41 Action Express cartridge. 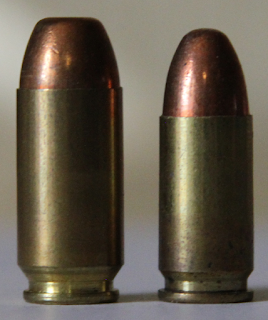 The idea behind the .41 AE was that it allows converting a 9 mm. pistol to use this cartridge, merely by replacing the barrel, mainspring and magazine. Since it has the same sized rim as the 9x19 mm., the other parts of the pistol, such as the extractor claw, bolt, firing mechanism etc., can be reused and therefore, it keeps the total cost of converting the weapon relatively low.

However, when it was introduced, many of the ammunition manufacturers backed the .40 S&W cartridge, which had similar performance, and therefore the .41 AE cartridge didn't become popular. Nevertheless, the idea of using a rebated rim cartridge to interchange with another weapon stayed on. For instance, the .50 Action Express (.50 AE) cartridge is designed to be used with the American/Israeli Desert Eagle pistol. The rim of the .50 AE is the same diameter as the .44 Remington Magnum cartridge, which was the most common caliber cartridge used by the Desert Eagle. By interchanging only the barrel and magazine, a Desert Eagle originally designed for .44 magnum, can be used to fire the .50 AE cartridge.

Happy Halloween everyone and stay safe!