Cartridges Rims: Rimmed vs. Semi-Rimmed vs. Rimless vs. Belted vs. Rebated - Part II

In our last post about various cartridge rim types, we looked at the rimmed cartridge. As we noted in the last post, rimmed cartridges are some of the earliest metallic cartridges developed and they work very well with revolvers and shotguns and rifles with tubular magazines, but not so well with box magazines. There are ways to work around this problem by carefully placing the cartridges in the magazine, as was done by the Lee Enfield and Mosin-Nagant rifles, which we saw in the last post, but these rifles have relatively small sized box magazines with less capacity.

Since box magazines can fit more cartridges in a smaller package than tubular magazines or revolvers, by the end of the 19th century, more and more weapons (especially military weapons) began to feature them and with increasing magazine capacities as well. Therefore, the cartridge rim type needed to be fixed to work well with larger capacity box magazines. There were two different cartridge rim types that were developed to fix this issue:
Semi-rimmed cartridge: This was one of the first attempts to fix the issue with rimmed cartridges and box magazines. The diameter of the rim is slightly larger than the case diameter, but only marginally so. 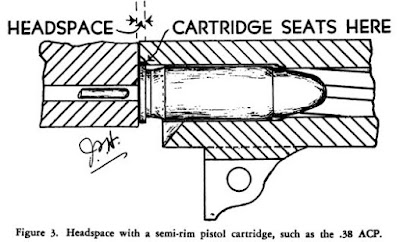 The rim is still used for headspacing the cartridge to the proper depth in the chamber. However, since the diameter of the rim is barely larger than the case, there is less interference with the rim of the next cartridge in the magazine. The rim is wide enough that it is also used by the extractor to pull the cartridge out of the chamber. Examples of semi-rimmed cartridge include the .38 ACP (as illustrated above), the 6.5x50 mm. Arisaka cartridge, the .401 Winchester etc. This type of cartridge is not seen much since the rimless type of cartridge (which we will see below) was developed, but there are still some new cartridges of this type, for instance the .500 S&W Magnum cartridge developed in 2003. 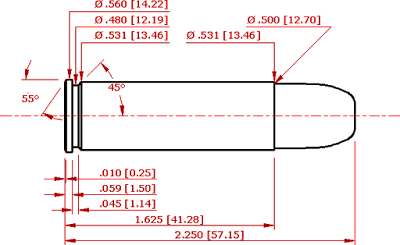 A .500 S&W Magnum cartridge. Click on the image to enlarge.
Image licensed under the Creative Commons Attribution-Share Alike 3.0 Unported by Peter Gnanapragasam

The .500 S&W Magnum rim is used to headspace the cartridge properly in a revolver, but it can also be used in other magazine types because it is a semi-rimmed cartridge.

Since the diameter of the rim is the same as that of the case, obviously we cannot use the rim for headspacing the cartridge in the chamber. So how does it work for these cartridges? The following images show us how this is done:

In the case of straight cartridge cases, the case mouth is not crimped onto the bullet, as is done with revolver cartridges. This leaves a little projection in the case mouth that can be used to headspace the cartridge in the chamber correctly: 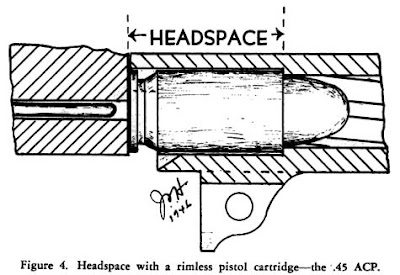 The above image shows a .45 ACP cartridge loaded into the chamber. Since the cartridge rim is the same diameter as the case body, this cartridge is headspaced against the throat of the cartridge.

Another way to do it is to shape the cartridge into a bottle-neck shape. For this type, the headspacing happens against the shoulder of the cartridge.

As you can see in the image above, the contact point at the shoulder of the cartridge ensures that the cartridge fits into the chamber at the proper depth.

As manufacturing technologies of cartridges improved in the late 1890s, it became possible to mass produce rimless cartridges that would headspace correctly. The rimless cartridge type quickly became the most popular type of cartridge and has remained so to the current day. Since it has no protrusions to complicate the feeding process, the rimless cartridge type has become well suited for most higher capacity modern magazine types, e.g. box magazines, drum magazines, ammunition belts etc. The easier feeding process also made it possible to produce modern rapid-firing weapons, such as machine guns, sub machine guns etc. Some early rimless cartridges include the 9x19 mm. Parabellum pistol cartridge (Luger cartridge), the .30-03 cartridge from 1903, followed by the .30-06 from 1906, the .45 ACP designed by John Browning in 1904 etc. All these cartridges are still widely used currently, along with more modern designs, such as the 7.62x51 mm. NATO / .308 Winchester and 5.56x45 mm. NATO / .223 Remington cartridges.

In our next post, we will study a couple more types of cartridge rims.