While an ammunition belt can hold and feed cartridges into a firearm, it does not fall into the category of "magazine", because it has no feeding mechanism of its own. Instead, an ammunition belt relies on a separate feed system built into the rifle, to pull the belt in, extract and then use the ammunition. Belts are generally used with firearms that have a high rate of fire (e.g.) machine guns. 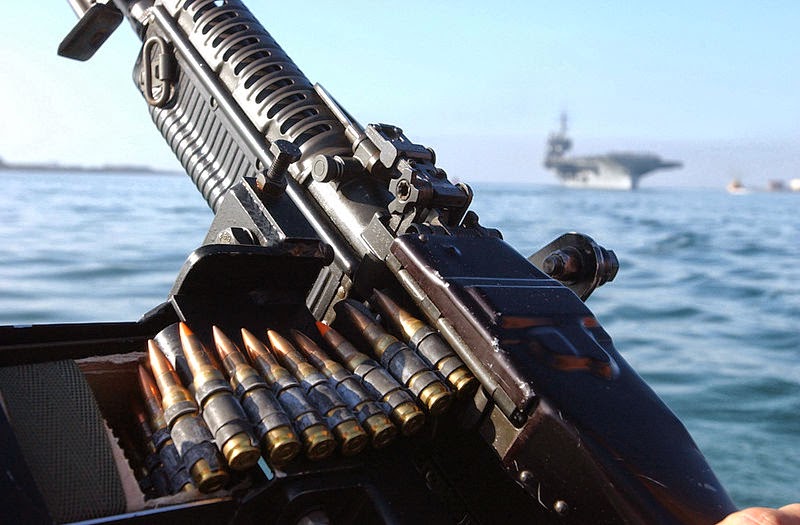 An M60 machine gun with an ammunition belt. Click on the image to enlarge. Public domain image.

Early ammunition belts were made of cloth, with evenly spaced pockets to place cartridges into. These were used in early machine guns, such as the Maxim gun, Vickers machine gun, Browning M1919 machine gun etc. The feed mechanisms on these early guns are designed to pull each cartridge from a belt backwards and then feed the cartridge forwards into the chamber. The empty belt is pushed out of the other side of the gun and it may be refilled again. The good thing about cloth belts is that they are easily reusable and can be quickly refilled. The problem with cloth belts is that they tend to be somewhat prone to jamming, especially because cloth tends to deteriorate if it absorbs water, oil, cleaning chemicals etc. Also, the empty side of the belt may get tangled up with vegetation and debris as it comes out of the gun. This is usually a problem, if the gunner wants to move the gun. 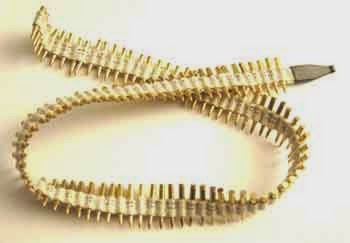 An ammunition belt made of cloth.

Because of the jamming issues, ammunition belts are now generally made of metal links. Metal links have the advantage that they are not affected so much by oil or cleaning solvents. However, they tend to be heavier than cloth belts.

Newer ammunition belts are made using disintegrating metal links. What this means is that each link is connected to the round ahead of it in the belt. As each cartridge is stripped out of the belt and loaded into the firearm chamber, this causes the link holding the cartridge to fall out of the belt and the link can be ejected out of the bottom of the gun. This means that there is no empty belt coming out of the other side of the gun and it can't tangle up with anything. Therefore, the operator can move the gun without worrying about a half-empty belt dragging on the ground. On the other hand, disintegrating belts are not as easy to reload as non-disintegrating types.


The above video shows a user using a belt with disintegrating links. As you can see, the links holding the ammunition fall out of the gun as each cartridge is fired and there is no empty belt coming out of the side.

Belts allow the user to carry a lot of ammunition and are relatively lightweight. This is why they are used on firearms with high rate of fire (e.g.) machine guns. Many machine guns have a box on the side, where a folded belt may be placed. The picture of the M60 above shows one such ammunition box. This allows the user or an assistant to conveniently carry ammunition around and also provides the belt some protection from rain, snow, mud etc.