In today's post, we will study a type of magazine that has been used on only a few firearm models so far. Today's subject of study will be the horizontal magazine.

One of the well known weapons to use the horizontal magazine is the Fabrique Nationale FN P90 personal defence weapon.

The transparent piece lying flat at the top of the weapon is the horizontal magazine. In the above image, the cartridges emerge out of the magazine on the right side. The picture below shows what the magazine looks like, when it is detached from the firearm: 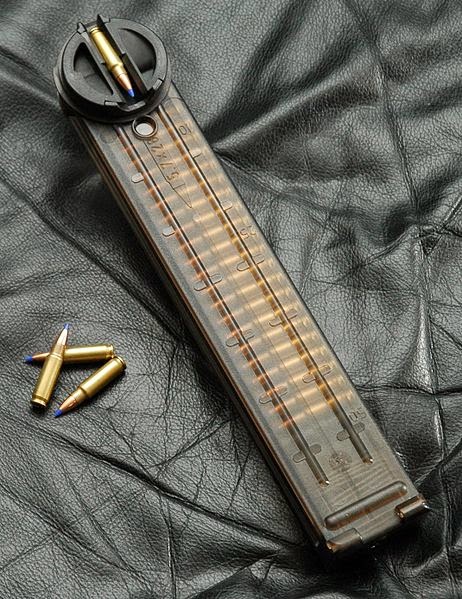 A horizontal magazine. Click on the image to enlarge.
Image released under a Creative Commons Attribution-Share Alike 3.0 Unported license by ROG5728 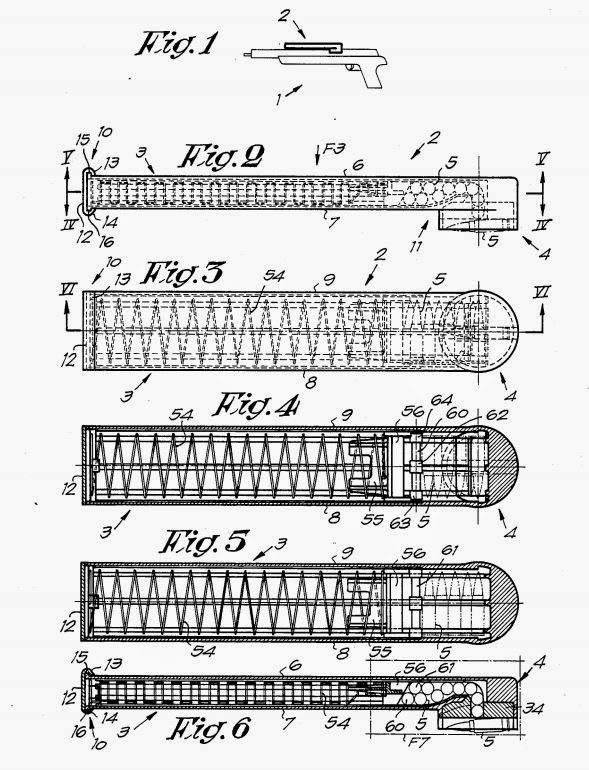 Public domain image of the FN P90 magazine patent. Click on the image to enlarge.

The above image shows some of the details of the magazine, taken from one of the pages of the patent claim. This particular magazine design was invented by Rene Predazzer and the full details of the patent claim may be found here. Figure 6 in the image above shows how the double rows of cartridges are combined into a single row by the ramp and rotated before exiting the feed lips.

However, the FN P90 is not the first user of a horizontal magazine. There exists an US patent claim from 1923 by Arthur Kottas, a retired officer of the Austrian Army, where a horizontal magazine is described (in fact, his US patent claim mentions that he first patented his invention in Austria on August 16th, 1918, so the actual invention date is even earlier). The details of his patent may be found here: 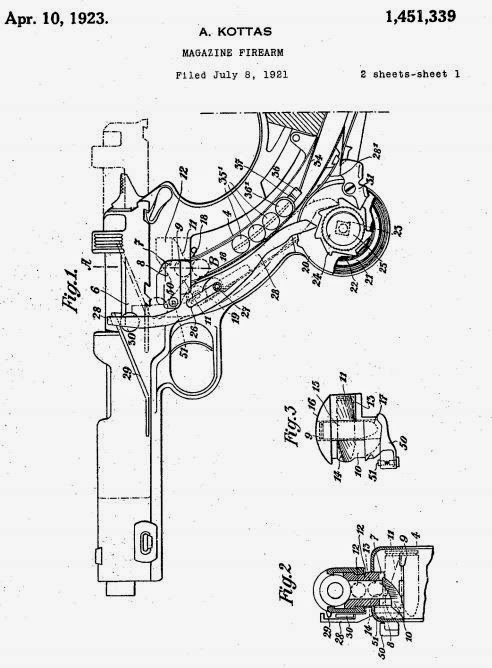 Public domain image of Arthur Kottas' magazine design from 1923. Click on the image to enlarge.

In the Kottas patent, a single row of cartridges is placed at right angles to the barrel and rotated into position before entering the chamber. 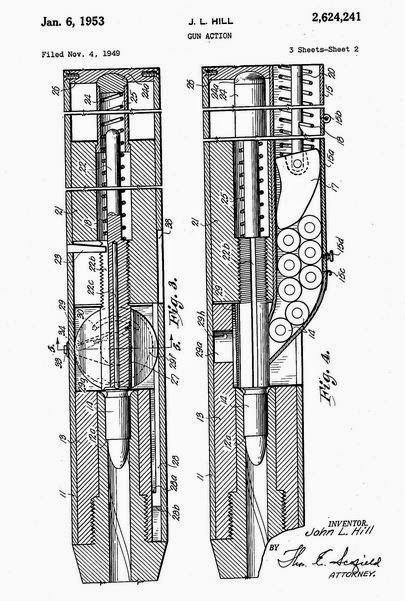 Public domain image of John L. Hill's patent from 1953. Click on the image to enlarge.

In both the Conway and Hill patents, note that the magazines contain double stack of cartridges which are combined into a single stack and then rotated before exiting the chamber. The same double stack idea is used in the FN P90 magazine as well, except that the magazine is placed at the top of the firearm instead of underneath it.

The nice thing about horizontal magazines is that they can contain a large number of cartridges for their size. For instance, the FN P90 magazine can hold 50 cartridges, which is pretty amazing considering the size of the firearm. Also, compared to a box magazine which projects out of a weapon, this type of magazine sits horizontally and flat inline, which makes the firearm much more balanced and convenient to hold. Since the magazine stores cartridges side by side, it can safely be used with centerfire cartridges using spitzer-type bullets. In the case of the FN P90, the magazine is made of a semi-transparent plastic, which allows the user to see how many cartridges are left in the magazine.