In our last post, we studied chain guns from the 19th century. In today's post, we will study modern chain guns.

When we look at firearms throughout history, repeating firearms have been based on two different feed mechanisms:

Since the latter part of the 20th century, we can add a third category for repeating firearms: using an externally powered source to drive the feed mechanism. In this category, we have modern chain guns. A chain gun uses an electric motor and a continuous chain to drive the feed and firing mechanisms. The chain is similar to that used in bicycles and motorcycles. Unlike weapons in the second category, a faulty cartridge will not stop the weapon from operating, since the mechanism is driven by external forces and the faulty cartridge will be merely ejected out.

It might be interesting to note that while there are quite a few chain driven guns made by different companies, the words "Chain Gun" are actually a registered trademark owned by Alliant Techsystems Inc.

Hughes EX-34 Chain gun. Click on the image to enlarge.

The above image shows a Hughes EX-34 chain gun and guns based on its operating system are found on helicopters, tanks, armored fighting vehicles etc. 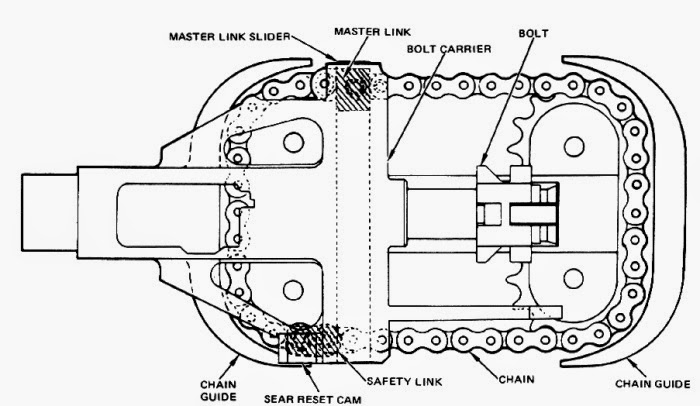 Schematic of the Hughes chain drive system. Click on the image to enlarge.

The above image is from a patent document that shows the mechanism for the Hughes chain driven gun. The chain is powered by an electric motor that runs on 24 to 28 volts. The chain operates the ammunition belt feed, as well as powering the extraction mechanism and the firing mechanism. 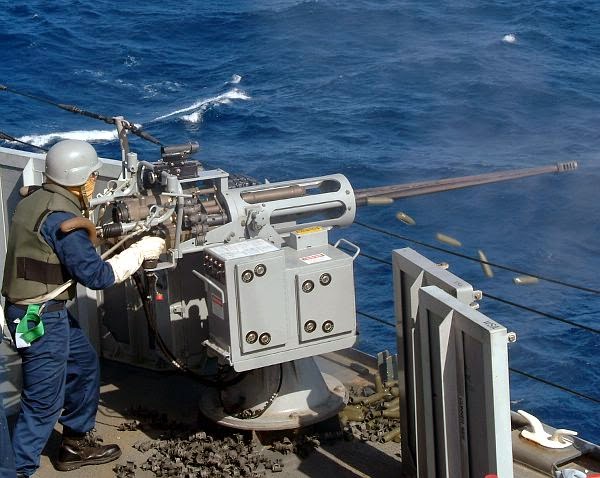 The above picture shows the MK 38 machine gun system, which is used on US Navy ships since 1986. It has a range of 2700 meters, fires 25 mm. (1 inch) shells and is used as a defensive weapon to counter fast moving surface targets.

Chain driven mechanisms are generally used for larger caliber guns and auto-cannons and have a correspondingly bigger recoil than hand held firearms. Therefore, most chain guns are usually mounted on a vehicle, such as a ship, helicopter, tank etc.