In our last post, we looked at horizontal magazines. In today's post, we will look at a type of magazine that was used in the 19th century: the turret magazine.

During the middle of the 19th century, Samuel Colt perfected the revolver and obtained patents for revolver cylinders. Hence, anyone who attempted to make a revolver type firearm during that period, was likely to infringe on his patents and would have been forced by law to not manufacture such weapons. Turret magazines were seen as one way to bypass Colt's patents.

A Daniels Turret Rifle. Click on the image to enlarge 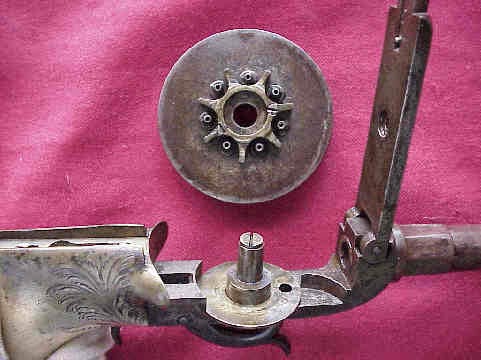 A Cochran revolver shown with turret magazine loaded and unloaded. Click on the images to enlarge

In the above pictures, we see some firearms with horizontal turret magazines. As the reader may note, the magazine is horizontally positioned on the firearm. Percussion caps are placed on the nipples at the underside of the turret magazine, to ignite the gunpowder loaded into the chambers. Note that in the above examples, the hammer of the firearm is placed under the firearm and in front of the trigger and the magazine is accessed from the top. The pictures of the Cochran revolver, in particular, show how the magazine is loaded and unloaded from the top of the firearm. John Webster Cochran of New York, received about 25 different firearm patents and was well known for his "recoil-free" turret weapons. Many of his turret designs were manufactured under license by the company of C.B. Allen of Springfield, Mass.

There is also the vertical turret magazine and in this category, we have:

Porter turret rifle with spare magazine. Click on the image to enlarge. 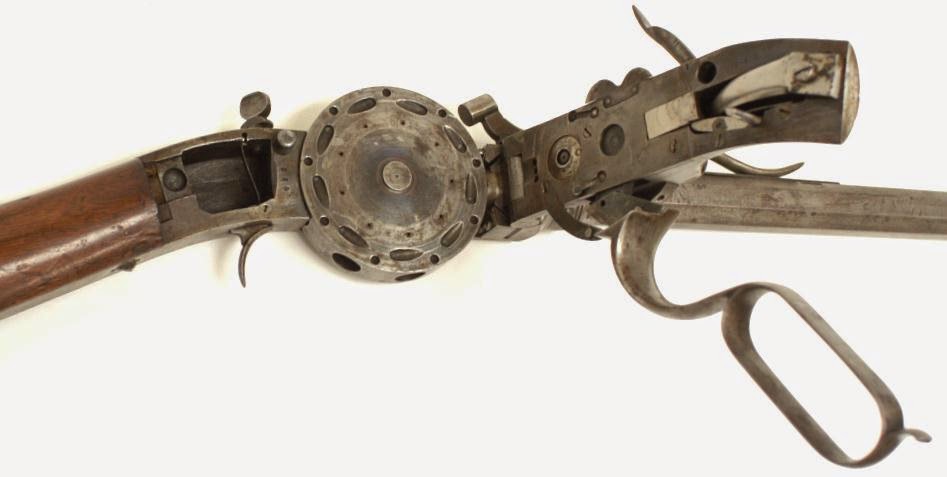 Porter turret rifle, showing how the magazine is loaded. Click on the image to enlarge. 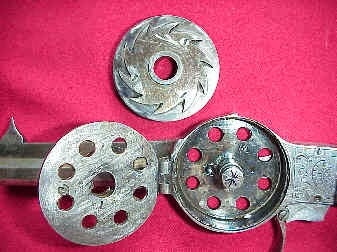 A French made Goudry turret revolver, open and closed. Click on the images to enlarge.

Porter turret rifles were invented by T.P. Porter and were seen as competitors to Colt's revolving rifles. They were used by many pioneer settlers moving towards the Western United States. Turret magazines hold about 9-20 cartridges, which is pretty high capacity for the period that they were used.

Both horizontal and vertical turret weapons are somewhat dangerous, because a loaded weapon will always have at least one of its cartridges pointing directly back at its user. After firing a cartridge, there is the danger of stray sparks flying into other chambers and a chain fire discharging the other chambers as well. This actually happened on some occasions and resulted in fatal accidents. Samuel Colt, being a crafty businessman, took full advantage of this news and advertised that his revolving system was much superior and reliable compared to any turret firearms. In fact, Colt even falsely spread a rumor that the inventor of the Porter rifle (T.P. Porter) was killed when demonstrating his own rifle to customers! These news items and rumors had the effect of halting sales of Porter rifles and turret magazines in general and Mr. Porter spent the rest of his life making more traditional firearms.