In our last post, we looked at a series of penetration tests done in Graz, Austria, to weapons from the 16th, 17th and 18th centuries, compared to modern weapons. But what about accuracy, the reader asks? Today, we will study the accuracy of those ancient weapons against modern weapons. 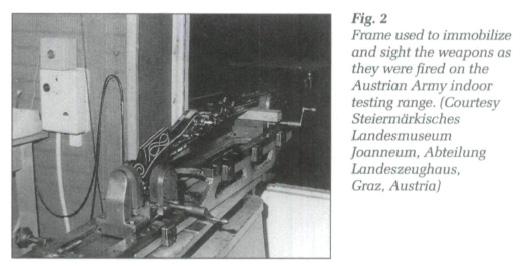 As was mentioned in the earlier posts in this series, the firearms were typical mass-produced weapons used by infantrymen in the past. The testers also picked two modern rifles and a modern pistol to test against. For testing the accuracy, the firearms were all mounted on a frame and sighted to a paper target at 100 meters (330 feet) distance for rifles, and 30 meters (100 feet) distance for pistols. The paper target measured 167 x 30 cm. (or 5.5 x 1.0 feet), simulating the frontal area of a standing enemy, with an even larger secondary paper target behind it, to track where the bullets were hitting (even if they hit outside the primary target). The actual number of shots fired per weapon varied, but there were about 18 shots fired from each. The table below presents the results:

Results of accuracy tests. Click on the image to enlarge.

As before, a few notes on the results:


As can be seen from the above figures, long-barreled weapons performed very poorly in the accuracy tests. Only one musket (The 9th weapon - flintlock musket from Austria, made in the second half of the 18th century) showed any good probability of hitting the target (83%). Not surprisingly, this happened to be a rifled barrel. However, two other rifled weapons (the 1st one and the 6th one) performed really badly. In fact, the 6th weapon (the wheellock musket, South German, from the first half of the 17th century) scattered its shots so badly that the test was cancelled for it. For 4 out of the 13 guns tested, the enclosing rectangle's area was larger than the area of the primary target, and for 2 others, it was nearly the area of the primary target. This means that a total of 6 of the 13 long guns shot so inaccurately at 100 meter distances, that they only hit their targets by pure random luck! This is why battlefield commanders of the 16th-18th centuries ordered their troops to shoot at smaller distances, such as 50-70 meters (160 to 230 feet) or even closer than that, in order to be effective. One of the primary reasons for inaccuracy of the ancient firearms is the shape of the bullet, which is a round ball. At distances of 100 meters, the Magnus effect, which we studied earlier, plays a significant role in the ball deviating away from the target. By contrast, modern bullets are tapered and are more stable when flying in the air.

On the other hand, the two ancient pistols fared much better at 30 meter ranges. While they had much larger enclosing areas than the modern pistol, they did manage to put most of their shots into the human-sized target. In fact, one of the two ancient pistols had a 99% probability of hitting its target. Therefore, at closer distances that pistols were used at, they could be pretty deadly. At closer distances, the deviation caused by the Magnus effect is not large enough to cause the ball to miss its target. This explains the number of injuries and deaths in pistol duels, as well as the effectiveness of pistol cavalry units, such as the German Reiters troops.