The History of Saltpeter - XIX 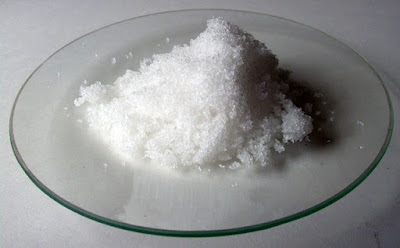 A sample of Chile Saltpeter. Click on the image to enlarge. Public domain image.

Unlike the saltpeter we've been studying so far, which is potassium nitrate, chile saltpeter is sodium nitrate. It occurs naturally in the Atacama desert, which lies between Peru and Chile. The first shipment of Chile saltpeter to Europe arrived in England in 1820 or 1825, but they could not find any buyers and therefore dumped it at sea, so that they didn't have to pay a customs toll. However, by the time of the Crimean war (1854-1855), the demand for saltpeter was so much that the existing sources from Europe and India couldn't keep up and it became profitable to ship South American saltpeter to Europe. There is a good reason why this stuff was called "white gold".

There are a few theories about how the saltpeter forms there. The classic explanation is that in the Tarapaca region in the Atacama desert, which is a dry desert that experiences a little rainfall every six or seven years, when the rain falls, it floods the plain. However, the plain slopes gently towards the coast hills and as there is no outlet for the water, it collects there and evaporates in the desert's arid conditions, and all the nitrate that was dissolved from the entire plain is deposited in a relatively narrow area. A more modern theory states that the Andes climate was warmer and wetter about 20 million years ago and nitrates, iodine and chromium deposits were leached from the ground water. About 10 million years ago, as the Andes and the coast mountains began to grow higher and higher, the climate shifted to desert and forced the groundwater to evaporate, leaving behind the nitrates. Sea spray and fog from the ocean also drop small amounts of nitrates on the surface.

Originally, the areas where most of the deposits were concentrated belonged to Peru and Bolvia: specifically Peru's Tarapaca region and Bolivia's coastal region of Antofagasta. Mining concessions were granted to Chilean and the British companies to mine these areas. Then the Peruvians and the Bolivians attempted to control the British and Chilean companies by imposing new taxes on them. This led to the War of the Pacific (1879-1883) which ended with Chile capturing both the Tarapaca and Antofagasta regions. By the 1890s, Chile was supplying a whole lot of Chile saltpeter to the world.

Sodium nitrate can be converted to potassium nitrate by interacting with the chloride of potassium, which could be made from kelp, wood ash, or later, from carnallite, which is a mineral that occurs in huge deposits in Europe and America, particularly in Carlsbad, New Mexico, Paradox Basin in Colorado and Utah, Stassfurt in Germany and the Perm Basin in Russia.

During the First World War, demand for Chilean nitrate exports skyrocketed. Before 1914, only one-fifth of Chilean nitrates were used for explosives, but after the war started, almost four-fifth of all nitrate exports were used for military purposes. Before the war, Germany was the largest market for Chilean saltpeter. For example, in 1912, Germany imported 37.9 % of all Chile saltpeter exports, England had 5.7% and the rest of Europe had 31.6%, which means that Germany alone imported more than all of Europe combined! The United States imported about 23.6% of Chile saltpeter exports during the same year. At the beginning of World War I, German Admiral Maximilian Reichsgraf von Spee commanded a fleet of ships off the coast of Chile in an attempt to disrupt Chile saltpeter supplies to everyone else. After the German fleet was destroyed in the Battle of the Falkland Islands, the exports to Britain resumed. Germany was blockaded from accessing Chilean saltpeter from 1915 onwards, leading to the United States and the UK becoming the largest markets for Chilean saltpeter. Because of this, Germany was forced to discover a method to produce synthetic nitrates. The first breakthrough came from Fritz Haber, who discovered a way to produce ammonia from nitrogen and hydrogen in the air and water (neither of which could be blockaded by the allies). Then Wilhelm Ostwald discovered a method to convert ammonia to nitric acid and from then on, Germany's military industry was free from its dependency on Chilean saltpeter. In fact, if it weren't for these two discoveries, the shortage of munitions would have forced Germany to end the war by 1915, instead of prolonging it till 1918.

Ultimately though, the German innovations forced the decline of the Chilean saltpeter mining industry, as more and more countries began to produce synthetic nitrates using the techniques that they pioneered. At one time, Chile saltpeter accounted for 50% of Chile's Gross National Product, but by the time the 1940s rolled around, it had fallen to practically 0. Of the 170 or so "nitrate towns" that were formed in the Atacama desert to mine for nitrates, only one of them remains open today, the town of Maria Elena.