In our last post, we studied the invention of compressed black powder by General Thomas Rodman of the US Army. While this idea had sound theoretical fundamentals and also could be demonstrated successfully in trials, there were some practical difficulties encountered when manufacturing this powder in bulk and deploying the compressed powder cakes in the field. The main issues were that it was hard to press such large, heavy cakes of powder in the presses of the time and the large perforated cakes of powder also had structural integrity problems and tended to break up into smaller grains during transport, or while being handled in a battlefield.

A solution to this problem was proposed by another American, Professor Robert Ogden Doremus, a professor of chemistry, and a co-founder of New York Medical College. 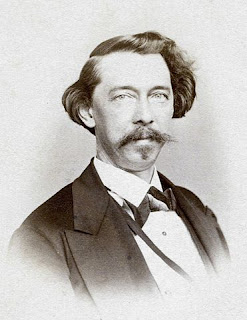 Doremus' idea was that instead of pressing together a large cake of powder equal to the bore of the cannon, he suggested manufacturing them into hexagonal prisms of a smaller size, with comparatively smaller holes running through them. This powder was called prismatic powder.

The number of holes in each prism could be less in number (usually between 1 and 7) and these could be stacked together to form a rigid cartridge, much less liable to break up during manufacturing and transport. Due to their smaller sizes, it was easier to manufacture a number of smaller hexagonal cakes, rather than one large cake weighing several pounds in weight.

Another idea also due to Professor Doremus was to make different sections of a cartridge with different densities of powder, whereby the density would affect the rate of combustion and maintain a higher average pressure. The idea was to pack the first part of the cartridge under high pressure, then make two more layers on the same cartridge under lower pressures.

During the Civil War, a Russian military commission visited the United States and were greatly impressed by the results shown by Doremus' prismatic powder and undertook to develop and use prismatic powder in their large guns as well. Doremus also visited Paris and impressed the French with his new powder and was authorized by the French ministry of war to modify the machinery at a French powder factory to produce his prismatic powder. In fact, a large portion of the Frejus Rail Tunnel between France and Italy was blasted away with "la poudre comprimée". Pretty soon, many European countries (Italy, Germany, France, UK etc.) started to manufacture prismatic powder as well. 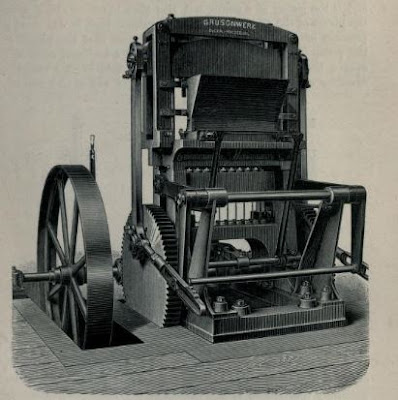 A cam-press for making prismatic powder.
This press was built by the Grunsonwerk of Buckau, Germany.
Click on the image to enlarge. Public domain image. 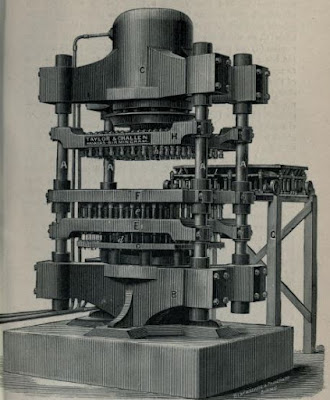 A hydraulic press for making prismatic powder.
This press was manufactured by Taylor and Challen of Birmingham for the Royal Gunpowder Factory, Waltham Abbey, England
Click on the image to enlarge. Public domain image,


To make this powder, granulated powder containing about 4% moisture was put into the hopper of the press. The more moist the powder, the easier it is to press it into shape, but the powder can't be too moist, otherwise the saltpeter will migrate to the powder's surface while drying. The powder was filled into several molds, the height of which was adjusted depending on the moisture content of the powder and the moisture content in the air that day. Then, the press was activated and pressure was applied to the powder in the molds, to form prisms of the required shape and size. The sizes and densities of the prisms varied by country. For instance, in England, the prisms were about 1.5 inches high and had a desnity of 1.78, whereas in Germany, the prisms were about 1 inch high and 1.575 inches over the angles, with the weight being about 1.41 ounces and density of 1.66. Hydraulic presses were generally used in England, Germany and France towards the latter part of the nineteenth century, but cam-presses were still in use in some parts.

After pressing, the prisms were dried in special drying-houses using trays. The trays were made of narrow wooden strips, with enough gaps between them to let air pass through, but not big enough to let the powder fall through. At Waltham Abbey, the drying process was done slowly for 140 hours and the dried powder contained less than 1% moisture. At Spandau, Germany, they would dry the powder at a faster rate by using air at a temperature of 122 °F for about 48 hours, after which the powder would contain less than 0.75% moisture.

In our next post, we will look into another type of powder called "pebble powder", which was manufactured in the 19th century.