In our last post, we looked at the Cookson Repeater. In today's post, we will look at another repeating rifle, but this one has a number of very unusual features of interest. Today's study will be about the Girandoni Repeating Air Rifle.

The Girandoni Air Rifle was developed by an Italian gunsmith and watchmaker named Bartholomaus Girandoni around 1778 or 1779 in the Tyrol region of Italy. In 1780, it was adopted for use in the Austrian army, where it was called a Windbuchse (literally meaning "wind rifle" in German). The rifle was in use by the Austrian military until around 1815 and was used against in battles against the Turks. Japan and France were also other users of this type of weapon.

An unusual feature of the Girandoni rifle was that it did not use any gunpowder. Instead, the method of propulsion was compressed air. The rifle was about 4 feet (1.2 meters) long, weighed about 10 lbs (4.5 kg.) and fired a .46 caliber ball at velocities of around 750-900 feet/sec (about 225 - 275 meters/sec), which is about the same velocity as a .45 ACP bullet coming out of a modern Colt 1911 pistol. Although, air rifles had been in existence before Bartholomaus Girandoni invented his rifle, previous models were all single shot rifles, whereas this was the first example of a repeating air rifle.

It looks similar to other flintlock muzzle loaders of that era, but there are some interesting differences. For instance, there is a tubular magazine on the side, where the user can load about 20 spherical bullets. In fact, this was one of the first firearms in history to feature a tubular magazine. There is no flint, frizzen or firing pan, since this weapon doesn't use gunpowder. The stock is a hollow air reservoir made of iron, that is covered in leather and screws on to the back of the rifle

A leather gasket is placed between the rifle and the air reservoir, to maintain a tight seal. In the field, the leather gasket often needed to be wetted to make sure that the seal was good. There is a thumb slide lever on the left side of the rifle that is pushed to load this weapon.

When this rifle was adopted by the Austrian army, each soldier was equipped with three air reservoirs (one attached to the rifle and two spares carried in a leather bag), 100 lead bullets in tubes, spare leather gaskets and an air pump to refill the reservoirs. In addition, each soldier also had a cleaning kit and a bullet mold to cast extra bullets. 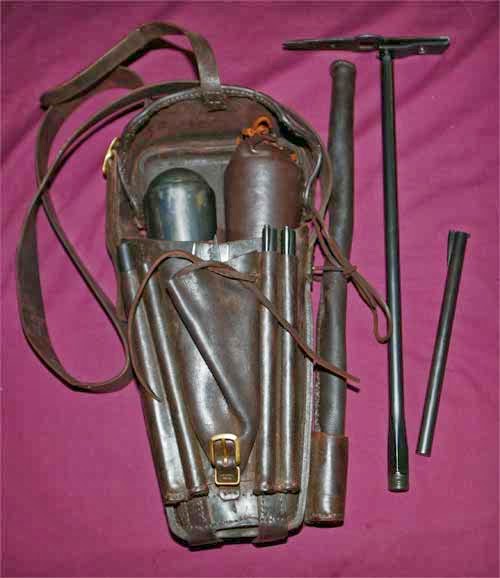 
To use this rifle, the soldier would point the rifle's muzzle to the sky and push the thumb slide button on the left side of the rifle to open the breech block. Due to gravity, a bullet from the tubular magazine would fall into the breech. The soldier would then cock the rifle and the rifle was ready to fire. One of the nice things about this rifle was that the soldier could load it from behind cover, in a prone position. The soldier would fire his rifle, then roll on his back, point the rifle to the sky and push the lever, then roll back on his stomach and cock the rifle and be ready to fire again. All this would only take a couple of seconds and this was a huge advantage over other muzzle loaders of the era.

Since the rifle uses no gunpowder, it does not produce much noise, which makes it good for ambushes. There is no smoke produced either. The user also doesn't need to worry about keeping gunpowder dry in rainy weather. However, the weapon has some disadvantages as well. When the weapon was first manufactured, production technology was not as good as it is today and the screw threads around the neck of the reservoir were rather weak. The leather gaskets needed to be constantly kept wet to avoid air leaks. The reservoirs were also not very sturdy and often broke in the field, rendering the weapon useless as a rifle. The reservoirs were also difficult to make with the manufacturing technology available during that time. Filling the reservoirs by hand took about 1500 strokes of the hand-pump to fill each one and this took some time. The Austrian army attempted to fix this by providing larger, more efficient pumps mounted on wagons, but this meant the wagons needed to follow the soldiers around the battle field, thereby limiting their mobility. These are some of the reasons why the Austrian army stopped using it in 1815.

However, this type of rifle has a very important place in American history. A version of the Girandoni air rifle was made in Philadelphia by one Isiah Lukens, who was also a watchmaker and gunsmith like Bartholomaus Girandoni. The Lukens version of the rifle had a capacity of 23 bullets, instead of 20 bullets that the original rifle had. One of these rifles was custom-made by Isiah Lukens for Meriweather Lewis, who carried it with him on the famous Lewis and Clark expedition from 1804 to 1806 (for non-American readers, the Lewis and Clark expedition was a famous scientific and exploration expedition that discovered a land route from the city of St. Louis, Missouri to the west coast of the United States.) Meriweather Lewis is recorded to have used this rifle to impress several Native American tribes, who were all amazed by its repeating capability and the fact that it made less noise than a conventional firearm.

The video below shows the curator of the NRA museum explaining the features and operation of this rifle:


The Girandoni rifle had quite a few innovations. It was one of the first rifles to feature a tubular magazine, well before the Spencer rifle and the Henry repeating rifles, which  were invented around 80 years later. It was the first repeating rifle in the world, that was used in military service. The mechanism it used was also quite advanced for its time. An air rifle even finds mention in the Sherlock Holmes mystery, The Adventure of the Empty House, where Colonel Moran attempts to assassinate Sherlock Holmes, using an unique air rifle made by a blind German mechanic named Von Herder.