In our last post, we studied how a bloomery was historically used to produce wrought iron from the raw iron ore. The problem with bloomeries is that they weren't very efficient when it came to extracting the iron metal from the ore (typically, a run would yield only 20% of the iron from the ore). Also, a bloomery can only process a small quantity of ore each time, so producing a lot of iron in a bloomery takes a long time. A more efficient process of extracting ore was developed using a blast furnace and used to produce an alloy of iron called pig iron. We will study that in this post.

The use of blast furnaces first started in China around 400 BC or so. The technology spread to the West and the Roman empire was definitely aware of it. However, with the collapse of the Roman empire, the technologies were forgotten in Europe during the Dark ages and were only rediscovered around the late middle ages (1325-1500 AD).

In a blast furnace, the fuel (initially charcoal and later coke), iron ore and limestone flux are poured on top and air is continuously supplied from the bottom, usually with mechanically powered bellows. Unlike a bloomery, the heat generated in a blast furnace is hot enough to melt the iron. The burning charcoal produces carbon monoxide, which rises up in the furnace, heats up the iron ore and removes the oxide from the ore to form carbon dioxide. The heat produced melts the iron, which drips down to the bottom of the furnace. Other impurities in the ore combine with the hot limestone, which forms a slag that also drips to the bottom of the blast furnace.

Since the slag is lighter than the molten iron, it tends to float on top and can be separated out. As the molten iron drops down through the charcoal (or coke), it absorbs some of the carbon in it. The resulting alloy is iron combined with a high percentage of carbon (greater than 4% or so). As we noted earlier, when we studied steel, adding carbon to pure iron makes it harder, but adding too much carbon makes it brittle.

The molten iron alloy is tapped off from the bottom of the furnace and poured into sand molds. Traditionally, the mold was shaped as a long central channel line, to which were branched several smaller depressions at right angles to the central channel. The molten metal would flow into down the central channel into the smaller branches and cool down to form ingots. To the more poetic minded, the configuration looked like a bunch of piglets suckling milk from their mother. This is why this type of iron alloy is called "pig iron".

Once the mold has cooled down, the ingots can be easily broken off the central channel, since the alloy contains so much carbon that it becomes brittle enough to be broken by a few blows from a hammer. 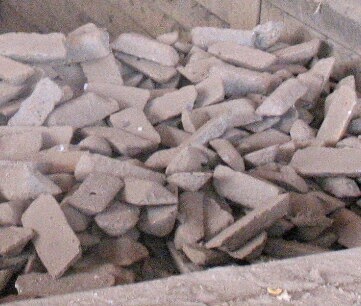 Blast furnaces are much more efficient than bloomeries and can extract much more iron from raw ore. Unlike a bloomery which works with small batches of ore, a blast furnace can be used continuously, because more ore, fuel and flux can be added from the top as needed. The only problem is that the pig iron produced by this method contains so much carbon (and some sand impurities) that it is not of much use by itself. The pig iron is so hard and brittle that it cannot be easily shaped and will easily break if struck with a hammer. It also melts at a lower temperature than iron or steel. So what use is it for gun-making, the reader wonders. Well, this pig iron can be put into a finery forge or a puddling furnace and further processed in one of three options.


Blast furnaces got so large that the supply of charcoal could not keep up with the demand. Entire forests were cut down to convert wood to charcoal and then people had to pay extra to haul wood from locations far away from the factories. Some factories even failed because they could not get enough hardwood from local sources any more. In England, Abraham Darby started to switch his furnace to use coked bituminous coal instead of charcoal in 1709. Since coal does not involve labor for cutting trees down and converting the wood to charcoal, the price of pig iron produced using coal became cheaper than that produced using charcoal. Additionally, it became possible to build larger furnaces using coking coal. The availability of cheap iron in England was one of the key factors responsible for the start of the modern Industrial revolution!

In the next couple of posts, we will study how pig iron is converted to cast iron or wrought iron.