In our last post, we saw how a puddling furnace could be used to convert pig iron/cast iron into wrought iron, which is much more suitable for manufacturing firearm parts. Today, we will study some early attempts to convert this wrought iron to steel. Earlier, we alluded to how carbon is one of the important elements that alloys with iron to alter its properties. It might be well to go over how the percentage of carbon content creates different grades of iron alloy, before we go any further.

Wrought iron is an iron alloy that contains very low carbon content (0.02% - 0.08%). Steel is an alloy of iron that has around 0.2% - 2.1% of carbon in it. Other elements such as nickel, chromium, molybdenum etc. may also be added to steel to alter its properties further, but carbon is the main alloying element. If the iron alloy has more carbon content (about 2.1% - 4.0%), then it is called cast iron and if it is above 4%, it is called pig iron. As the percentage of carbon content increases, the hardness of the iron alloy increases as well, but it also becomes brittle (i.e. it will break if subjected to a sudden hard blow). The increase in carbon content also makes the alloys less weldable and shapeable. Therefore, cast iron and pig iron have to be cast in molds, rather than hammer forged over an anvil.

Since wrought iron has very low carbon content, it is very malleable and weldable and therefore, it was used for forging gun parts since the early days of firearms. However, it is also relatively soft, therefore it wears down easier than other iron alloys.

Pig iron, which has very high carbon content, is very hard, so it cannot be welded or shaped other than by casting, and it shatters easily, which means it is useless for use in firearms. On the other hand, it is very cheap to mass-produce pig iron from iron ore and this pig iron can be converted to other more useful iron alloys, as we saw previously.

Cast iron also cannot be welded, but it can be cast into shapes like pig iron. Like pig iron, it has a tendency to shatter, but this can be compensated by making the parts thicker (which is how several cannon and naval guns were made). This increases the weight of the gun, but since cast iron is cheap to produce, the cost savings made it worth using for larger guns. Since cast iron has a tendency to shatter, explosive artillery shells and grenades were made of cast iron for this reason as well.

Steel has carbon content in between wrought iron and cast iron, therefore it has some useful properties common to the other two alloys. Like wrought iron, steel can be welded and forged into shapes. However, the higher carbon content of steel means it can be hardened much more than wrought iron and therefore lasts longer. On the other hand, the carbon content of steel is not high enough to make it brittle like cast iron. Therefore, the flexibility and tensile strength of steel, combined with its hardness, make it much more useful for firearms than either wrought iron or cast iron. Steel was known for centuries, but the process of making steel was more difficult and expensive to manufacture, until the mid 1850s or so. Ancient India was famous for the superb quality of Wootz steel (otherwise known in the west as Damascus steel), but the techniques of production were not well known elsewhere and also not mass produced enough to be adopted in large scale. The tricky part to manufacturing steel was how to manage the carbon content properly. Too little carbon and the steel would be too soft and too much carbon and the steel would become cast iron and therefore brittle.

Remember that in the previous posts, we saw how carbon was removed from pig iron and cast iron, to form wrought iron (which has very low carbon content). This was done using finery forges and later, puddling forges. It was noticed however, that this process could also be used to produce steel, by not removing all the carbon content in the pig iron. According to The Ordnance Manual for the Use of the Officers of the United States Army from 1862 (page 418), we have the following observation:

"If, in the operation of puddling, the process be stopped at a particular time, determined by indications given by the metal to an experienced eye, an iron is obtained of greater hardness and strength than ordinary iron, to which the name semi-steel, or puddled steel, has been applied. The principal difficulty in its manufacture is that of obtaining uniformity in the product, homogeneity and solidity throughout the entire mass. It is much improved by reheating and hammering under a heavy hammer.

A tenacity of 118,000 lbs to the square inch has been obtained from semi-steel made in this country in this way. Field-pieces have been made of this material, and it is believed that it will answer well for this purpose."

This means that the metal is pulled out of the puddling furnace, before the process of removing all the carbon is complete. Of course, this means the process requires a highly skilled and experienced worker to decide exactly when to pull out the metal from the furnace. Also, different workers could have different ideas about when the metal should be removed and therefore, the quality of steel produced by this method would vary a lot.

Another better method that was used before the industrial revolution was the "cementation process". The idea is that after wrought iron is produced (by removing all the carbon content from pig iron), a little bit of carbon is added back to the wrought iron in a controlled manner, to make steel.

The process was originally described in a treatise published in Prague in 1574, but was reinvented by Johann Nussbaum of Magdeburg in 1601. It made its way to England in 1614. 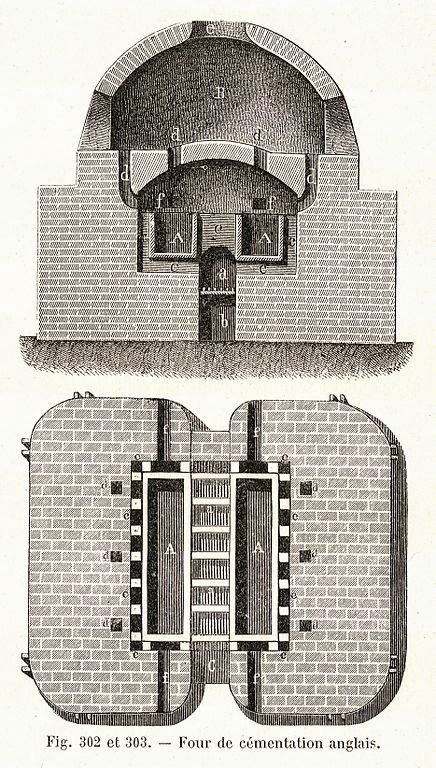 A cementation furnace. Click on the image to enlarge. Public domain image.

Wrought iron bars and charcoal are packed in several alternating layers in a closed furnace and exposed to heat of about 1500 degrees fahrenheit (815 degrees centigrade) for 7 to 8 days and then the bars are examined to make sure that the correct conditions are reached and then the heat is removed and the furnace is allowed to cool for two weeks or more. The carbon in the charcoal gets absorbed into the iron bars, making steel. The gases produced during this process leave bluish gray bubble marks (blisters) on the steel's surface, therefore the product was called "blister steel".

The problem with producing blister steel with this method is that the carbon tends to be absorbed in a non-uniform manner and there is usually more carbon on the outside of each bar. Therefore, if someone makes multiple pieces from the same bar of steel, some of the pieces could be harder than the others, even if all the pieces are forged and heat treated identically! To work around this problem, the blister steel would be sheared into smaller strips of steel and then the strips would be stacked together in a pile, heated and forge welded back to each other, to even out the carbon content throughout the steel. The result was called "shear steel". For even better product, the process would be repeated (i.e.) shear steel bars would be sheared once again, stacked together, heated and welded together again to produce "double shear steel", "triple shear steel" and so on.

The quality of blister steel also depends on the quality of the wrought iron bars used in the process. It was discovered that the best wrought iron bars for making steel came from Russia and Sweden (the famous "Oregrounds Iron" that we talked about earlier). This is one of the reasons why British and Dutch merchants bought up the entire output of some Swedish iron factories many years in advance.

For your viewing pleasure, here are a couple of videos showing blister and shear steel being produced.

Of course, the problem of distributing the carbon evenly in the steel was not entirely solved by shear steel. In our next post, we will study more major advancements in steel making technologies and how the town of Sheffield became a major center of steel manufacturing.