A couple of posts ago, we studied about the blast forge and how it is used to produce pig iron. While blast forges are much more efficient at extracting iron from ore than bloomeries, they have the side effect of adding excess carbon to the iron, along with other impurities. The result is an iron alloy called "pig iron", which is rather brittle and has a lower melting point than pure iron, which makes it useless for firearms. However, this pig iron alloy can be converted into a much more purer iron alloy called "wrought iron", which we studied earlier when we studied bloomeries. Wrought iron contains a lot less carbon than pig iron and is therefore much more malleable, can be shaped and also welded easily. It is more efficient to use a blast forge to produce pig iron from the ore and then refine the pig iron into wrought iron than it is to produce wrought iron directly from the iron ore in a bloomery. We will study how that was done in today's post.

The first technique to refine pig iron or cast iron was invented in China around 500 BC and involved using a finery forge. Like cast iron, the technique of refining it didn't reach Western Europe until the 15th century or so. In the area of Wallonia (now part of Belgium), the process was improved and spread to some other parts of Europe. Most of Sweden used a type of finery forge called the German forge for the process, but the area in Uppland, north of Stockholm, used the Walloon process, as did most of England. Another type of forge that was used in England and South Wales, also was popularized in Sweden as the Lancashire forge. We will study them in this post. 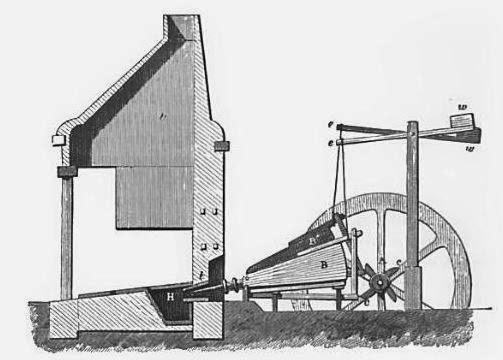 A German Forge. Click on the image to enlarge. Public domain image.

In the above figure, H is the hearth in which the operation is carried out. It is line with thick cast iron plates and is about 12 inches deep and width about 24 to 26 inches. Air is blown in through a nozzle called a "tuyer", which is labelled 't' and projects about four inches into the hearth. There are usually two tuyers or more in the hearth. The tuyers are made of sheet copper and they are fed by bellows B, which are driven by a wheel powered by water A. The wheel has cams 'c' attached at the axle, that raise the lids of the bellows and the levers 'e' regulate the bellows from falling too rapidly by adding or subtracting weights in the boxes 'w'. A hole to drain slag is present at the bottom of the hearth. Above the furnace is placed a brick hood 'v' which serves to carry off the smoke.

The process starts by filling the hearth with charcoal and heating it. The pig iron is either introduced into the middle of the fuel pile or piled on top of the charcoal and air is fed in through the tuyers. After a short while, the pig iron melts and passes through the current of air from the tuyers and falls to the bottom of the hearth. This takes about 3.5 hours. As the molten metal falls, it combines with the oxygen being pumped in via the tuyers and the carbon present in the pig iron becomes carbon dioxide and escapes, leaving behind an alloy that contains much less carbon than before. Any silicon impurities also oxidize and become slag. The molten iron forms as pasty mass (called a bloom) beneath the fuel that it has passed through. Any slag formed during this process is run off through the slag hole, leaving behind just enough to continue the process of decarburization of the iron. When the partially refined iron bloom has become large enough, a workman rolls it up into a ball using a strong bar of iron and then pushes is back to the top of the fuel and adds more charcoal as needed. As the iron melts and falls down to the bottom of the hearth for a second time, even more carbon is removed as carbon dioxide and the remaining relatively pure iron forms a spongy mass. This mass is rolled into a large ball again and then removed and hammered by a large tilt hammer powered by water. The hammer head is about 800-1200 lbs in weight and made of cast iron or wrought iron. The hammering process compresses the iron mass together and pushes out any slag through the pores. The result is wrought iron which contains less than 0.1% carbon. The slag that contains a  relatively higher portion of iron is not thrown away, but is recycled for the next round of melting, along with any bits of iron that fly off during the hammering process. The process is pretty efficient in that about 100 lbs. of pig iron will produce about 85 lbs. of wrought iron. For every 100 lbs. of wrought iron produced, the process uses up around 150 lbs. of charcoal. It must be mentioned that the fuel used in this process must be charcoal, because impurities in other fuel types can affect the iron alloy and add other undesirable elements to it, changing its properties.

In the Walloon process, the finery forge is used to melt the iron as described above and then it is hammered to remove the slag. Then the iron is heated again in a separate chafery forge, not to melting temperature, but just enough to make the iron soft, so that it can be shaped into bars of standard sizes. The bars of iron can now be sold to customers. The finery forge must use charcoal as its fuel, for the reasons explained above in the previous paragraph, but the chafery forge can use other fuels such as coal or gas as well, because it does not heat the iron enough to melt it and therefore cannot add impurities to the alloy. Typically, the Walloon process would use one chafery for every two or three finery forges.

The wrought iron produced by these processes is relatively pure iron and is easily shaped and weldable, therefore, it can be used to produce barrels using methods we studied a while back.

In 18th century England, the best quality grade of iron available was called "Oregrounds iron". The name is actually because the iron was exported from a small Swedish city called Öregrund. Most of Sweden used the German forging method, but the area around Uppland (where Öregrund is located) used the Walloon method. The Walloon process was taken from Belgium to Sweden by a Walloon/Dutch merchant named Louis De Geer, who also brought a group of Walloon workers with him to work in his factories. Other Walloon and Dutch people followed his footsteps into Sweden and established more finery forges. Their products became very famous in England for their high purity. Interestingly, one of the reasons for the iron's purity was because oregrounds iron was chiefly made of ore from a Swedish mine called Dannemora, and this ore had some manganese in it. The manganese in the ore caused some impurities that would have normally stayed in the iron, to instead combine with the manganese and run off as slag. This pure iron was particularly suitable to be converted to steel and was therefore imported by England for the cutlery industry and also for the Royal Navy. At one point, there was a cartel of merchants in London and Bristol that was controlling the supply of oregrounds iron to the extent that they'd bought up the entire output of the Swedish forges several years in advance!

While finery forges can produce high quality wrought iron, there is one rather huge disadvantage that they have. Finery forges have to use charcoal as the fuel, because other fuel types such as coal, peat or gas can add other impurities to the iron alloy, thereby affecting its properties. The charcoal also has to be of high quality for best results. As we mentioned before, by the 18th century, the supply of charcoal was becoming a problem in Europe and entire forests were cut down to meet the demand and there was still a shortage of charcoal. Therefore, other techniques were invented to replace finery forges, the most successful of which was the puddling furnace, which could use other fuels such as coal, coke or gas. This allowed the iron industry to not depend on the growth of trees and ushered in the industrial revolution. The invention of puddling furnaces meant that finery forges began to become obsolete by the latter part of the 18th century. In our next post, we will study the puddling furnace.