In our last post, we saw how people converted pig iron (or cast iron), an alloy of iron useless for making firearms, to a more useful wrought iron, which is much more suitable for making firearms, using finery forges. The one problem with a finery forge is that it needs charcoal for its fuel, as using any other type of fuel will add impurities to the wrought iron and change its properties. However, as the demand for wrought iron rose, the supply of charcoal could not keep up with the demand and entire forests disappeared. Experiments were made using other fuels and the puddling furnace was developed to replace the finery forge. Puddling furnaces could not only produce wrought iron, but were later used to produce steel from pig iron as well. We will study how this worked in today's post.

The invention of the puddling furnace is credited to Henry Cort of Hampshire, England in 1784. Another invention of his was the modern rolling mill, which also was key to starting the industrial revolution.

In our earlier article on the production of pig iron from iron ore, recall that while the iron is melted to separate it from the ore, it comes in contact with the fuel (coal) and combines with the carbon and silicon in it to form the pig-iron alloy. Therefore, one way to remove these elements from the pig iron alloy is to melt it without making it touch the fuel and then blowing air over the molten metal. The oxygen in the air combines with the impurities such as carbon, silicon, phosphorus, sulfur etc. and forms gases (such as carbon dioxide, sulfur dioxide etc.) which escape through the exhaust and leave a purer form of iron (wrought iron) behind. This is the operating principle of the puddling furnace. 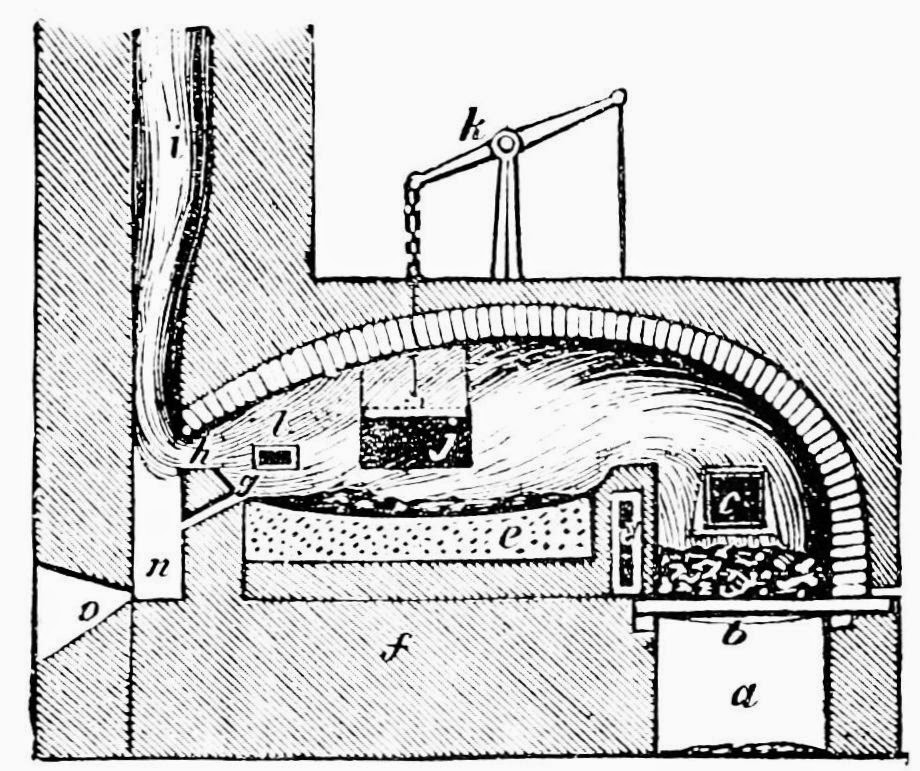 An early puddling furnace. Click on the image to enlarge. Public domain image.

In the above image, we see an early type of puddling furnace. The fuel is placed on an grate 'b' at the right of the furnace and can be refilled through door 'c'. The puddling chamber 'e' is in the middle of the image. It consists of a bed of sand, upon which the pig iron is placed. 'i' is the chimney flue through which the gases escape. The door 'j' is used to access the puddling chamber and it is opened and closed by lever 'k'. As you can see, the fuel in 'b' does not come into direct contact with the pig iron in 'e', therefore it cannot contaminate it. The heat is transferred from 'b' to 'e' via convection and radiation only. As the pig iron melts in 'e', it forms a pool of molten metal, which is then stirred with an iron rod via the door 'j'. At this intense temperature, the carbon in the pig iron burns off and forms carbon dioxide, which escapes via the chimney 'i', leaving behind a pasty mass of relatively pure iron behind. A worker, known as a 'puddler', then uses a pair of tongs to pull the ball of puddled iron out of the furnace and takes it to a power hammer to work it into shape. This process is called shingling. It compacts the iron by welding all the internal cracks, expelling all the slag out and breaking off the chunks of impurities. The iron can later be reheated and passed through heavy rollers (in a rolling mill) to roll it into bars or cylinders, or it can be shaped by using a pair of heavy mechanically operated jaws. 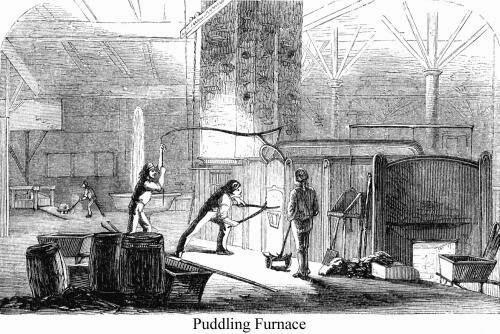 The original process, as patented by Henry Cort, could only be used by a particular type of pig iron called white cast iron, not grey cast iron, which was much more common. One way to handle this was to melt the pig iron beforehand and add flux to remove the silicon (as slag) from the iron alloy, leaving behind white cast iron, which can then be used in the puddling furnace. This process is called 'dry puddling'. A better technique was discovered by a puddler named Joseph Hall in England. He discovered that if a bit of rust (a.k.a iron scale) is added to the grey cast iron before melting in the furnace, the oxygen in the rust combines violently with the carbon in the grey cast iron and forms carbon dioxide. Other elements such as silicon, sulfur and phosphorus also combine with the oxygen from the rust and are removed, leaving the iron behind. This process is called 'wet puddling' and is much more efficient than dry puddling.

The process of the carbon combining with oxygen is exothermic (i.e.) it gives off heat. Therefore, when the carbon first starts burning off, the temperature is around 1150 degrees centigrade (2100 degrees fahrenheit), but since the reaction gives off heat, the temperature of the molten metal rises to about 1540 degrees centigrade (2800 degrees fahrenheit). The formation of carbon dioxide causes the molten metal to puff up. When most of the carbon is burned off as carbon dioxide and escapes out, the iron becomes a pasty/spongy mass (i.e. it was called "coming to nature") and can be removed by the workers and then shingled. Judging when the iron has "come to nature" was an acquired skill that had to be learned by the workers. This is one of the reasons why puddling could never be fully automated.

The use of sand in the bed of the puddling furnace caused a lot of the iron to be removed with the slag, but the above mentioned Joseph Hall found a way around this by using roasted tap cinder for the bed instead, which reduced the waste massively (from around 50% to less than 5%). Further refinements in the process meant that by the mid 19th century, the yield of wrought iron from the pig iron alloy by the wet puddling process was close to 100%.

In 1850, the process of making mild steel in a puddling furnace was invented in Westphalia, Germany and quickly spread to England and France. It only worked with pig irons made of certain types of ore though.

After the pig iron is puddled, shingled and rolled, the resulting wrought iron or steel produced can be used to make gun barrels. We discussed this process in detail many months ago, when we studied how pattern welded barrels were produced. It will serve the reader well to reread the process again.

There were some massive advantages of the puddling furnace over the older finery forge process to produce wrought iron. For one, a finery forge was restricted to using charcoal as its fuel, as any other fuel could cause contamination of the iron. The supply of charcoal was becoming a problem as demand increased and forests were chopped down, therefore finery forges were severely restricted. Since puddling furnaces do not allow the fuel to come into contact with the pig iron, other cheaper types of fuel can be used instead -- coke, coal and even dry pine wood were all used in puddling furnaces. A puddling furnace produces more efficiently than a finery forge: two workers (a puddler and a helper) could produce about 1500 kg. (about 3300 lbs.) of iron in a 12 hour shift.

There are some disadvantages of the puddling process as well, chiefly due to human factors. The point when the iron can be removed from the puddling furnace (i.e. when the iron has "come to nature") to be shingled, has to be judged expertly by the puddler, therefore this process could never be fully automated. This also means that the process depends on how much the puddler and his assistants can handle at one time, so larger furnaces to handle over 500 kg. (1100 lbs)  of pig iron could not be built and if you wanted more capacity, the solution was to build more puddling furnaces and employ more workers. The heat, smoke, ashes, fumes and strenuous labor involved in a puddling furnace caused many puddlers to have short lives. It was unusual to find a worker in a puddling furnace that lived to be 40 years old, as most of them died by their 30s.

In the next couple of posts, we will study how steel for firearms was produced.