In our last few posts, we studied the first few stages of making black powder historically. The stages we studied so far are:


The next step in the process is to break up the pressed cakes into black powder grains of consistent sizes for different firearm types. This process is called granulation and we will study that in today's post.

In the earliest days of firearms, black powder was made of particles of different sizes ranging from dust particles to larger lumps. This made the power of the black powder vary a lot from shot to shot, because of the inconsistency in the grain sizes. Later, grain powder began to replace dust powder. We see the first mention of granulating around 1445, where a manuscript on artillery recommends that lumps of powder are crushed into clods, which propel further than ungranulated powder. We see mention of granulated rifle powder in a work by the Italian mathematician and engineer Nicolo Tartaglia, who wrote a book on ballistics in 1546. We also see a mention of granulated rifle powder in Biringuccio's Pyrotechnia, written in the 1540s.

The earliest methods of granulation involved breaking the powder into smaller lumps using wooden mallets and then putting the lumps onto sieves and then crushing the pieces through the sieve by using a small roller. Later on, the roller was replaced by wooden disks and the sieve was moved under them by hand. By the early 1600s, three or four sieves were put side by side on a wooden frame and the frame was suspended from the ceiling by cords, so as to easily give the frame a shaking motion. The roughly broken cake was put on to the sieves along with lens shaped discs made of a hard wood. By shaking the wooden frame with the cords, the disks would move on top of the powder cakes and force them through the sieves, breaking them up into grains, which would fall into a box placed below the sieve. These grains would then be sorted into different sizes by passing them through other sieves made of brass wire. In some factories, they would place the sieves directly below the granulating sieve, so that the granulating and sorting could be done at the same time.

Another process that was used came from the same technology used in flour-mills. The frame was shaken by a water wheel and grains falling on it would land on an inclined sieve with meshes of a given size. Any grains that were too large would roll over the sieve and be shaken into a box below, while the smaller grains would fall through the meshes of the sieve into a second sieve below of smaller mesh size and so on. 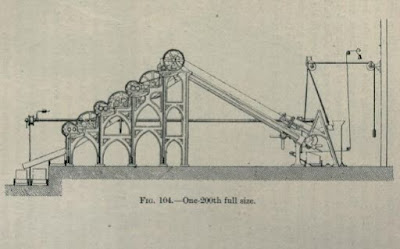 It consists of three or four horizontal pairs of gun-metal rollers on a brass or cast-iron frame. The vertical distance between each pair of rollers is about 2.5 feet. The rollers have teeth on them of different widths. For instance, for fine grained powders, the highest pair of rollers have teeth about 0.5 inches apart, the next pair has 0.25 inch teeth and the two bottom pairs of rollers have no teeth at all. Like the breaking-down machine we studied in our last post, each roller is mounted on sliding counter-weighted bearings so that they will slide apart if a particularly large lump goes through them. The rollers rotate at about 25 revolutions per minute. The machine is fed with the pressed cakes that we studied in our last post, which are placed into a hopper and transported to the machine via a moving endless belt. Short screens covered with copper wire gauze (10-mesh for powder meant for small arms), are placed under each pair of rollers except the bottom pair, so that powder that is too large to pass through the gauze will pass from one pair of rollers to the next. Beneath the short screens are placed two long screens in an inclined position. The upper screen is of 10-mesh and the lower one is of 20-mesh. The machine transmits a shaking motion between 130-150 strokes per minute to all screens while it is working, to assist in the sifting and flow of powder. The grain that falls through the short screens will also fall through the 10-mesh long screen. However, not all of it will fall through the 20-mesh long screen. The grain that is retained on the 20-mesh screen is packaged as Rifle Fine Grain (R.F.G) powder. These grains slide off the 20-mesh screen due to the vibrations imparted to it and fall into boxes, which are made to move forward as each one is filled. The grains that are too large to pass through the short screens fall into separate boxes and are transferred back to the hopper to be passed through the rollers again. The fine powder that falls through the 20-mesh sieve falls into another box below it and is collected and sent back to the incorporating mill to be remixed and pressed again into cakes.

For larger grain sizes, such as Rifled Large Grain (R.L.G) powder, three pairs of rollers were usually used, the two upper pairs with larger teeth and the bottom pair smooth.

A single granulating machine such as the one above, could easily process between 3 to 4 tons of powder per day and transform about 70 to 80% of the quantity treated as serviceable powder.

By granulating the black powder, some of the early disadvantages that were found in black powder are minimized. For one, granulated powder does not separate its ingredients easily during transport, as is the case with black powder dust, which was a huge problem in the early days of gunpowder, which means the proportions of the various ingredients are safely maintained. Granulated powder is also less hygroscopic than dust powder and doesn't absorb moisture as much. Since granulated powder grains are larger, there is less danger in carrying the powder, since there is no dust to fall through gaps in the sacks or barrels. The inflammability of the powder is increased as well, since the powder grains are all within a certain size range and the flame can penetrate more quickly between them.