In our last post, we looked at different types of containers that black powder was shipped in, in the 19th century. 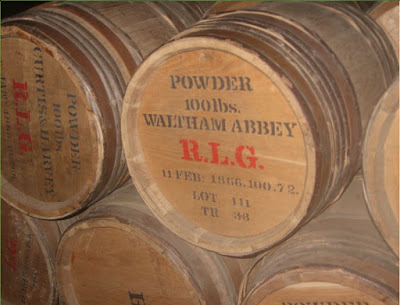 A stack of powder barrels. Click on the image to enlarge.

Now, it must be remembered that black powder is hygroscopic in nature, which means it tends to absorb water from the air. Despite the best efforts to provide a tight seal to the barrels, there is a chance that the powder inside may still absorb some moisture over a period of time, especially if there is a lot of relative humidity in the air. If the black powder absorbs sufficient moisture, then this reduces the burning rate and strength of the black powder. Moisture can also cause caking in the powder. Water also causes the potassium nitrate to separate out of the black powder and can cause corrosion of metal gun parts. Therefore, it was not a good idea to leave barrels stored in the warehouse untouched for many years. We will study some methods that were in use in the 19th century to handle the problem of the black powder absorbing water in today's post.

To handle the caking issue, barrels were generally filled to 90% of their capacity. For instance, in the above image, we see that the barrel holds 100 lb. of powder. The barrel is actually capable of holding about 110 lbs. of powder or so, but it is only filled with 100 lb. of powder, which leaves a little room available for the powder to move around. Therefore, the contents of the barrel are free to move during transport of the powder and this helps break up any large lumps. In England, they would roll the barrels every year over a copper plate on the floor of the magazine, with the idea that this redistributes the contents inside and prevent caking.

In many countries, it was standard procedure to examine the barrels after a certain amount of time had elapsed (which is why the date/year of manufacture was stamped on every barrel). For instance, in France, they examined the barrels once a year for moisture damage. First, they would put each barrel on its side and roll it on a floor covered with hair rugs. If the sound coming out of the barrel was uniform, that meant the powder was good. Any uneven sounds meant that there was likely some moisture absorbed and caked powder inside. In this case, they would open the barrel and determine the moisture content of the powder before deciding how to proceed.

To determine the moisture content in the powder, they would take three samples of powder, one from the top, one from the bottom and one from the middle of the barrel. The samples would be carefully mixed and then 5 grams of powder would be carefully extracted from this sample. This powder would then be subject to a drying process, like the ones we studied previously. After this, it would be weighed again and the difference in weight indicates the percentage of moisture content in the sample.

If the moisture content of the sample was found to be below 7%, then all the powder was simply taken out of the barrel and dried, either by using the sun, or by using an artificial drying process like the ones we studied a few posts before. The barrel was also dried separately. Then the powder was subjected to a dusting process and then re-packed into the barrel. If the powder inside the barrel was found to have clumps in it, then these were broken by hand and was put back into a dry barrel and re-shaken to break up any smaller lumps.

If the moisture content of the sample was found to be greater than 7%, or if the saltpeter had begun to migrate out of the powder, then the powder was subjected to a chemical analysis to check if the proportions of the three ingredients were still within acceptable limits and if so, the powder was sent back to the mill to repeat the stamping process that we studied about a month ago.

Any barrel found to contain moisture was not put back to its original place in the warehouse after the reworking process. Instead, its position was swapped with another barrel from the stack of barrels, so that those that were in the bottom of the pile would now be on top and vice-versa.

In Germany, they would expose the powder to sunlight at regular periods, whether the powder contained moisture or not. The Prussian procedure was to do this every two years, which later changed to every 8-10 years, if the barrels were located inside a dry powder magazine.

In our next post, we will study what was done if the powder was found to be in a damaged state.