In our last post, we studied the processes of dusting and glazing the powder. In today's post, we will study the next process in line: the drying process.

As we studied previously, the ingredients of black powder are moistened before mixing together for safety reasons. In addition to that, potassium nitrate in the saltpeter is slightly hygroscopic (i.e. it absorbs moisture from the atmosphere) and if the saltpeter is somewhat impure and contains calcium nitrate, then it will be very hygroscopic. Black powder is more effective when there is less moisture content, which is why we have the old saying about "keeping your powder dry." We will study how the drying process worked in the 19th century in today's post.

Back in the early days of gunpowder manufacture, drying was done out in the open air. The black powder was simply spread on trays with a wool cloth at the bottom and the trays were placed outside where they could be exposed to the sun's rays. Every few hours, a person would go out and turn the powder grains, until the moisture content was substantially reduced. In fact, in some factories, people would do this once before the first dusting operation. The advantage of drying in the open air is that it saves on fuel costs and the chemical properties of the powder aren't changed either. However this method has disadvantages as well: the rate of drying depends on the humidity of the air. Also, if it is a windy day, the powder becomes much more dusty. Also, if the day happens to be cloudy, then the drying operation will take much longer. It also can't be done during rainy days.


In 1632, we have the account of one Furtenbach, who stated that people had tried drying black powder by placing the black powder grains on copper pans over a fire, but this was banned by law in many places because men had been killed by it. The next obvious idea was to use the heat radiated from a fire, but keep the powder a little distance away from the fire. This led to people building fires in the center of the room and powder placed all around it. Periodically, a worker would go in and stoke the fire to keep it burning, but a small spark rising from the flame could potentially set the room on fire and this type of accident did happen quite a lot. Therefore, the next technique was to put the fireplace in an adjacent room, with no direct connection to the drying room. The fireplace would be surrounded by a copper jacket so that heat could only be passed via convection or radiation. However, by the 19th century, this method of drying was not used any more and in fact, many countries had laws to explicitly ban this method of drying.

Using steam for drying was introduced into the UK in 1780 for the first time. Steam was generated in a separate building far away from the drying room, so that the fire used for generating the steam is kept far away from the black powder. The steam was then conveyed using copper pipes, to the drying room, where it would be piped over wooden boxes covered by copper pans on top, the steam being at temperatures between 130-170 degrees Fahrenheit. The powder was also turned periodically by using a rake, to prevent it from caking during the drying process.

Another technique that was very popular in England and Germany involved blowing a hot current of air over the powder in large drying rooms or special drying-boxes. This method allowed the drying rate to be controlled so that it was not too fast, which meant that the pores of the powder wouldn't open up too much and therefore the powder would be less hygroscopic after drying.

At the Royal Gunpowder Mills at Waltham Abbey, a single drying room could hold about 2.5 tons of powder and the powder was placed in trays on wooden frames. Below the frames, a series of pipes carrying steam were arranged close to the floor. Holes were drilled into both the roof and the floor, so that the heated air from the floor would rise up and exit through the holes in the roof, and be replaced by fresh air entering through the holes in the bottom. The temperature of the pipes and the air was controlled depending on the type of black powder, the size of the grains and the amount of moisture contained in it. For granulated powder, the drying operation took about 6 to 12 hours.

In other setups, such as those in England, France and Germany, fans were used to blow cold air over steam heated coils and then the hot air was piped into drying boxes. 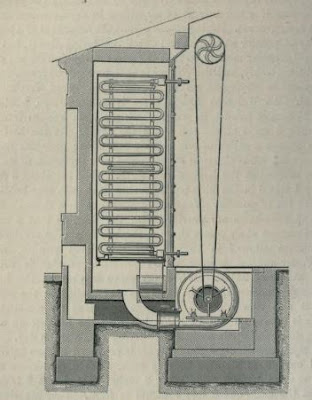 Apparatus to produce hot air for drying. Click on the image to enlarge. Public domain image.

The above image shows one such apparatus to produce hot air. The heating coils are made of iron and steam is passed through them, Air is blown from the top using a fan and the hot air exit pipe at the bottom is connected to drying boxes. The apparatus is enclosed by brick walls to hold in the heat.

Another technique was to use a current of cold air from which all moisture has been removed previously, using chemicals such as calcium chloride, caustic lime or sulfuric acid. The dry air tends to absorb the moisture from the powder and carries it out.

The image above shows one such apparatus. There is a wooden box A, which runs along the whole length of the drying room. About half way up the box, longitudinal strips (b) are fixed, on which a frame (c) covered with a wire gauze rests, covered with dry calcium chloride lumps. The bottom part of the floor is lines with zinc sheets. The bottom of A is inclined towards the right, where there is a pipe D to remove the solution of calcium chloride that will be formed by the drying process. The air is forced in by fan (E) and passes through the layer of calcium chloride and is then piped into the drying boxes, while the calcium chloride solution is collected and after evaporation, it can be reused in the box again.

After the drying process, the moisture content of the powder was generally below 1% or so. The time of drying could vary depending on the type of powder, the temperature of the air, the size of the powder grains etc. One point to note is that drying on frames meant that the trays closest to the steam pipes dried the fastest and those trays which were placed higher up were subject to somewhat cooler air, which was also carrying some moisture from the lower trays. However, the fact that the rate of drying and the temperature could be uniformly controlled made this method very popular in the nineteenth century.

The next process down the line is the final dusting, glazing and finishing process, which we will study in our next post.