In our last post, we looked at the process of turning pressed black powder cakes into grains of uniform size, a process called granulating. In certain countries, such as Switzerland, Austria and Germany, they would perform an additional process to round the grains down, soon after granulating, for certain types of powder. This rounding process was done to ensure that the shapes of the grains were all rounded, instead of being a mixture of rounded and angular grains, which would ensure more uniform grain density and burn rates. We will study the rounding process in today's post.

Right after the grains were granulated, they were conveyed to a rounding table machine, such as the one illustrated below: 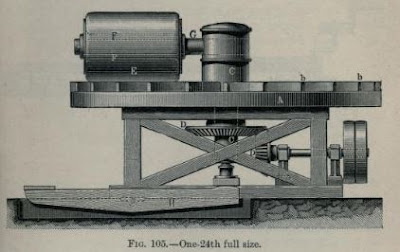 A rounding table machine. Click on the image to enlarge. Public domain image.

The rounding table machine has a circular wooden table (A) on which there are a number of wooden ribs (B) radiating out from the center of the table. These wooden ribs are rounded on top and about 1.25 inches thick and 2.5 inches high. The table has a vertical shaft (C) passing through its center, which can be rotated by a system of gears (D) under the table. There is a horizontal arm (G) which is at right angles to C on the top of the table and is attached so that G turns along with C. A large linen bag (E) is attached to G and the bag has two disks, one on each end, to ensure that it stays in a cylindrical shape. The disks are about 1.5 feet in diameter and the length of the bag E is about 2 feet long and can contain about 100-125 lbs. of powder. A wooden tube (F) passes through the axis of E and holds the two disks in position.

As the vertical shaft (C) rotates, the bag (E) is rolled around the table (A) and the ribs (B). The bag was set to rotate at around 15 revolutions per minute and the whole operation was done for about 20 to 30 minutes. Due to the rotation of the bag, the grains rub against each other and the friction causes them to grind themselves into a round form.

This process was only used for making certain types of powder in the nineteenth century and only in certain countries, as it was not deemed necessary everywhere. The advantage of doing this was that it ensured a more uniform shape for the powder grains.

In our next post, we will study the next few steps of the process: dusting and glazing.