In our last post, we studied how black powder was dried in the nineteenth century. After the drying process comes the finishing process, which we will study in today's post.

During the drying process, there is a small amount of dust generated again because removing the moisture causes some of the grains to fall apart. Therefore, the powder is again subject to another dusting and glazing process (which we studied earlier) followed by a sorting process. These three processes are classified together as the "finishing process". 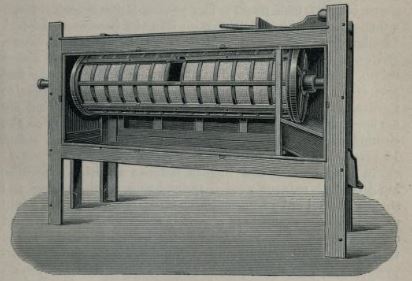 The above image shows a cylindrical sieve manufactured by J & E Hall of Dartford, England. It consists of a horizontal reel about 8 feet long, and 2.5 feet diameter, covered by a fine gauze made of brass wire or silk cloth. Each cylinder was filled with about 350 lbs. (about 160 kg.) of powder and the cylinder was rotated at about 45 revolutions per minute for about three hours. Sometimes, a little graphite powder is added to increase the glossy finish of the powder and render it less hygroscopic. Any dust in the powder grains falls through the gauze into the box.

Due to this dusting and glazing process, the shape and size of the grains are somewhat altered and therefore, many factories would then use a sorting process for a second time. In Germany, the process was to use a sifting reel, much like the apparatus above. However, the first part of the reel would have a wire gauze of a small mesh size, then the next part would have a gauze of a larger mesh size and the next part would have a still larger mesh size and so on. The whole reel would be tilted along its length and rotated at about 12 revolutions per minute. The useless dust would fall through the first part of the reel, then the useful size grains would fall through the next mesh and only the large size grains would remain in the reel.

In other German and English factories, they would mount four sieves from the ceiling, attached to a mechanism to provide a shaking mechanism to the sieves at about 120 strokes per minute. The largest mesh size sieve would be closest to the roof and the finest sieve at the bottom. Powder would be added to the top sieve and the sieves would be vibrated. The largest grain powder suitable for cannon would remain in the top sieve, and grains suitable for rifle and pistol powder would be collected from the sieves below.

Despite putting a lot of care in the sorting process, the powder always contains a certain percentage of grains above and below the desired grain size. Therefore, in order to maintain more uniformity in the process, the powder was then subject to a process called blending, which we will study in the next post.
Posted by The Editor at 10:01 PM