In our last post, we studied some of the physical and mechanical properties of gunpowder, information which will come in handy when we study manufacturing methods in some detail. In today's post, we will look at factors that influence the rate of combustion of black powder.

As we saw in the first post of our black powder series, the ratio of saltpeter, sulfur and charcoal in gunpowders varied at different times and in different countries, but by the 19th century, many people had generally settled to using the ratio of 75% saltpeter, 10% sulfur and 15% charcoal. However, powders made by different manufacturers had different pressures and combustion properties even when they were using the same ratio of the ingredients. We aren't even talking about manufacturers from different countries, they could be manufacturers in the same country or even different powders from a single manufacturer. Clearly there must be some other factors that explain why this happens. That is what we will study about in today's post.

The action of black powder depends not only on the composition of its ingredients, but also the size of the grains, shape of the grains and the density of the grains among other things.There are other factors that influence the rate of burning, but these three are the most important. The reason is because black powder is surface-burning. Smaller grains of gunpowder will have more surface area exposed to ignition than a larger grain of the same weight, therefore smaller grain powder will burn faster than the larger grained type. However, if the powder is packed too densely, the flame cannot easily spread from grain to grain, than the same weight of powder packed in a less compact manner. Therefore, very small grain mealed powder and very large grain powder are both slower burning. The shape of the grain also will affect the burn rate, because of the surface area exposed to ignition. Shapes like cubes or spheres offer less surface area than irregular shaped grains of the same mass, therefore they burn slower. This is why laminated or flaky powders burn much faster than normal and diamond shaped grains burn more rapidly than rounded grains.

As a general rule, the larger the grain, the less violent will be the action of gunpowder (i.e.) its combustion will be more gradual. On the other hand, smaller grain powders also cause pellets to scatter much more rapidly than larger grain powders because a smaller grain powder expends all its force before the shot pellets reach the muzzle, whereas a larger grain powder causes the shot pellets to increase their velocity right up to the muzzle of the gun. Therefore, powder designed for weapons with shorter barrels, such as revolvers and pistols, must be of smaller grain, so that they can finish burning before the powder leaves the barrel. Similarly, powders meant for rifled guns are generally a larger grain than those intended for smooth bores, as a more gradual action is required to avoid putting too much strain on the gun barrel.

Since the same manufacturer often makes black powder of different grain shapes, densities and sizes for different types of guns, therefore the shooting qualities of black powder will vary accordingly. We will look at some powders from the 19th century: 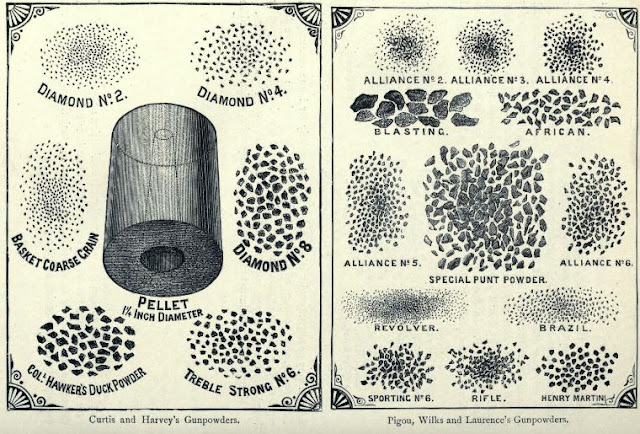 Samples of different powders made by Britsh manufacturers.
Click on the image to enlarge. Public domain image.

The above image shows various black powders made in the 19th century by two large British manufacturers Curtis & Harvey and Pigou, Wilks & Laurence. As you can see, the "Revolver" powder is made of very small grains and designed to be fast burning, while Curtis & Harvey's "Col. Hawker's Duck Powder" and Pigou's "Special Punt Powder" are larger grained and designed to be used by very large bore punt guns. Similarly, Diamond #4 and Alliance #4 were generally used for hunting with shotguns, while #6, Rifle, and Martini-Henry powders were designed for rifles. Other large powder manufacturers in England included the E.C. Powder Company, Schultze Gunpowder Company, Kynoch Ltd., Hall, Coopal, Dittmar etc.

Powders made in other countries also varied in grain size, shape and density:

The above image shows some sample powders made in different countries. Of course, this is only a very small sample. For instance, in the United States in the late 19th century, there were various powder manufacturers, each making multiple types of powder for different applications: DuPont, Hazard Powder Company, Laflin & Rand, Hercules etc.

Various types of black powder made by DuPont

Various types of black powder made by Laflin & Rand.
Images courtesy of the Haglin Museum and Library

The quality of charcoal is also a significant factor in the burning rate of the black powder. If the charcoal is improperly charred, then the oxygen and hydrogen retained in it cause it to burn more rapidly than if it is reduced to a pure carbon. The source of wood for the charcoal is also a factor. Experiments conducted in the 19th century showed that there were significant differences in the amount of gas produced by charcoal made from different types of wood. For instance, dogwood charcoal was found to yield about 25% more gas than the same weight of charcoal made from fir, chestnut or hazel trees and 17% more gas than charcoal made from willow. This is why dogwood was preferred for black powder intended for pistols and rifles, while willow charcoal was preferred for making powder for cannons.

In our next post, we will study more into the classification of grain sizes and shapes.