In our last post, we looked at the manufacture of an early form of black powder called "serpentine powder". As we noted previously, there were a few problems with serpentine powder:


However, towards the early part of the 15th century, powder manufacturers found that it was safer to make powder in a wet state with water and then dehydrate it later, which produced much more consistent results. The addition of water while grinding the materials made it possible to lessen the problem of heat building up from friction while grinding the materials, thereby making it possible to use larger powered machinery to do the grinding and manufacture larger quantities of powder per batch. Wetting the ingredients during mixing also ensured that the ingredients would form a stable grain matrix with less problems of separation. The use of waterpower to drive the machinery also reduced the cost of production of powder.

The earliest forms of making serpentine powder involved repeatedly pounding the ingredients using a mortar made of wood or stone and a pestle made of wood, which was either lifted directly by hand, or by means of a pulley system. This method required a large number of people to work on it and by the 15th century, this process was improved by using stamp mills powered by animals or water to do the job. 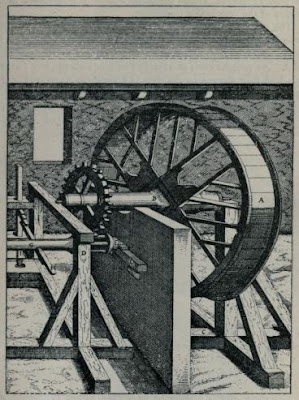 After the grinding was done, the mixture was pressed into sheets or cakes and dried. After that, the sheets were sent into another stamp mill, where large wooden hammers would break off the sheets into grains. The grains were then tumbled together to remove sharp edges and then passed through mesh screens to sort by various grain sizes. The grain size of the largest grains were typically about the size of a grain of corn (which is why the powder got the name "corned powder") and were used for artillery pieces. Grains of powder that were too large or very tiny were simply recycled back into the wet slurry and used to make more powder.

In our next few posts, we will study some of the machinery used from the 15th to the 19th centuries in some detail.