In our last post, we saw that by the 18th century, many countries had settled on a process of making black powder by first grinding the ingredients separately, then wetting them and then combining them and grinding the mixture together. The initial grinding of the ingredients was done separately for safety reasons, since each ingredient of black powder cannot explode by itself, without the presence of the other two. In our last post, we'd studied the various machines they used to grind the ingredients up separately. In today's post, we will study the second half of the process (i.e.) where they mix the ingredients together and grind the grains of the combined mixture again to their final sizes (As we saw before, good quality gunpowder has uniform grain sizes).

The second half of the process is more dangerous because this is where all the ingredients of black powder are being combined together, whereas in the previous step they were handled separately. We will study how the process was done with a view to reduce the risks. Our reference is from notes published by Oscar Guttman in 1895 describing how black powder was manufactured.

After grinding the three ingredients separately, manufacturers in some countries, such as Germany and the UK, performed a preliminary mixing operation in a special mixing-drum. The drum was generally made of a non-sparking metal, such as copper or brass. The drum has a shaft through it, with eight rows of bronze fork-shaped arms fixed to the shaft. The drum rotates in one direction and the shaft in the opposite direction, with the shaft rotating at about 2x the rate of the drum rotation speed. For instance, if the drum is rotating clockwise at 40 revolutions per minute, the shaft is set to rotate counter-clockwise at 80 revolutions per minute. After mixing for about five minutes, the drum is emptied and the contents are sifted by hand to remove undesirable substances, such as wood chips, nails, leaves and other such foreign substances that may have fallen into the mixture. This preliminary mixed black powder is called a green charge. This preliminary mixing process was generally used by British manufacturers and private German manufacturers only, most other manufacturers went directly into the next step described below.

The ingredients were generally combined in two different ways, depending on where the black powder was being manufactured. In France, Sweden, Austria, German military factories etc., mixing drums were preferred for this process. In the UK, Switzerland and privately-owned German factories, incorporating-mills were mostly used. We saw some details about the drums and incorporating mills in our previous post, we will study more about that here.

For mixing drums, the technology is the same as that in the previous post (i.e.) fill a drum with the wet ingredients and a large number of balls made of brass. Then, rotate the drum for a few hours at a rate of around 20-30 revolutions per minute and periodically wet the ingredients during the process. 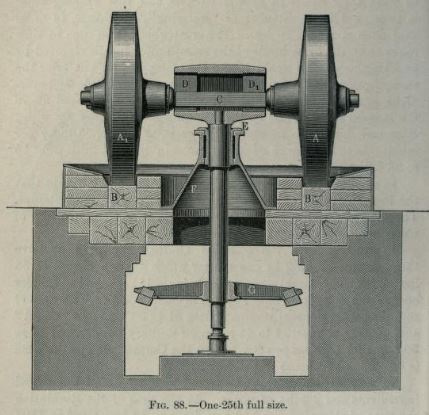 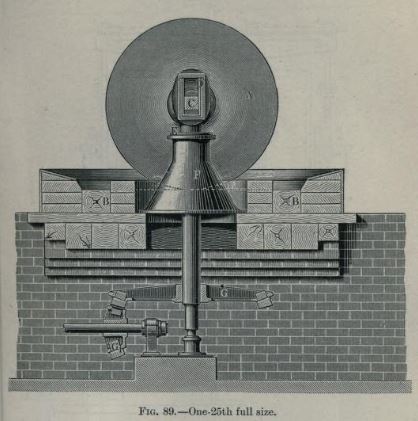 The illustration above shows an incorporating mill used for mixing the ingredients together. Certain features in the design are there to prevent accidental explosions. The bed (B) is made of oak-wood blocks set on edge. This reduces the danger of an explosion from the runner stones (A and A1) dropping suddenly on to the bed after passing over a lump. As can be seen in the second illustration, the shaft (C) is square and can move vertically in its housing (D and D1). In case the runner has to go over a hard lump on the bed, it will lift on the one side alone. The mechanism is driven by a system of gears (G and G1) from below. In order to prevent any powder from falling through to the driving mechanism, the driveshaft and gears are cut off from the bed by the stuffing box (E) and the conical center-piece (F).

In earlier times, the runners were mostly made of stone (after all, the technology did come from olive-oil manufacturers), but by the eighteenth and nineteenth centuries, the runners were generally made of chilled cast-iron, which were ground and polished very well so that the running surfaces are quite smooth. In France, the mills generally mixed about 55 lbs. of ingredients at a time, whereas in England, the maximum amount was 50 lbs. for rifle powder and 60 lbs. for cannon powder.

The process starts by taking the three ingredients (or the preliminary mixed "green charge" above) and spreading it as thinly as possible on the bed by using a wooden rake and moistening the ingredients with distilled water. As the ingredients are mixed together, the charge starts to become drier and more water needs to be added periodically to prevent the black powder dust rising. On the other hand, if too much water is added, then the mixture will stick to the runners. In France, the standard for moisture content was about 6-7%.

The time of mixing the ingredients depends on the type of powder being manufactured. In the UK, it was 5.5 hours for rifle powder and 2-3 hours for cannon powder, whereas most French manufacturers ran the process for only about 2.5 hours.

Of course, even with these precautions, there were still occasional explosions for various reasons, such as excess mechanical vibrations, heat from friction, static electricity discharges etc. The last of these caused many mills to ensure that their mills were properly grounded for this very reason, Nevertheless, explosions still happened occasionally and therefore, techniques were developed to try and contain the damage as much as possible. 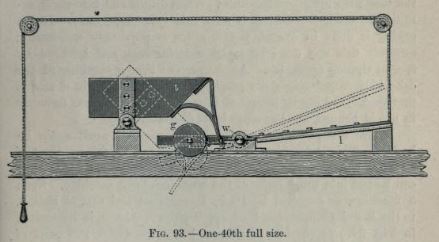 The above illustration shows safety apparatus that was used in England's Royal Waltham mills and later in every British factory. This apparatus is designed to immediately flood the incorporating mill with a large quantity of water the moment the charge ignites. This "drenching apparatus" is designed so that it floods all the incorporating mills in the area simultaneously, thereby preventing the flame from jumping to its neighbors. It consists of a flat board (I) turning around an axle and kept in position by a counter-weight (g). A hinged container (L) filled with water is connected to it so that if the board is moved even slightly, the container will turn over into the position shown by the dotted lines, and the water will pour down over the incorporating mill. Each mill has a container of water over it and the boards over all the incorporating mills are connected to each other by the horizontal shaft (w). This means that in case of an explosion happening on one mill, all the other mills are drenched simultaneously, to prevent the flame from spreading. In emergency situations, a rope and pulley system (seen in the illustration above) allows a person to actuate the apparatus by hand, simply by pulling on the rope.

In our next post, we will study the next part of the process, which is to press the mixture of ingredients into cakes.