In our last couple of posts, we saw how people started to pulverize the ingredients of gunpowder together, in order to maintain a consistent grain size and an even rate of combustion. While the grain sizes were made more uniform, the stamping process had inherent risks when pulverizing all three ingredients together, because the whole thing could explode, especially at the beginning of the stamping operation, due to the ignition of the charcoal. Moreover, the sulfur and charcoal were not always properly pulverized, which affected the inflammabilty of the black powder. Therefore, by the 18th century, people started to pulverize the different materials separately at first, then wet them and combine them and then pulverize the combined mixture again to a consistent grain size. We will study that process today.

In France, in 1763, a gentleman named Desparcieux proposed the idea of pulverizing the separate materials separately in different stamps, but the idea wasn't practically adopted in France until 1794, at which point, about one-sixth of the total stamping machines in France blew up annually. By the nineteenth century, stamping machines were rarely used in Europe and incorporating mills and pulverizing drums (ball mills) were used instead.

Incorporating mills are based on technology that already existed at that time -- a form of this mill was used for centuries past to extract oil from olives. A person named Cossigny introduced an incorporating mill for gunpowder manufacturing in France in 1787, and in 1792, another person named Carny suggested pulverizing in drums. These technologies came to the forefront in France because the French Revolution had occurred and the existing stamp mills could not keep up with the demand for gunpowder. In 1795 though, the process was generally abolished in France for some reason and only came back in use in 1822. By the end of the nineteenth century, all pulverizing in Government factories of France was done in drums, whereas the UK used incorporating mills for both military and private factories. In Germany, the military factories used drums, but private manufacturers generally used incorporating mills. 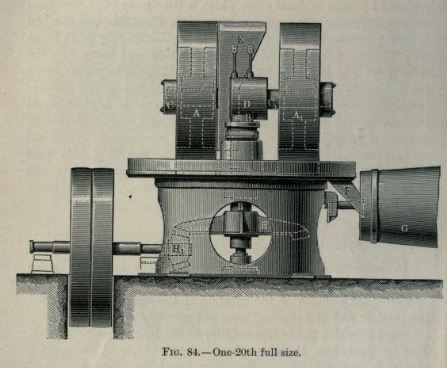 A typical incorporating mill in the nineteenth century

The above is an incorporating mill made in the nineteenth century by the German company Krupp, Grusonwerk of Buckau-Magdeburg and suitable for pulverizing all the ingredients. It has two large heavy runners, A and A1. Notice that these two runners stand at unequal distances from the central vertical shaft of the machine -- this is a deliberate design choice. The two horizontal shafts, C and C1, that these two runners rotate on, are actualy placed so that each can rise independently of the other in the horizontal cross-head (D). The raw material is placed in the chute (E) and scrapers rotating with the main shaft rake up the material on the bed. A second chute (F) on the right side of the bed serves for emptying out the pulverized material into a sifting cylinder G. The mechanisms of the incorporating mill is driven by a gear train (H and H1). 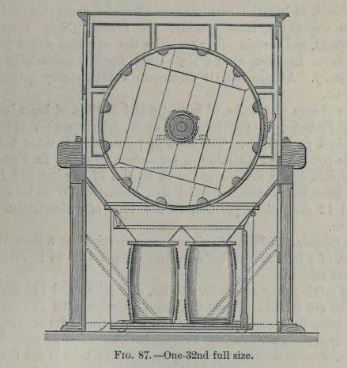 A typical pulverizing drum in the nineteenth century

The image above shows a pulverizing drum (ball mill) from the nineteenth century. This particular model was in common use in France. The ingredient to be ground was put in, along with an equal weight of brass balls and then then drum was rotated at about 20 revolutions per minute. The brass balls tumble about inside the drum and crush the material in between them to powder. Notice that the circumference of the drum has several wooden bars attached to the inside. The purpose of these is to provide a bumping motion to the brass balls as the drum rotates. The time of rotation of the drum varies depending on the type of powder desired. For example, rifle powder was generally pulverized for three hours, but cannon powder was only pulverized for 15 minutes. Each drum could handle about 110-220 lbs. (50-100 kg.) of ingredients in a single charge. The drum is also electrically grounded to prevent any static electricity from igniting the charge. After the material has been ground, the drum is stopped and a brass sieve is inserted and then the drum is again rotated until the powdered ingredients fall through the sieve into the container below, leaving the brass balls behind. The grinding process gradually wears on the brass, so they were weighed after the operation and any loss in weight was made up with new balls.

Usually, sulfur and saltpeter were ground together initially, because the sulfur cakes otherwise. The charcoal was ground separately. Then the three ingredients were combined together and sufficient water added to bring the moisture content to somewhere between 16-20% and the mixture is again passed through another set of incorporating mills or drums. We will study those machines in our next post.