In our last few posts, we looked at how grain sizes of black powder are/were classified in the US and in 19th century England. In today's post, we will look at an early form of black powder, that was called "serpentine powder".

In the earliest days of firearms, the three ingredients of gunpowder, namely saltpeter, charcoal and sulfur were combined together in a dry state. This powder was often referred to as "serpentine" powder. Why the name "serpentine"? Well, there were some early forms of cannon called the "Cannon serpentine" and "Serpentine". The table below shows some details: 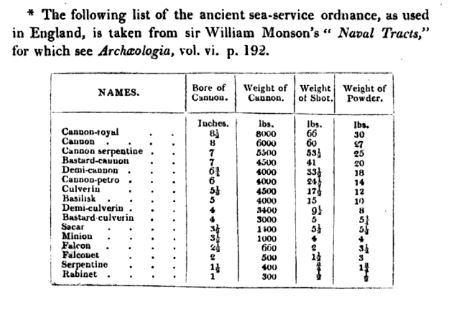 Types of Cannon in England during the 16th-17th century. Public domain image.
Note that serpentine cannon date back to a few hundred years before this list was made.

Some authorities say that "serpentine" artillery tended to be long and thin, resembling a snake, which is why they were named that way. Other authorities claim that "serpentine" is an allusion to the serpent in the Garden of Eden, who was Satan in disguise, and cannon were considered to be the work of the devil in the middle ages.

Whatever the origin of the name, the powder made for such weapons was called "serpentine powder".

To prepare serpentine powder, the saltpeter, charcoal and sulfur were first ground up separately using a mortar and pestle, then the three ingredients were mixed together in the desired ratio to form the serpentine powder.

Since the three ingredients were mixed together in a dry state, there was the potential of explosive dust floating around and many powder makers met with accidents during work. Even after it was mixed together, serpentine powder was somewhat unstable and had the tendency to absorb moisture from the air (due to impurities in the saltpeter), which could cause it to spoil. The reliability of serpentine powder was also not very good and its explosive force was hard to predict. If it is packed too tightly into a gun, the charge may fizzle out or it may develop cracks and detonate, destroying the gun.

One more problem with serpentine powder is since the ingredients are ground up separately and then combined, the ingredient particles would often be of different sizes. What this meant was when transporting a barrel of gunpowder in a cart across bumpy and muddy roads, the vibrations would cause the ingredient with the smallest particles to settle at the bottom of the barrel and the ingredient with the larger particles to move to the top. We discussed why this happens a few posts earlier. Since the three ingredients are particles of three different sizes, this would cause the ingredients to separate themselves, so pulling a sample of powder from the top of this barrel would consist of largely charcoal, but very little saltpeter or sulfur, which would not ignite very well. This meant that they would have to remix the ingredients again at their destination, to ensure the proper proportions of the gunpowder mixture. This was a hazardous procedure that produced clouds of explosive dust and wasn't convenient to do in the middle of a battle.

As you can see from the video, there is a pretty big difference in the combustion rates of the two powders and serpentine powder produces less power.

In our next article, we will look into the corning process, which solves many of the problems of serpentine powders.