In our last post, we looked into how black powder grains are classified by size and type in the US, from the 19th century onwards to the present day. In today's post, we will look at the classification of different powder types in England in the 19th century.

It must be remembered that before the invention of smokeless powder in the latter part of the 19th century, people used black powder for everything from the smallest pistol to large cannon. Therefore, they had to have different types of black powder to accomodate all these weapon types. In England, smoothbore weapons were used as well as rifled weapons. For instance, the Brown Bess musket (which is a muzzle loading smoothbore weapon) was produced by the British from 1722 to about 1860 or so.

We noted a couple of posts ago, that the average size of the grains is a huge factor in the combustion rate of gunpowder. With the introduction of rifled guns, it was considered a good idea to use a powder that would burn more gradually and strain the gun less, than the powder then in use for smoothbore guns. Rifled guns do more work than smoothbores because not only do they impart a forward velocity on the projectile, they also introduce a rotational velocity to it. The weight of projectiles in a rifled gun also tends to be greater than that of a smoothbore gun of the same caliber. For example, an 8-inch rifled cannon of that era threw a projectile of weight 180 lbs., whereas the standard load for a 8-inch smooth bore cannon was a 68 lbs. ball.

For larger cannon, a powder designated as "Large Grain" or L.G. was used, until the advent of rifled cannon, at which point a powder called R.L.G (Rifled Large Grain) was introduced. This powder worked well for cannon of smaller caliber, but when guns of 7 inches and larger calibers were introduced, it was found advisable to use a slower burning powder than R.L.G, at which point, Pebble powders (P and P2) were introduced. These were larger grain powders of cubical-shaped grains. P powder grains were about 5/8 inch per side and P2 powder grains were 1.5 inch cubes. We will study the manufacture of these powders in a later post.

For small arms, a more rapidly burning powder is required, and therefore these are much smaller grains on average than the ones above. In England, there were four grades of powder produced for small arms:

In addition to these powders designated for service small arms, there were also powders classed as "Blank powders", used for training purposes. As with the above powders, these were also made in different grain sizes, (e.g. Blank R.L.G., Blank R.F.G., Blank F.G. and so on). These were made from recycled gunpowder from old shells and broken ammunition boxes and only used for firing salutes and training rounds, where the full power of ammunition was not considered critical.

The following images show the markings of barrels containing different types of powder: 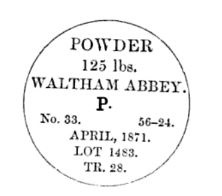 The above image shows a facsimile of a barrel containing P-grade powder (i.e. Pebble powder). The markings tell us the name of the manufacturer ("Waltham Abbey"), the weight (125 lbs.), the type of powder (P, printed in red paint), the manufacturing date and lot number. The 5th line in the image is also interesting, because it tells us the brand of powder (No. 33), the total number of barrels in this brand (56) and the number of this barrel in the brand (24). All this sort of information is put on a barrel containing newly manufactured powder.

In the above three barrels, the topmost one (No. 2) is a returned powder, which was examined on May 20th 1869 and determined to be still suitable for service. The grade of this powder is Large Grain (L.G.) and the letters L.G. are marked in red. The middle barrel (No. 3) is also a returned powder, which was examined, was re-dusted and repaired for service. It is a Rifle Large Grain (RLG) powder and like the one above it, the letters RLG are painted in red. The date of re-dusting is marked as well. The bottom barrel (No. 4) is different from the other two, as it contains Large Grain Blank powder, intended for military exercises and firing blanks. This is made from powder that was extracted from broken cartridges and old cannon shells and returned powders which were found to be too dusty or broken in the grain, to be used in active service.

These barrels were shipped to filling stations where cartridges, shells etc. were manufactured. To enable tracing where a cartridge or shell was filled, each station with a lab had its own unique monogram, as the illustration below shows: 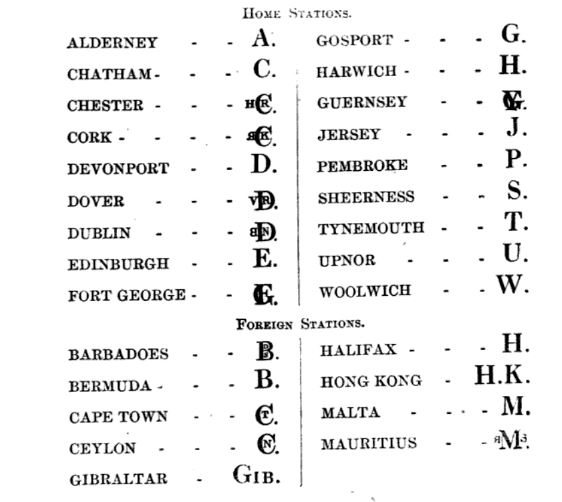