The rolling block action was one of the more successful actions from the 19th century. It was first patented by Leonard Geiger in 1863. The design was later improved by Joseph Rider, the plant supervisor at Remington Firearms factory in Ilion, New York, in between 1863-1865. Rider even convinced Geiger to join Remington Arms and together, they improved the design of this action. This action is the reason for the Remington Company still being in existence today, since they were about to go into financial ruin before they came out with this design. It was so successful that Remington alone produced approximately 1.5 million firearms using this action by the beginning of the 20th century. This action is so much associated with weapons made by the Remington company that it is sometimes also called the "Remington action." 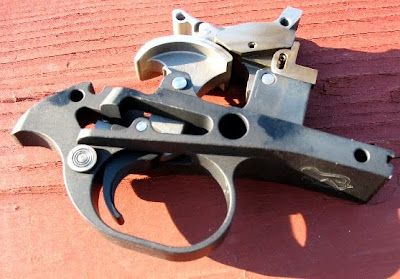 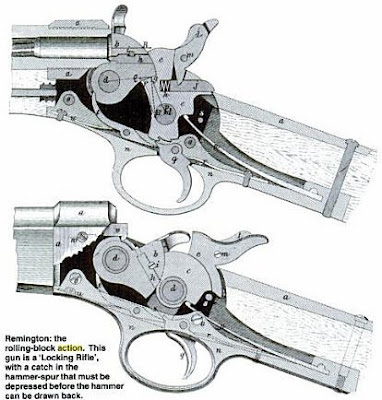 To open the weapon, the hammer is cocked back fully, which frees up the rolling block to pivot about the pin, as can be seen in the images above of a typical Remington rolling-block rifle. The user first thumbs back the hammer into full cock position, then uses the finger spur to rotate the rolling block piece, thereby exposing the barrel chamber. The gun is then reloaded and the breech block is rotated back into its closed position. When the user pulls the trigger, the hammer not only strikes the firing pin, but it also cams under the breech-block, locking it firmly into place at the moment that the cartridge discharges. This prevents the cartridge from moving backwards as the gunpowder propels the bullet forward. 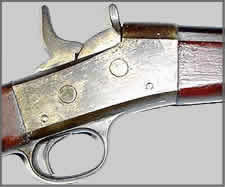 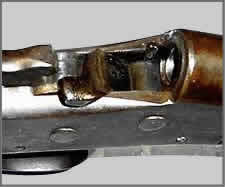 This action was first used in the Remington Model 1865 pistol which was purchased by the US Navy. Remington then made the Model 1867 carbine for the Navy order. However, the US orders were relatively small (only 5,000 weapons or so) and the real success of Remington started when their M1867 rolling block rifle design was shown in the 1867 Paris Arms Exposition. Soon after that, it was adopted by several countries around the world.

Denmark and Sweden-Norway (Sweden and Norway were one country then) all adopted rifles with this design between 1867 and 1868. Denmark bought 41,800 rifles and Sweden-Norway bought 10,000 rifles and 20,000 actions. They also negotiated license agreements to manufacture these weapons in their own countries: Sweden at the Husqvarna and Carl Gustav arsenals, Denmark at the Kobenhaven Tojhuis arsenal and Norway at Hoverdarsenalet and Konigsberg. The companies, Husqvarna and Carl Gustav, are still around today. Egypt was the next Remington customer with an order of 60,000 rifles in 1869. In the same year, Spain ordered 85,000 rifles and 10,000 carbines and also signed a license agreement to manufacture their own rolling block rifles. Order quickly flowed from Netherlands, Japan, France, Argentina, Greece, Mexico, Columbia, Cuba etc. Licensed manufacture in Europe was done by Nagant Brothers (later known for the Mosin-Nagant rifle), Francotte and Westley Richards, among others. In total, 101 countries were quick to accept this rifle. It even features in the present day in the National flag of Guatemala.

Design improvements were quick to follow. Research in the US military showed that people were reluctant to reload the rifle with the hammer at full-cock position, in case the hammer could accidentally discharge. The Remington model 1871 had an additional half-cock safety. In this, when the breech is closed, the hammer automatically drops from full-cock to half-cock. The user must then re-cock the hammer to fire. The Remington Model 1871 rifle was one of the most accurate in the world for its time and demonstrated this at the international rifle matches of 1874. This model was also manufactured under license as the Springfield M1871 rifle.

The rolling block design was manufactured for approximately 70 years (not counting modern-made replicas). Rolling block action weapons were manufactured, not only by Remington, but also license manufactured by other countries. It is estimated that over 70 million firearms were produced using the rolling-block action. It has been used from weapons ranging from .22 caliber rimfire cartridges to .58 caliber weapons and used for pistols, shotguns and rifles. It was reputedly made for every possible caliber offered by any black powder cartridge and even the early 7 mm. Mauser smokeless powder cartridge and the 8 mm. French Lebel cartridge. It was popular with military forces around the world and also with big game hunters.

Why was this action so successful, one asks? The reason is that it is a very strong action, but it is also very simple and reliable. It has only a few moving parts and is not prone to jamming by dirt and rough handling, like some of the other actions we've studied previously. The action is so simple that even an illiterate person could be taught how to maintain this action very quickly and because of its simplicity and reliability, it found favor with several military forces. There is very little that can go wrong with the rolling block action, other than occasional breakage of springs and extractors. It also can be fired equally well by left-handed or right-handed users, since the parts are equally accessible from either side. The other main competitor was the tilting-block action used in the Martini-Henry rifle. The Martini-Henry action has 37 moving parts, whereas the rolling block action has 22 moving parts and they seemed to do better in dirt and sand.

Here's a video of the Remington Rolling Block rifle in action:

The Remington rolling block action had a long history of service due to its reliability and ease of maintenance. The parts were precision made with quality steels and heat treatment, with close machined surfaces, ensuring a long life and reliability.

One disadvantage of the rolling action is that the holding bolts are below the center line of a cartridge. Rolling Block rifles began to be replaced by bolt-action rifles mainly because of their higher rate of fire and also stronger actions. A bolt-action holds the cartridge both below and above the center-line of the cartridge, which allows more powerful cartridges. A bolt-action can also be fitted with a multiple cartridge magazine, allowing faster reloads.

The rolling block rifles did enjoy a long history and replicas are still being made today.
Posted by The Editor at 4:35 PM