In our last few of posts, we've studied the basic principles of a blowback action and the reason why we want to delay the blowback action. In some of our last posts, we saw that mechanical means can be used to delay the movement of the bolt, as well as a method that uses friction and one that uses some of the generated gas to slow down the bolt. In this post, we will look at some other ways to delay the backward movement of the bolt
Chamber Ring Delayed
When a metallic cartridge is fired, the cartridge case expands slightly and seals off that side of the chamber and prevents gas escaping that way. Therefore, in all breechloading guns, the diameter of the firing chamber is slightly larger than the unfired cartridge case's diameter, so that the cartridges are easier to load. In a chamber ring delayed action, the back of the firing chamber has a ring around it on the inside, which makes the front of the firing chamber have a slightly larger diameter than the back of the chamber. So when the cartridge is fired, it expands to fill the chamber. However, since the front of the chamber has wider diameter, the front of the cartridge expands more than the back. Now when the cartridge is being pushed backwards by the expanding gases, the front of the empty case, which is now expanded to a larger diameter, rubs against the ring and slows down due to friction. Since the case is the one pushing the bolt back, slowing down the backwards movement of the empty case also delays the bolt motion correspondingly. This mechanism can usually only be used by really compact weapons, such as weapons made by L.W. Seecamp Co. 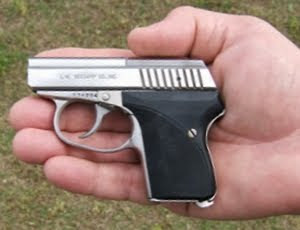 Seecamp LWS .32 ACP Semi-automatic pistol.
Image created by BillyTFried and used under the terms of GNU Free Documentation License version 1.2.
Off Axis Bolt
The next mechanism was invented by the famous firearms designer, John Browning. In this action, the motion of the bolt is not along the same axis as the barrel. Hence, when the bolt moves backwards, it moves along an inclined place placed at an angle compared to the barrel and thereby has more resistance to backward motion without increasing the bolt's weight correspondingly. This allows the weapon to have less recoil and less muzzle climb when firing in automatic. This mechanism was used in the 1938 French made MAS-38 submachine gun, has been used in some modern firearms as well, such as the US made TDI Vector submachine gun manufactured in 2009 and the Finnish Jatimatic submachine gun made in the 1980s. None of the firearms using this action have seen widespread popular use though.
Hesitation Locking
This is another design by the famous Danish-born US firearms designer John Pedersen, who we already encountered when discussing lever-delayed blowback actions. The Hesitation Lock action was designed by him when he was working for Remington and has only been used in one firearm model ever, the Remington 51 pistol, first made in 1917.
In this design, when the cartridge is fired, the empty cartridge case pushed back on the bolt, which causes the bolt to move backwards along with the slide. The cartridge case, bolt and slide initially all move back together for a short distance. Then the cartridge case and bolt stop moving because the bolt is stopped in place by a projecting locking shoulder, but the slide continues to move on backwards. This gap between the bolt/partially extracted cartridge and the chamber allows a little of the expanding gases to escape through the back, while most of it goes out through the front, along with the bullet. Meanwhile the slide continues to move on backwards and impacts a cam which rotates and releases the locking shoulder, which now allows the bolt and cartridge case to now freely move backwards. Meanwhile the bullet has already exited the barrel and most of the high pressure gas has also exited in that direction, so the pressure in the chamber has now dropped to a safe level. The empty cartridge case and bolt now continue backwards and the cartridge case is ejected via an ejection port. When the bolt goes to the maximum distance backwards, it is then pushed forward by the recoil spring and picks up a new cartridge from the magazine, just like a straight blowback action.
Due to the locking shoulder, this weapon can handle higher powered cartridges than a straight-blowback action. It also has lower recoil and less muzzle climb when firing. Remington also made the model 53, which used the same action, but was chambered for a .45 ACP cartridge. The Remington 53 had less recoil and muzzle climb and was deemed to have a simpler mechanism, lighter and more accurate than a Colt M1911 pistol, which was the standard sidearm of the US military at that time. However, when it came to getting a military contract, Remington wanted too much money up front and then World War I started and the United States military decided to continue with the M1911, since they already had a large investment in machinery and tooling for the Colt pistol. The Remington 53 never really found enough sales in the civilian market and so Remington went back to making the model 51, which they continued to do until 1928.
Posted by The Editor at 9:19 PM