We will now look at some coating treatments which are usually applied on top of some of the other treatments we studied previously to give it additional resistance to corrosion.
The first treatment we will look at is Teflon coating. Teflon was originally invented by DuPont in 1938 and is one of the slipperiest substances in the world. It is used to coat non-stick pots and pans in the kitchen, but is also used in industries like aerospace, electronics, architecture and now, firearms as well. Teflon can be applied on top of stainless steel parts, blued parts and metals like titanium and aluminum. A Teflon coat has more resistance to wear than bluing. It is also completely weatherproof and prevents rust from forming by preventing any humidity from reaching the metal underneath. After a teflon coat is applied, there is no need to oil the gun further as teflon is self lubricating and only gets more slipperier as it wears down. This means that there is no chance of the oil in the gun freezing in cold temperatures. Cleanup is also simple because all it takes is an air hose and a quick wipe down. It also comes in a few different colors, so if the user desires to have a black or a camouflage coating applied to a bright stainless steel barrel, it is possible to simply apply a teflon coat to take care of this. 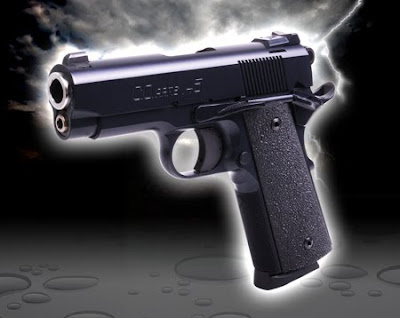 The above is an All Weather Pistol manufactured by C.O. Arms. It is made of SAE 4140 carbon steel and aluminium and is coated with teflon. In this example, the firearm is coated black. 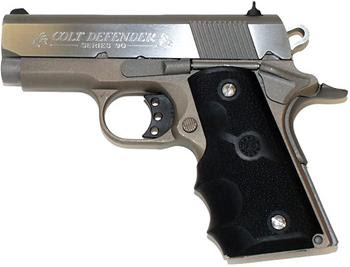 The above is a Colt Defender with a stainless steel slide and teflon coating. The teflon coat is clear in this example.
Another coat is called KG Gun Kote, which was invented by KG Industries LLC. This was originally designed to the specifications of the US Navy's SEAL team 1. The requirement was for a coat that would withstand at least 500 hours of a standard salt spray test (5% salt solution sprayed continuously in a chamber) and still meet the military machine gun firing requirements. Gun Kote is a phenolic resin that is designed to be applied by spraying on or dip spin. It is then thermally cured at temperatures between 300-325 F. The resulting coat is only 0.0003-0.0005 inches thick, but is tougher than bluing or parkerizing and has a pencil hardness greater than 9H. It is abrasion resistant, chemical and corrosion resistant and has lubricity. The lubrication is produced by molybdenum disulfide. Gun Kote has also been tested against a number of chemicals ranging from sulfuric acid to hydraulic oil and successfully resisted them all. One version not only passed the 500 hour salt-spray test, it actually lasted over a 1000 hours with no problems! The South African military tested it on an equivalent of a 7 year corrosion test, which it also passed. Like the teflon coat, it also comes in a number of colors. Since the original product, they have come up with a number of different formulations. Many manufacturers such as Kimber, Buzztail etc. use KG Gun Kote and it can be applied to other vendors products by third party gunsmiths as well. 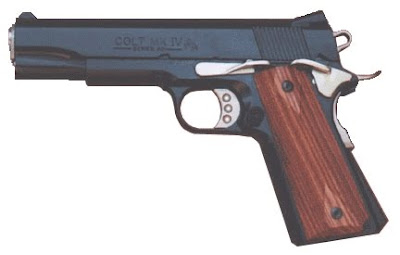 Colt 1911 pistol coated with Gun Kote
Another coating treatment is Duracoat by Lauer Custom Weaponries. It is an extremely hard polymer, which is resistant to oil and cleaning chemicals. It is also somewhat self-lubricating. Duracoat hardness is between H than 2H pencil hardness and it has good impact resistance as well. It can easily pass a 300 hour salt spray test. It can be applied to almost any surface (metal, plastic, wood) as long as proper preparation of the surface and pre-treatment is done. The substance is quick drying -- it is dry to the touch in 20 minutes and the weapon can be used in 6-8 hours. It continues to cure for 4-6 weeks afterwards though. Duracoat is available in a very wide range of colors (over 130 standard colors and 11 standard camouflage patterns). One of the very good advantages of Duracoat is that it is very temperature resistant and can easily withstand over 1800 degrees F. Therefore, it is an excellent choice for weapons with a high sustained rate of fire, such as LMGs or fully-automatic rifles. 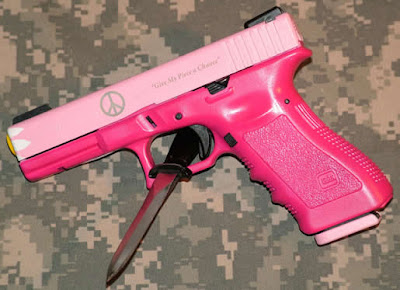 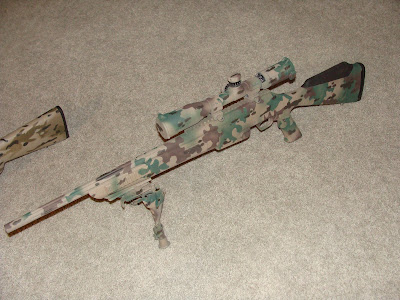 FN rifle painted with camouflage duracoat colors.
Another coating treatment is CeraKote invented by NIC industries. This is a ceramic based coating and comes in two types: "C" series, which cures in normal temperatures and "H" series, which is a thermal cure coating. Cerakote offers very good abrasion resistance, corrosion resistance and hardness. Because of its ceramic base, it is harder and over 60% more wear-resistant than teflon. Since it is also self-lubricating, a firearm requires very little oil on top of it. The C series has a pencil hardness of 7H and can withstand over 550 hours of standard salt spray test. It can also withstand over 1200 degrees F over extended periods of time without failing, which makes it very suitable for weapons with high rates of fire. The "H" series can pass 2500 hours of salt spray test and withstand 550 F temperature for extended periods of time. It comes in 31 colors. 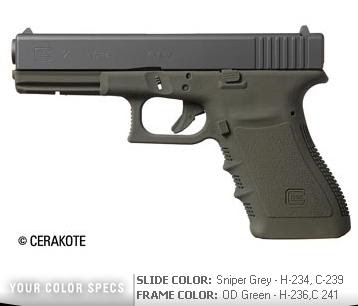 NIC industries offers a test page which allows the user to test various color options for Cerakote on a Glock pistol.
Posted by The Editor at 10:56 PM