One of the variants of the Gardner Gun is an interesting weapon called the Bira gun. This was invented by a Nepalese General, Gehendra Shamsher Jang Bahadur Rana and named after the reigning Nepalese monarch of the time, King Prithvi Bir Bikram Shah. It has the distinction of being the last mechanically cranked machine gun ever manufactured.
The history of the Bira has to do with the political situation between Nepal and British India at that time. Under a Nepalese-British agreement, the Nepalese government allowed the British to trade with Nepal and Tibet and allow recruitment of Gurkhas in the British Indian army. In turn, the British agreed to sell firearms and ammunition and a wide variety of armaments to the Nepalese. However, despite Nepalese requests to purchase machine guns, the British declined to do so, because they feared that the Nepalese would clone these (which they already did with some other British origin firearms) and then they would have too many automatic weapons and could challenge British power in India.
Undaunted, the Nepalese set upon building their own machine gun design around 1896-97. Without a background in firearms design, it was decided to start by borrowing a design from somewhere else, in this case, a British model of the American Gardner machine gun. The firing mechanism was essentially the same as the Gardner gun, but there were some other significant differences. 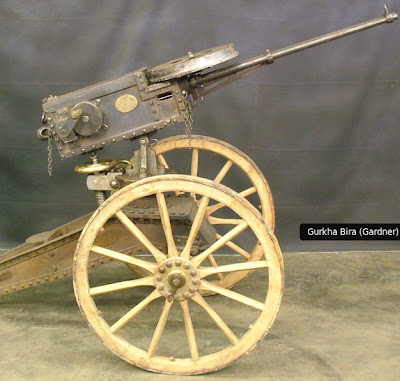 The first difference is that the caliber of this weapon is different from the Gardner gun. Since the Nepalese had already built up a large supply of ammunition for Martini-Henry rifles, it was decided to make their machine gun use the same cartridges as the Martini-Henry (i.e.) the 0.577-450 cartridge.
Unlike the Gardner gun is that the Bira doesn't have a vertical magazine for holding ammunition. Instead, it uses an drum magazine mounted horizontally on top of the barrel. The flat circular drum magazine can be clearly seen in the picture above. The drum magazine could hold up to 120 rounds, in 60 rows of 2 rounds each, one on top of the other. The magazine weighs around 14 kg. when empty and about 19 kg. when fully loaded with ammunition.
Biras were mostly made of iron and steel parts, but the wheels were made of teak wood and brass was used for the wheels controlling the vertical elevation and horizontal traverse, as well as the gearing used for these.
The Bira has twin barrels very much like the Gardner gun, but there is no cooling water jacket around the barrels.
One more curious difference is that the crank is turned backwards (i.e. counter-clockwise) instead of forwards. This was done because the General opined that it was easier to pull instead of push and since pulling is a more natural movement, it is easier to operate the weapon for longer periods without fatigue.
Since Nepal did not have any modern factories during this time, each gun was hand-made. This meant that they could not interchange parts at all. In fact, in some cases, individual screws on a Bira were marked to fit in specific holes! Similarly, the magazines were also numbered to match the serial numbers of specific guns, since they were hand-fitted individually and would only fit in a particular gun. In the above picture, you can see the serial number plate of the gun: it is the oval yellow plate located between the crank and the drum magazine.
Due to the hand-made nature of manufacturing, only 50 or so Bira guns were ever manufactured. These were put into storage and none of them ever saw any wartime service. By then, the Maxim machine gun had been invented and the Bira became obsolete almost as soon as it was made. In the late 1970s, some Bira guns were put on sale in the market and acquired by collectors in the United States. When one was fired in 2009, it was found that it was still pretty accurate once the sights were dialed in. It was also found that in spite of one of the extractors of the gun being damaged, the gun could still fire due to its rugged design!
Posted by The Editor at 11:47 PM