In our last few of posts, we've studied the basic principles of a blowback action and the reason why we want to delay the blowback action. In our last couple of posts, we saw that mechanical means can be used to delay the movement of the bolt, as well as a method that uses friction. In this post, we will look at another way to delay the movement of the bolt -- a method that uses some gas from the cartridge to delay opening the bolt, the Gas Delayed Lock.
In a Gas Delayed lock (as opposed to a gas operated weapon), when the cartridge has just been fired, the case of the fired cartridge tries to push the bolt backwards (all blowback pistols have a common property that the bolt is not locked at the moment of firing). However, some of the gas generated by the cartridge is bled off to a separate chamber that contains a piston and a spring. This piston offers extra resistance to the movement of the bolt and does not allow the bolt to move immediately. This allows the bullet to exit through the front of the barrel, taking most of the high pressure gas out of the chamber via the same exit. When the pressure in the chamber drops sufficiently, the bolt is now free to move backwards. 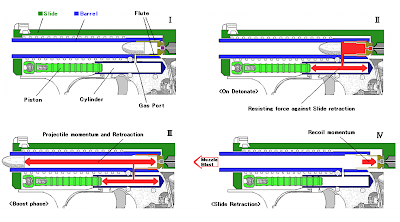 Public domain image. Click on image to enlarge.
In the above example, there is a hollow cylinder under the barrel which has a piston in it. The other end of the piston is attached to the front end of the slide. When the cartridge is fired, the gas pressure acts on the bullet and pushes it out of the barrel. The pressure also acts on the fired cartridge case, which attempts to move backwards and push on the bolt. However, some of the gas in the chamber is siphoned off and enters the cylinder underneath the barrel and pushes upon the piston. Since the other end of piston is attached to the front end of the slide, the slide now has two forces acting upon it: a force acting on the empty cartridge case that is trying to push it to the right, and a force acting on the piston, trying to push the slide to the left. As a result, the slide and the bolt don't move much at all. When the bullet exits the barrel, most of the high pressure gas leaves via that exit and the lower cylinder loses its pressure as well. As a result, the slide and bolt can now move backwards by momentum. This opens the breech and ejects the fired cartridge case.
The first use of this mechanism in a weapon was in the Volksturmgewehr 1-5 ("People's Assault Rifle"), also known as the VG 1-5. It was designed in 1944 by Karl Barnitzke towards the end of World War II, to be used by the Volksturm (a.k.a. "People's Militia"), which was a secondary force consisting of people in Germany between 16 and 60 years old, who were not already serving in the military in World War II. This weapon was designed to be cheap and easy to produce and used some parts in common with the StG 44 assault rifle.
The Barnitzke design was later used in the Swiss W+F 47 prototype pistol, the Steyr GB pistol, the Heckler & Koch P7 pistol and the Norinco M-77B pistol. In the case of the Norinco pistol, the M-77B is a bigger version of the M-77 and uses a bigger round. The gas delayed blowback system allows it to reduce the recoil of the weapon.
Posted by The Editor at 12:33 AM