In most of the previous methods we've studied, the method of reducing corrosion has been to infuse a thin layer of corrosion resistant material on the outer surface of the iron or steel parts of a firearm. In this post, we will study another method, where the material used to make the firearm parts is itself corrosion-resistant. We're talking about stainless steel.
Stainless steel is basically a steel alloy with at least 10.5 % chromium content by mass, or more. It does not stain as easily as ordinary steel, which is why it got its name. It also does not rust or corrode as easily as ordinary steel. Despite what the name suggests though, it is not completely stain-proof (or rust-proof, for that matter).
Some of the early research into corrosion resistant steels happened in Germany in the 1890s and 1900s and Krupp engineers even patented an autenitic stainless steel in 1912. It is fitting though, that Harry Brearley of Brown-Firth research lab of Sheffield, invented a martensitic stainless steel alloy in 1912, while they were seeking a better alloy for the manufacture of firearms! The lab was given a project to try and study how to reduce the erosion on the inside of barrels that is caused by high temperatures. Harry Brearley was in charge of researching this problem. By a stroke of luck, he noticed that one of his samples had shown no signs of rust, even after being immersed in water and exposed to air for a long time. He analyzed this piece of steel and determined that it was the high chromium content that was causing it to not rust and thus "rustless steel" was born in 1912. The name was later changed to "stainless steel" due to a suggestion from a local Sheffield firm that specialized in making cutlery items.
There are many different grades of stainless steel with differing mechanical and chemical properties. For firearms, the grade usually chosen is SAE 416 grade. This is a martensitic steel with sulfur content, that has good machining properties and can be hardened later with heat treatment. Due to its good machining properties, barrels made with stainless steel exhibit better accuracy than made with chrome-molybdenum steel. This is why target shooters prefer stainless steel barrels for their weapons. Stainless steel is more expensive though and also has slightly less life than chrome-molybdenum steel barrels due to less hardness, which is why military weapons use chrome-molybdenum steel.
The finish looks very much like a nickel plated steel weapon. Like nickel-plate, the finish can be bright, brushed or matte. However, since nickel plated steel only has a thin outer finish, it is subject to flaking and peeling off of the plated layer. This is not the case with a stainless steel weapon. 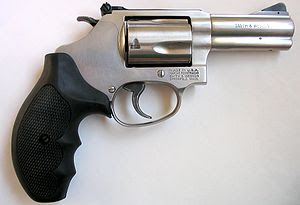 While there were revolvers with some stainless steel parts before, the Smith & Wesson Model 60 revolver pictured above has the distinction of being the first regular production model revolver to be completely made of stainless steel. It was been in continuous production since 1965. When it was first introduced, the model was so popular that most gun shops had a waiting list of 6 months to purchase one. 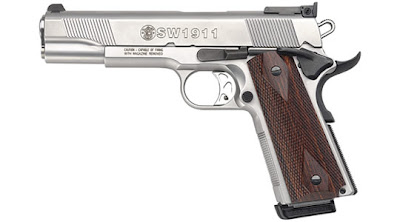 The above Smith and Wesson M1911 model is also made of stainless steel. Feel free to compare and contrast this with the 1911s that have been nickel plated and chrome plated. Smith & Wesson did not produce the first all stainless steel 1911 model though. That honor goes to the Arcadia Machine and Tool company which produced their all stainless-steel model of the M1911 in 1977.
Stainless steel does look better on some weapons and it is easier to machine, so that makes it easier for manufacturers. However, it also has some disadvantages. While it is rust resistant, it is not completely rust-proof and so, care of the weapon is recommended. Also, it is not quite as hard as a carbon-steel weapon, so stainless steel with bend and scratch easier than an equivalent blued carbon-steel weapon. Light scratches are easier to buff out on stainless steel though and will not show as easily as a blued weapon. Stainless steel is only hardened to about 25-32 HRC on the Rockwell Hardness scale, so it is not so hard as some of the other metal treatments. Galling of the moving parts was an issue with early stainless steel weapons, but the problem has largely been solved now with better lubricants.
Posted by The Editor at 10:08 PM