In our previous post, we discussed metal treatments such as browning and bluing. In this post, we will discuss another metal treatment that came into vogue shortly after the bluing process. This process is called parkerizing. The process is also known as phosphating or phospatizing. As the name indicates, parkerizing is a generic term for applying a coating of zinc phosphate, iron phosphate or manganese phosphate on a steel surface. The phosphate coating provides resistance to rusting, corrosion and wear. In addition, it reduces a highly reflective surface into a non-reflective surface, which makes it easier to aim a gun in bright sunlight.

The process of applying a phosphate coating was originally invented in the 1850s, but really became prominent in the 1900s, thanks to improvements done by the Parker Rust-proof Phosphating Company in the 1915-1945 period, who were responsible for making it possible to mass produce parts using this metal treatment process. In fact, the name "parkerizing" is derived from the name of the Parker Company.

The first appearance of a phosphate coating process came from England, patented by one William Alexander Ross in 1869. Thomas Coslett, also of England, developed another phosphating process, which he patented in Britain in 1906 and the United States in 1907. The Coslett process was an iron phosphating process, and in 1912, an American named Frank Rupert Granville Richards, invented the manganese phosphating process, for which he was granted a separate patent. Another American, Clark W. Parker, bought the patent rights to the Coslett and Richards processes, and after making several experiments in his home kitchen, went on to found the Parker Rust-proof Phosphating Company of America in Detroit in 1915, along with his son, Wyman C. Parker.

By 1919, the Parker company had managed to secure a patent for an improved manganese phosphate coating process. In 1929, they filed another patent which reduced the time of coating to 1/3rd of the previous time, by heating the solution and controlling the temperature to a very precise range of 260-285 degrees centigrade. During this time, the Great Depression set in, and along with it, Clark W. Parker and his son, Wyman C. Parker, were both convicted of investor fraud, for a scam involving shares in an automobile company and two other companies they'd founded. Despite the imprisonment of its founding owners, the Parker Rust-proof Phosphating Company continued its business. Manganese phosphate was a somewhat expensive process because of limited availability of manganese compounds in this period. In 1938, the company was granted a patent for inventing a zinc phosphate coating process, which came just in time, since World War 2 started soon after, and the United States lost access to some of its main sources of manganese. On the other hand, the United States had plenty of access to zinc ores and thus this process became much more cheap than using manganese. By 1941, the company had discovered a way to carry out the zinc phosphating process even more faster and cheaper than before. By adding a bit of copper, they could reduce the alkalinity of the solution, and by adding a chlorate to the nitrates in the solution, they could reduce the temperature of the solution to 46-54 degrees centigrade, which made it possible to make it a very efficient process.

The Parkerizing process was used to coat many of the small arms made by the United States during World War 2. It was also used to protect vehicle parts and aircraft parts during this period. This is when the process really became famous.

The modern parkerizing process consists of the following steps.

The steel part develops a light gray to dark gray coating depending n the solution used. After a few years, the parkerized surface turns into a greenish-gray color. 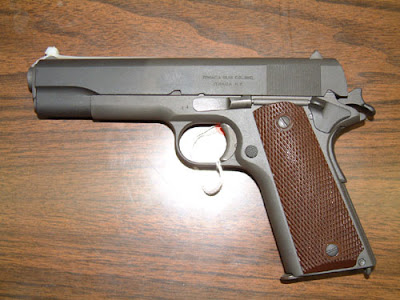 The above picture shows a beautifully parkerized M1911 after a few years. Note the greenish-gray shade of the finish.

Now for some pictures showing how the process is done, from start to finish from http://www.theboxotruth.com/. Note that, unlike the hot-bluing process we studied in the previous post, this process does not need a factory environment and may also be carried out at home. The pictures show a person carrying out the process in his kitchen, after purchasing some parkerizing solution at his local sporting goods supplier.

First, we start with a "before picture", i.e. before the parts were parkerized. Note the finish of the weapon and the wooden handgrips showing lots of wear and tear. The old finish that was on the gun had worn off almost completely. The author bead-blasted the remaining off before starting the parkerizing process. 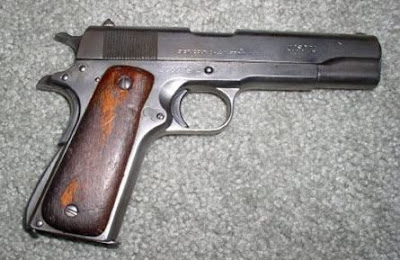 The first step is to disassemble the weapon and wash the parts to be parkerized in a detergent to remove dirt, oil and grease. 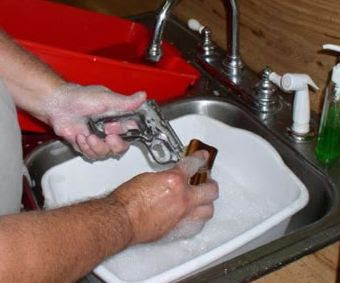 The next step is to rinse in clear hot running water a few times, to remove all traces of the detergent. 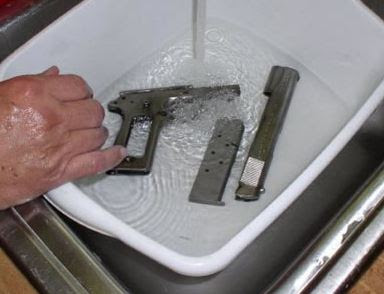 Then, a parkerizing solution is prepared in a separate stainless steel pot. The person used 1 part of solution to 5 parts of water in this case. The pot is heated on a stove to about 85-95 degrees centigrade and then the steel parts are suspended from a wooden plank into the parkerizing solution. Bubbles rise from the solution as the coating starts to take place. 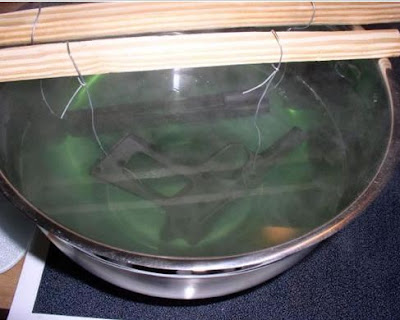 After 15 minutes, the parts are taken out, rinsed in running water to remove any traces of parkerizing solution and dried on a towel. They are then oiled. 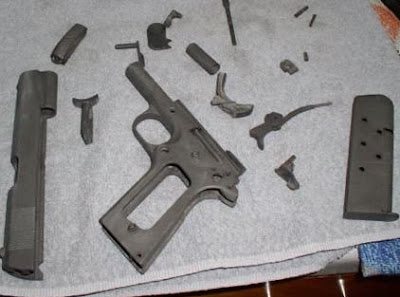 The person then bought two fake-ivory plastic handgrips from his local sporting goods supplier, to replace the original worn out wood handgrips. The final reassembled pistol that looks like this: 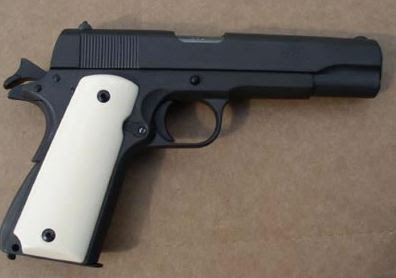 Note that the fresh coating is dark-gray in color now, but it will change in a few years time into a greenish gray finish, without losing any of its corrosion and wear resistant properties.

The advantages of this process are many. It produces a corrosion and rust resistant finish, but is also much more durable than bluing. It is also a very cheap process. Unlike hot-bluing, this doesn't require a factory environment to perform the process and it may also be done by hobbyists. The chemicals required for parkerizing are all sold by most major gun parts suppliers in the United States. It also reduces the glare of the treated parts.

The downsides are that this can only be performed on certain steel parts. It cannot be carried out on stainless steel or steel containing large amounts of nickel. It also cannot be done on non-ferrous metals. Traditional parkerizing process has recently also been criticized for adding large amounts of phosphorus impurities to the used water, which encourages rapid algae growth.