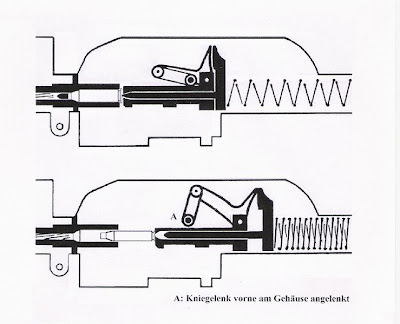 Image taken from wikipedia.org, uploaded by user Hmaag under a Creative Commons Attribution-Share Alike 3.0 license.
The bolt of this weapon has a hinge joint attached to the middle of it. The back of the crank is attached to a rear of the receiver via a fixed pin. Initially, the crank is at a near horizontal position. When the cartridge is fired, it pushes back on the bolt, which in turn applies its force to the front part of the crank. At this point, the crank pivots upwards until is is nearly vertical and provides significant mechanical resistance to the backward movement of the bolt because of the mechanical disadvantage applied. This resistance is enough to delay the movement of the bolt until the bullet has left the front of the barrel, along with most of the high pressure exhaust gases. When the crank reaches its near vertical position, the resistance to backward motion significantly decreases and the bolt can now move backwards. The empty cartridge case follows the bolt and is ejected via a side port. The bolt moves back and recocks the weapon automatically. When the bolt reaches the rearmost part of its travel, it is pushed forward by the recoil spring at the end. The bolt moves forward and picks up another cartridge from the magazine and it is now ready to fire.
This mechanism was used in only a couple of weapons: the Schwarzlose machine gun and the Pedersen rifle, designed by noted American designer John Pedersen.

The above image is a patent application by John Pedersen for his Pedersen rifle.
Posted by The Editor at 1:18 AM