When we think of the words "mechanical advantage", the first object that many of us think about is the simple lever. We use a straight rod as a lever, balance it about a fixed pivot (fulcrum) and place the heavy object under the short-end of the lever. We then pull on the long end of the lever. Since we're pulling on the long end, we don't have to apply as much force, but we have to move the lever through a longer distance to move the object a short distance.

This is the principle of the lever-delayed blowback action.

Click on image to enlarge and view the animation in all its glory.
The original image disappeared from the web around May 2013. Luckily I was able to restore it from backup.

In the above image, we have a pretty good animation of how the lever-delayed action works. When the cartridge is fired, the rear movement of the spent cartridge case (the yellow part) acts upon the blue bolt. Before the bolt can move much though, the gray lever rotates and moves the red bolt carrier first, which moves a long way for the short movement of the bolt (the leverage principle we just talked about above). This leverage acting on the bolt carrier increases the force of resistance to movement and slows down the movement of the bolt itself. Once the lever has reached an approximately horizontal position, it ceases to act as a lever and the bolt and the bolt carrier move backwards together at the same speed and are followed by the empty fired cartridge case as well. This extra initial delay in the movement of the bolt serves to keep the gas seal fairly tight until the bullet has left the front end of the barrel and most of the high pressure gases have also gone out the front. 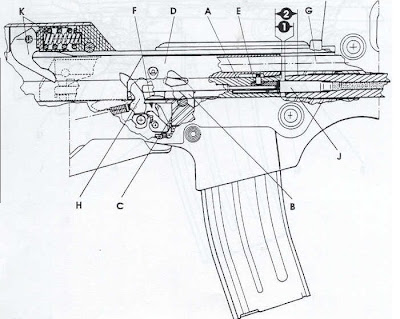 The picture above shows the drawing of an actual weapon (a French FAMAS assault rifle) that uses the lever delayed blowback action. Initially, the cartridge J is in the breech and the hammer H is cocked. When the trigger is pulled, the hammer H releases and strikes the back of the bolt A and the long firing pin E, which strikes the base of the cartridge J, igniting its primer and burning its propellant material. As the bullet begins to leave the front of the barrel, the empty cartridge case J now pushes back on the bolt A, which in turn transmits the force to lever B. The lever B rotates about the pivot C and moves the bolt carrier D faster than the bolt A. Due to this leverage being applied to weight of D, extra force must be applied to A initially to move it. As long as B is rotating, bolt A moves backwards a lot slower than D and therefore the breech stays practically shut. Once B has reached a horizontal position, it ceases to act as a lever and then both A and D move backwards at the same rapid speed, opening the breech. The case J also follows A backwards and is ejected out of a side port due to a spring inside the magazine that is pushing new cartridges upwards. The backward movement of A also compresses a recoil spring in the tube G and also cocks hammer H on the way back. The sear spring mechanism F holds down the hammer H after it is cocked and while the bolt is moving backwards. The bolt moves backwards, continuing to compress the spring G, until it is slowed down to a stop by G and the additional lever and spring K at the back of the weapon. These two then push the bolt forward whereupon it picks up the new cartridge from the magazine and moves it forward into the chamber.

Since this action uses the principle of leverage between A and D, the weights of A and D can be relatively light, since the leverage is what provides the resistance to backward movement of the bolt. This means the weapon can be much lighter than one that is using a straight blowback action. Conversely, the weight savings gained from the lighter action can be re-used to make a heavier barrel and chamber and therefore it can fire a much more powerful cartridge than a straight blowback weapon.

The first lever-delayed blowback action was invented by the famous Danish born US firearms designer, John Pedersen. However, it was perfected by the noted Hungarian firearms designer Paul Kiraly in the 1930s. This action is not used in many weapons, but the most famous current user of this action is the French FAMAS assault rifle.

The FAMAS itself was heavily influenced by the mechanism of the French AA-52 LMG, which was developed after the 1950s and also uses a lever delayed blowback action. The FAMAS is significantly lighter than most assault rifle weapons of its class. Other users of this action include the Dominican Republic San Cristobal 0.30 carbine (designed by Paul Kiraly after he fled Hungary during the communist revolution and settled in the Dominican republic) Brazilian BSM/9 M1 submachine gun, the Italian Benelli B76 pistol and a series of Russian firearms designed by Anatoly Baryshev (AB-7.62, AVB-7.62, LCZ B20).

As an interesting side note, there was also a Soviet assault rifle called the TKB-517 that was developed in the 1950s by a Russian firearms designer named German A. Korobov. Mr. Korobov initially experimented with various assault rifle designs using gas delayed blowback operation throughout the late 1940s. While his earlier attempts were accurate enough, they were not as reliable and therefore, he switched to using a Paul Kiraly designed lever delayed action in 1952, which gave him better accuracy as well as better reliability. In the mid 1950s, the Soviet military decided that they needed to replace the original AK-47 assault rifle with a better design and opened a competition to develop a replacement. The TKB-517 rifle was submitted to the competition against a modified Kalashnikov AK-47 and some other competing designs. The TKB-517 was found to be the most accurate and controllable of all the designs submitted, especially in fully automatic fire mode. It was also much lighter and cheaper to manufacture than even the modified AK, which is quite an achievement in itself. However, the Soviet military decided that the less accurate, more expensive, but familiar and already well established Kalashnikov design was preferable to the more accurate, cheaper, lighter, but newer design TKB-517 and hence, the winner of the competition was declared to be the Kalashnikov designed modified AK, the AKM, which is the most widespread assault rifle in history.