In our previous post, we studied the basics of the blowback action and learned a few things.

Therefore, there must be some method used to delay the backward movement of the bolt after the cartridge is fired.

As we saw in our previous post about straight blowback actions, one way to achieve this is to use a bolt that is much heavier than the bullet and use a stiff spring to hold the bolt in place. That way, when the high pressure gas acts on the bolt, it does not move much right away because of inertia. By the time the bolt and fired cartridge case start moving backwards, the bullet has already left the front of the barrel along with a lot of the high pressure gas, the pressure inside the chamber has already dropped to a much safer level and the bolt and cartridge case are moving back mostly due to momentum. Unfortunately, this makes the weapon much heavier than normal and harder to cock initially, as the user has to apply much more force to move a heavier bolt and stiff spring. Therefore, weapons that use straight blowback tend to use smaller and low powered cartridges to be suitable for practical usage by normal users.

Another alternative is to develop some kind of mechanism where the bolt encounters some higher resistance when initially trying to move backwards. This ensures that the bolt is delayed from moving backwards immediately after the cartridge fires and it doesn't move until the bullet has left the barrel. The idea is to put the bolt under some kind of mechanical disadvantage, so that much more force is required initially to move the bolt backwards. With such a mechanism, there is no need for a heavier bolt or stiffer spring and therefore the whole weapon can be lighter. Conversely, the weapon can also fire higher powered cartridges since the weight savings gained by a lighter bolt can be used to make the barrel heavier and breech mechanism stronger.

One way to do this is to use rollers to delay the bolt. Such an action is called roller delayed blowback. The most well known weapons that use this action are the Heckler & Koch G3 rifle and the Heckler & Koch MP-5 submachine gun.

The history of this type of action dates back to the middle of WW-II when it was used for an MG42 derivative and the Mauser StG 45. After the war, Mauser's factories were taken over by the French government and reorganized under a French organization called CEAM. Two of the former Mauser engineers, Dr. Ludwig Vorgrimler and Theodor Loffler were employed by CEAM and together perfected the roller delayed blowback design. Although they perfected the design based on the Mauser StG 45 cartridge (7.65 x 35 mm.), the French military then wanted to use a US designed .30 cartridge instead and so they were told to redesign for the new carbine. The French government also got involved in Vietnam by 1949 and therefore cancelled the project for lack of funding. Dr. Vorgrimler later left CEAM in 1950 and went on to join the Spanish company CETME, where they had already recruited some other former Mauser workers, as well as some others from another major German weapons manufacturer from world war II, Rheinmetall GmBH. Therefore, it was CETME that released the first commercial rifle using roller-delayed blowback, rather than CEAM. The post-war West German government was interested in the CETME design and licensed it for manufacture by Heckler & Koch and Rheinmetall. The result was the development of the Heckler & Koch G3 rifle. Dr. Vorgrimler was later employed by Heckler & Koch in the 1960s and went on to develop many more successful designs including the MP-5 submachine gun, which is still used by many forces worldwide.

The principle of the roller delayed blowback is to use two small masses (i.e. the rollers) usually attached to the bolt and arranged so that they move at nearly right angles relative to the bolt, at the moment of firing. The roller mechanisms act like levers and effectively multiply the mass of the bolt and bearings, which means that greater force is required to move them. The extra mechanical work that must be done to overcome this force generally allows the pressure in the barrel to fall to a lower level by the time the bolt starts to move backwards and thus delays the motion of the bolt until the bullet has left the barrel and the pressure has already dropped to a lower level. 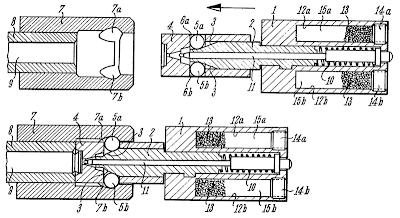 When the weapon is cocked, the rollers (5a and 5b in the patent drawing) lock into the recesses in the trunnion (7a and 7b) and the face of the bolt head (4) sits flush against the base of the barrel, providing a tight seal. When the cartridge is fired, the bolt tries to move backwards and forces the two rollers (5a and 5b) against the locking piece (2). The locking piece, in turn, pushes against the bolt carrier (1) and the spring locking lever. The rollers act as levers and effectively multiply the mass of the bolt, which increases the force needed to push the bolt back. Once the rollers are pushed out of the trunnion recesses and are inserted back into the bolt head, the whole bolt assembly can now move backwards much easier. The bolt then moves back against spring pressure from the recoil spring (10) and the empty cartridge case can be extracted and ejected out of a port on the side of the weapon. When the bolt moves backwards to its maximum position, the recoil spring then pushes the mechanism forward whereupon, it picks up the next cartridge to fire from the magazine and loads it into the chamber.

The next figures from hkpro.com also make the concept very clear. 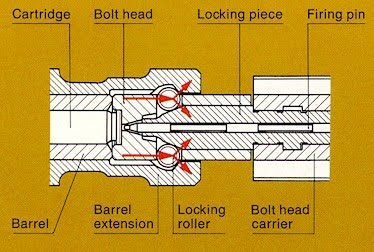 As the bolt head moves backwards, the force is transmitted from the bolt head to the rollers, as indicated by the horizontal red arrows. The rollers in turn, split the forces to the barrel extension and the locking piece, as indicated by the other red arrows. Approximately 75% of the force goes to the barrel extension and only 25% to the locking piece.

The extra force that is need to push the rollers out of the recesses and back into the bolt delays it enough for the bullet to leave the barrel and take most of the high pressure gases out of the front of the barrel. As a result, by the time the bolt starts moving backwards, the pressure of the gases in the chamber have dropped to a much lower level. 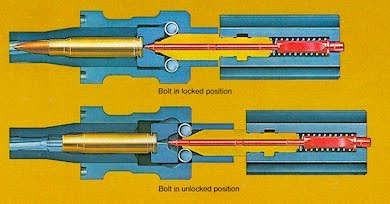 Image taken from hkpro.com. Unfortunately their web-server keeps going up and down, forcing me to not link to them directly.

In the above figure you can see the position of the rollers from where the bolt is in a locked and unlocked position. Once the rollers have moved out of the trunnion recesses, the whole bolt assembly moves back easily, just like in a straight blowback system; and the empty cartridge case moves back with it and is ejected out of the receiver.

There are some advantages and disadvantages of a roller delayed blow back system.

Advantages:
Disadvantages:
Though CETME invented the first commercial rifle using this action, Heckler & Koch are the best known users. Several Heckler & Koch products such as the G3 rifle, MP-5 submachine gun, P9 pistol, HK-21 and HK-23 machine guns, SL-6 and SL-7 hunting rifles all use this mechanism. Other users of this action include the Swiss SIG SG 510 rifle and CETME rifles such as the modelo A, B, C, L and LC .
Posted by The Editor at 9:17 PM