The blowback action is one of the more common actions used in modern firearms today. It is mostly seen in smaller caliber automatic and semi-automatic weapons such as the Uzi, Sten gun, Ingram MAC-10, Walther PP series (the Walther PPK is usually what fictional spy James Bond usually uses), Makarov etc. Actually there are many different systems that utilize variants of the blowback principle, so the next few posts will be devoted to studying these many variants.
The main principle behind a blowback action is that, at the moment of firing, there is a block of metal called a "bolt" that holds the cartridge in place. This bolt is not locked down, but is held in place by spring pressure. This is a very important point and is the main feature of a blowback action. When the cartridge is fired, the bullet flies out via the barrel and the expanding gases also push against the cartridge case which is still in the barrel. The cartridge case acts somewhat like a piston and in turn pushes on the bolt, which then moves backwards and recocks the weapon. At about the same time, an opening on the top or the side ejects the old spent cartridge case.
The following diagrams will make the concept clear. 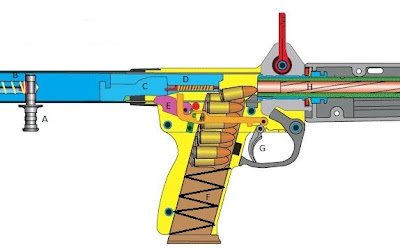 In the above figure, we have the bolt in blue. The bolt handle A is used to pull the bolt backwards initially against spring pressure from recoil spring B. This moves the whole bolt (the blue piece) backwards. C is a cavity in the bolt, where hammer E (in rose color) can move). D (in red) is the firing pin. When the gun is initially loaded, a magazine containing cartridges is first inserted into the weapon. Then, handle A is used to pull the bolt back as shown in the figure above. As a result of this, the hammer E rotates about its axis and is cocked. At the same time, due to the pressure of magazine spring F, a new cartridge is pushed upwards into the receiver. When the bolt handle A is released, the front face of the bolt (the blue part) pushes the cartridge forward so it is pushed into the chamber in front of barrel H. The hammer E still remains in its near horizontal position because it is held in place by the trigger bar (which is orange) connected to trigger G.
Now the user pulls the trigger and the following happens: 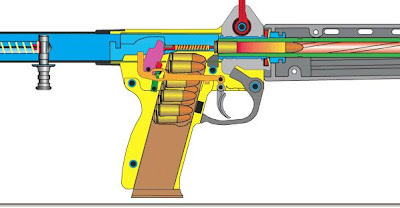 The user pulls the trigger and the trigger bar releases the hammer E, which rotates about its axis inside cavity C and strikes the firing pin D hard. The other end of the firing pin strikes the base of the centerfire cartridge, which detonates its primer and then ignites the main propellant material in the cartridge. The expanding gases drive the bullet through the barrel H and also push back on the empty cartridge case left behind in the chamber, which in turn pushes back on the bolt. 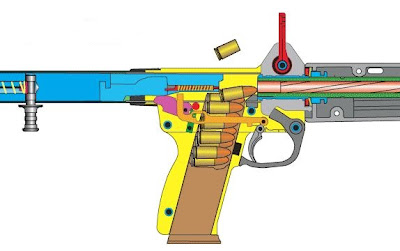 The entire bolt assembly (the blue part) now moves backwards due to the pressure from the gases acting on the (now-empty) cartridge case. As a result of the bolt moving backwards, the hammer E is now rotated back down until the orange trigger bar holds it down Meanwhile, the opening on top of the receiver is now open and the old cartridge case is pushed out through here by the action of magazine spring F. The bolt moves backwards and compresses the recoil spring B. When the bolt has moved backwards to its utmost, the recoil spring B then expands and pushes it forward into place. While moving forward, the bolt picks up the new cartridge and pushes it into the chamber and the gun is now ready to fire again.
Obviously, for best results, the bolt should not start to move backwards before the bullet has left the barrel and the pressure in the chamber has dropped to a safe level (you don't want a lot of high pressure gas to flow back into the magazine area and out the ejection port and blow out everything in between). In a straight blowback action, this is achieved by making the bolt much heavier than the bullet mass. Therefore when the cartridge is first fired, the bullet shoots out the barrel, but the force acting on the empty case doesn't push the bolt back instantly due to its inertia. By the time the bolt starts to move backwards, the bullet has left the barrel already and pressure of the gas in the chamber has already dropped to a safe level and the bolt and empty cartridge case are moving back on pure momentum alone. Given the larger mass of the bolt and the stiff recoil springs, blowback weapons are usually a bit harder to cock initially. That is why, for most practical purposes, blowback weapons generally tend to use smaller and lower powered ammunition.
The following video shows a MAC-10 submachine gun, which uses a straight blowback action.

And now, a girl firing a Walther PPK pistol. Notice in the beginning of the video about 10 seconds in, when she loads the pistol and pulls the slide back the first time to cock it.

As we alluded to above, in a straight blowback action, the bolt assembly has to be heavy so that it doesn't move back the instant the cartridge fires. As a result of this, straight blowback weapons tend to be heavier than other similar sized counterparts that use different mechanisms. Some manufacturers, such as Hi-point Firearms, try to get around this by making the other parts of the weapon out of lightweight polymers. While using plastics does reduce the weight of the firearm a bit, they are still heavier than, say, recoil action firearms. On the other hand, the mechanism is very simple and easy to manufacture than a recoil action.
In the next few posts, we will study other blowback actions that use different ways of delaying the bolt assembly from moving backwards when the cartridge ignites.
Posted by The Editor at 10:39 PM