One of the earliest automatic weapons was the Gardner Gun, invented by one William Gardner of Toledo Ohio. Mr. Gardner had served on the Union side during the US Civil war and had witnessed the power of the Gatling gun. He soon came up with his own design of a machine gun in 1874 and made a hand-made prototype. Having no funding available to him, he sold the manufacturing rights to the newly formed firm of Pratt and Whitney of Hartford, Connecticut under the condition that they would pay him a royalty fee for every weapon sold. As we've seen before, Francis Pratt and Amos Whitney were two experienced engineers who had met when they both worked in Samuel Colt's firearms factory, inventing machines to manufacture firearms quickly. They set to work automating the process of building the Gardner gun and within a year, had turned it into a design that could be presented to a military selection committee. 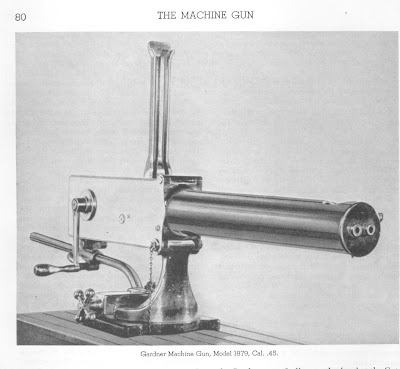 The design consists of a single or a twin barrel gun (such as the one shown above). The barrels are encased within an outer cylindrical jacket that can be filled with water, to prevent the barrels from overheating. A vertical magazine at the rear of the weapon contains cartridges ready to be loaded into the weapon. The hand crank on the side of the case operates the weapon. The barrels are loaded, fired and unloaded alternately with a single turn of the hand crank.
To facilitate faster loading, centerfire cartridges are placed into a wooden block with their rim ends protruding. The wooden block is moved so that the rim ends of the cartridges align with the feed slots (which are T-shaped) of the magazine. Then the wooden block is removed and leaves behind the cartridges with their rims inside the feed guide slots. 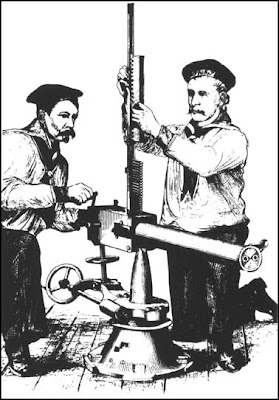 To fire the weapon, one man fills the feed slots with new ammunition and another one aims the weapon and turns the crank. As ammunition is used up, the first man can continue refilling the magazine from the top as needed.
A couple of improvements were made by Pratt and Whitney, which were not part of the original Gardner design: The feed system was improved using cams and levers to take a round and move it positively into place, instead of the earlier gravity feed. They also improved the extractor device and added features to cock the firing pin very slowly to prevent accidental discharges. They also added a safety mode that allowed users to run ammunition through the weapon without firing. An illustration of the firing mechanism is shown below. 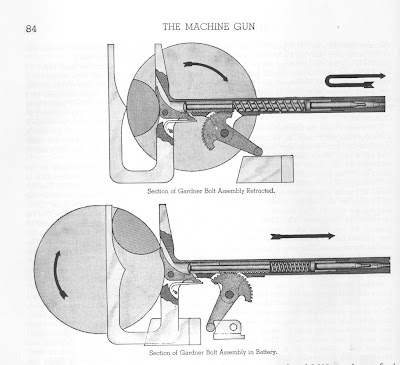 The Gardner gun was demonstrated successfully to the US Navy board by Francis Pratt and Amos Whitney themselves. The Navy adopted this weapon and purchased a limited number of them. Unfortunately, the US Army was less interested in this weapon. However, a presentation made in front of the British Navy was much more successful and they bought a license to produce the gun in Europe. One of the major advantages of the Gardner gun over its rivals was that it was a lot lighter than its competitors (various Gatling gun models) and had a higher rate of fire. The British Navy purchase was soon followed by another British order for all branches of their military and they used the weapon in a few African wars in Sudan and the Upper Nile.
Posted by The Editor at 5:58 PM