Since the early days of gun-making, people were looking for different ways to better protect the iron and steel parts of their weapons. There are actually two forms of "bluing", one is called "cold bluing" and the other is called "hot bluing". We will study both processes here. We will also study the process of "browning".
So what is the purpose of these processes. The purpose is to provide a thin coating on the outside of the iron and steel parts, so that they are protected from rusting and corrosion. The idea is to intentionally rust the outside surface of the part (such as the barrel) and then stop the rusting processes. The outside layer then protects the inside parts from further rusting and corrosion. Additionally, these processes reduce the glare of what would otherwise be a very shiny part. It is much harder to aim an untreated barrel in broad daylight, since the glare of the sun's rays reflect off the shiny barrel into the user's eyes.
Browning and Cold Bluing are actually very similar processes, with just one minor difference, so we will do well to study both these processes together. The process of browning is the older process and has been known for centuries, even before firearms were invented. In Europe, this process was originally called "russetting" and the term "browning" came to be used later. Later on, a modified browning solution and process resulted in a dark blue/black finish, which began to be known as "bluing". It has been theorized that the result of browning its barrel is what gave the Brown Bess musket its name.
The compositions of browning solutions was a very closely guarded secret among old-time gunsmiths. However, as the centuries passed, different people came up with various formulae to achieve the same effect. The end result is that today there are literally hundreds of browning solutions available. One of the more common ones was using salt-water, which has been known as a rusting agent since the Iron Age. Salt water was definitely used at least until the middle 1800s or so. There are other solutions involving strong acids, metallic salts, chlorides, antimony etc. In general, concentrated browning solutions act more rapidly than diluted ones, however the diluted solutions provide coatings of better durability, appearance and closer grain finish. Also, old time gun barrels were non-uniform in composition, so a concentrated solution could quickly produce a non-uniform finish, which is why weaker solutions were preferred. Also, since each manufacturer used a different steel alloy in their guns, what would work with excellent results for one manufacturer's guns would not work the same way for another manufacturer's guns.
The formula for the solution used for the Brown Bess musket (taken from General Regulations and Orders for the Army, 1811) is as follows:
Water is used to dissolve the copper sulphate first and the rest of the ingredients are added to the solution and more water added to make up 1 quart of solution. Other solutions may also be used depending on the type of iron or steel alloys used in the weapon.
The browning process starts as follows: The barrel is first removed of all greasy impurities by washing with soap or detergent. Then a plug of wood is placed on both ends of the barrel to make sure that the insides are sealed and only the outsides are rusted. The barrel is hung in the air and then the browning solution is thoroughly applied to the outside with a clean cloth or sponge. The barrel is left exposed in the air for about 24 hours, after which a thin layer of reddish brown rust is formed on the surface. After this, the barrel is "carded" by rubbing it with a hard brush or steel wool, which removes the acid from the surface. The whole process is repeated for two or three times to get the desired shade of reddish-brown finish on the barrel. The barrel is then cleaned and oiled. The same process may also be carried out on the other iron or steel parts of the gun as well. 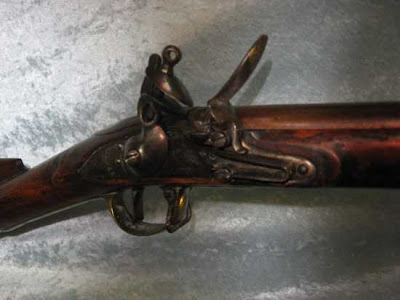 A Brown Bess musket with a characteristic browned barrel
It was later discovered that before carding, if the part is immersed in boiling hot water first, this stops the rusting process. Additionally, the part turns a deep blue or black color instead of reddish brown. This is due to the black oxide of iron (Fe3O4) being formed instead of the red oxide of iron (Fe2O3). This process is called "cold bluing" instead of "browning" and is the only real difference between the two processes.

Browning and cold bluing add a very thin layer of protection, which does not provide any appreciable extra thickness to precisely machined parts. However, they do not provide any different hardness to the surface and hence offer no extra protection against wear. The process is also an extremely slow, labor intensive process and therefore it is currently used by small one man shops and hobby experimenters only and not large manufacturers.
Instead, what some modern manufacturers use is the hot bluing process. In this method, the parts are initially degreased, as in the browning and cold-bluing processes. Next, the steel parts to be blued are dropped in a hot solution of potassium nitrate, sodium hydroxide and water. Stainless steel parts are dropped in a hot solution of nitrates and chromates. The process causes a layer of black oxide of iron (Fe3O4) to form. Care must be observed during this process as these solutions will eat through leather, wool, skin etc. and the fumes can cause deterioration of any metals in the area. Hence, hot bluing is best left to factory environments and not suitable for home experimenters. After a while, the parts are removed and rinsed in hot water to stop the bluing process. The parts are then oiled and reassembled. 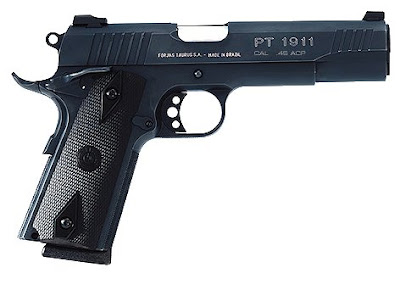 The above example is a Taurus pistol based on the famous Colt M1911 pistol. Note the beautiful dark blue parts of the weapon.
Hot bluing is the best of all three processes when it comes to corrosion resistance and rust protection. It is also much faster to manufacture and provides the best looking finish of the three methods. Hence, this is the method often used by modern manufacturers. The only downside to hot bluing is that the chemicals used are corrosive and hence it is best done in a controlled factory environment.
While bluing is the least expensive method of finish, it is not the best protection against rust compared to some other modern finishing methods. It also only works on ferrous materials, steel or stainless steel parts and doesn't work on other materials such as aluminium alloys. We will study some of the other metal treatment methods in the following days.
Posted by The Editor at 9:58 PM