In the last few posts, we have been studying single action revolvers, such as the Paterson revolver, the Colt Dragoon and the Peacemaker. With a single action revolver, the trigger only serves to release the hammer. To operate the weapon, the user manually pulls the hammer back, which cocks the weapon and rotates the cylinder to the next chamber. Then the user pulls the trigger to fire.
In the 1850s, another mechanism called the "Double Action" was invented. It all started with the Adams revolver from England. The inventor was one Robert Adams, who was a manager for a London based manufacturer called George & John Deane. He invented a revolver where pulling the trigger cocked the hammer, rotated the chamber and then released the hammer, all with a single trigger pull. 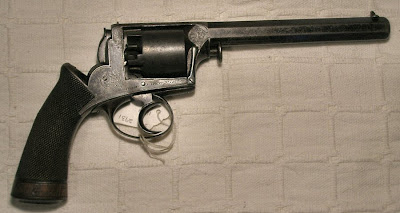 The revolver uses a percussion cap firing mechanism and has a cylinder that has 5 chambers in it. As you may notice, this revolver's hammer does NOT have a spur at the back, so the user cannot thumb the hammer back manually to cock it. Instead, pulling the trigger cocks the hammer back and then releases the hammer to fire it. This means, it has a longer (and harder) trigger pull than a single action revolver like the Colt and Smith & Wesson products of this period. On the other hand, rate of fire is much higher than a single action revolver, because the user doesn't need to cock the hammer separately before pulling the trigger.
The Adams sold fairly decently in England, and was actually approved by the British Small Arms Committee and also for the East India Company as well. In fact, the Deane company even went to the extent of making Adams a partner of the company and renamed themselves from Deane & Deane to Deane, Adams and Deane.
While it was a highly regarded weapon, the revolvers were essentially hand-made. Thus, production was slow and more expensive and quality was also somewhat uneven. This made it lose out to the Colt in the American market. Since the parts were hand fitted in the end, interchangeability was not a strong point for the Adams. It also had no recoil shield in the back of the cylinder, so the user could get their hands dirty caused by blowback from the chambers. The nipples that the percussion caps sat on were also not hardened, so they could sometimes explode prematurely. This revolver was strictly a DAO (Double Action Only) as opposed to a pure double-action revolver. Since it was double-action only, that means the user couldn't pull back the hammer manually. In fact, it even dropped extension on the hammer to prevent users from pulling the hammer back manually. This meant it had a longer trigger pull than a single-action revolver and this led to less accuracy.
The British Ordinance Board studied the Adams revolver along with a few other competing products in 1853, with the view of adopting one for general military use. While there was no firm conclusion, a number of officers bought one as an unofficial standard side-arm and these saw some use in the Crimean War.
The Crimean war saw the first competition between single-action (mostly Colt Navy 1851 model) and the double-action Adams revolver in a real conflict. It was found that the single action Colt was more rugged and reliable than the Adams revolver. However, in the type of fighting experienced in Crimea, the slower thumb-cocking method of the single-actions was seen as less useful compared to the rapid fire capability of the double-action revolvers.
J.G. Crosse of the 88th Regiment of Foot wrote a personal letter to Adams: "I had one of your largest sized Revolver Pistols at the bloody battle of Inkermann, and by some chance got surrounded by the Russians. I then found the advantages of your pistol over that of Colonel Colt's, for had I to cock before each shot I should have lost my life. I should not have had time to cock, as they were too close to me, being only a few yards from me; so close that I was bayoneted through the thigh immediately after shooting the fourth man."
One of the veterans of the Crimean war was Lieutenant Frederick E. B. Beaumont of the Royal Engineers. During the war, he came up with a design that improved the flaws of the Adams revolver. After he was granted a patent, he went to the firm of Deane, Adams and Deane, the makers of the Adams revolver and offered them the rights to manufacture his improved design. The resulting revolver was the Beaumont-Adams revolver. 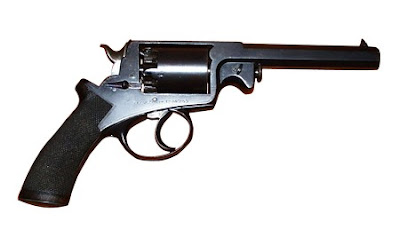 Like the previous Adams revolver, this one also has a cylinder that holds 5 bullets. It also fires by merely pulling the trigger, which cocks the hammer, rotates the cylinder to the next chamber and then releases the hammer. Unlike its predecessor, this one also has a spur on the back of the hammer. This allows the user to use their thumb to pull back the hammer to cock the weapon, which also rotates the cylinder. Pulling the trigger then releases the hammer. This weapon was the first true double-action revolver as we know it. The Beaumont-Adams also fixed some of the other issues with the Adams, such as hardening the percussion cap nipples. This weapon was adopted as the official revolver of the British Army in 1856.
During the Indian Mutiny, the effectiveness of the Adams and the Beaumont-Adams revolvers came to the forefront again, where not only was the Colt's slowness called into question, but also its perceived lack of stopping power versus the British revolvers. A damning report was submitted by Lt. Col. George Vincent Fosbery: "An officer, who especially prided himself in his pistol shooting, was attacked by a stalwart mutineer armed with a heavy sword. The officer, unfortunately for himself, carried a Colt's Navy pistol of small caliber and fired a sharp-pointed bullet of sixty to the pound and a heavy charge of powder, its range being 600 yards, as I have frequently proved. This he proceeded to empty into the sepoy as soon as he advanced, but having done so, he waited just one second too long to see the effect of his shooting and was cloven to the teeth by his antagonist, who then dropped down and died beside him. My informant told me that five out of the six bullets had struck the sepoy close together in the chest, and all had passed through him and out of his back." Reports like these commonly emerged from the Indian Mutiny and it wasn't long before the double action British revolvers began to grow in popularity because of their rapid firepower and superior stopping power. By the end of 1857, Colt had to close down their factory in London due to dropping sales.
Robert Adams later split from Deane & Deane and went on to found the London Armory company which made several Beaumont-Adams revolvers in calibers like .442, .479, .50, .338, .32 etc. Some were also license-made in the US by the Massachusetts Arms Company, which made holster and pocket-sized models. So many were imported and used by both sides of the Civil war, that the most common double-action revolver used was the Beaumont-Adams.
One of the issues of the Beaumont-Adams was that it still used percussion cap technology. Its replacement in 1880 was the Enfield Mark-I which used centerfire cartridges filled with black-powder. However, the Beaumont-Adams was a revolutionary weapon because it was instrumental in developing the modern double-action, which is still the mechanism of choice in today's revolvers.
Posted by The Editor at 12:54 AM